If dances could be granted Landmark status, Joshua Beamish’s Saudade would qualify. Not because it’s all male, and not because it relates male/male relationships, though that’s an essential component of the dance, but because it’s groundbreaking, and because it’s good.

Perhaps best known, at least to ballet audiences, for his collaborations with former New York City Ballet principal dancer Wendy Whelan, Beamish has long enjoyed a favorable reputation among denizens of contemporary dance for the purity of his choreography and the sincerity of his emotional input. Saudade has both qualities, and I suspect is something that’s been bottled up for a long time. 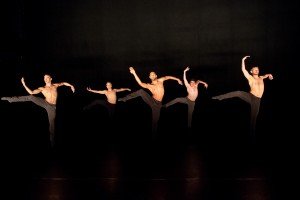 Saudade is a Portuguese word. When I looked it up, I found terse translations: nostalgia; longing; missing; yearning. The program note expands on that, describing the word as “a vague, constant desire for a reality that does not, and probably can not, exist. It is the love that exists after someone is gone. It describes a deep emotional state of profound melancholic longing, often carrying a repressed knowledge that the object of longing might never return. To feel saudade is to feel a deep incompleteness and recognize it as familiar.”

This is an appropriately romanticized elaboration, and an apt description of the dance. But any implication that the relationships depicted in Saudade reflect some reality that doesn’t exist – other than a more “standard” questioning of whether an ended relationship ever really happened [e.g., was she (he) reality or just a dream] – isn’t there. Indeed, the dance’s strength is its depiction of a reality that does exist, even though, perhaps and for whatever reason, it cannot persist. 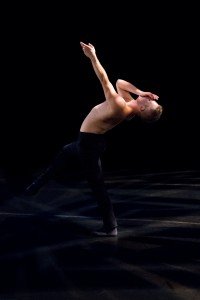 Saudade, which premiered in Toronto last March, treats male/male relationships not as token representations of a “different” relationship from female/male relationships, but as romantic relationships that stand on their own. What makes Saudade as good as it is, aside from the overall choreographic quality and the superb execution by the six dancer cast, is its luminous intensity and physical and emotional intimacy, coupled with its sense of unsympathetic normalcy. These are qualities that appeal to audience members of any background.

It’s also one of those extremely rare dances in which every component works. The accompanying composition, Without Sinking (2009) by Hildur Guondottir (an Icelandic cellist, composer, and singer), sounds like a cross between the doleful sound of a cello and the sleepy, weepy, wave-like sound that emanates from the lower registers of a musical handsaw. It’s an extraordinary piece of music, and Beamish’s choreography, coupled with Mike Inwood’s dim, dusky lighting, fits it like a glove. As one watches, the sense is that the music is creating the choreography, and vice versa. The music and choreography are not merely complementary – one gets the feeling that one could not exist without the other. 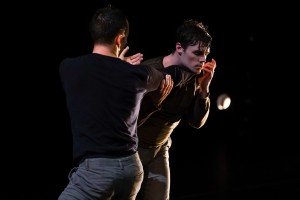 It would be inappropriate, if not counter-productive, to describe the specific relationships in the dance in choreographic detail. Although paired relationships are the cornerstone of the dance, the relationships don’t always begin as pairs – more often than not there’s initial contact within a larger group encounter, and at times there’s a third person involved in what otherwise would have been a pairing that complicates decision-making, as could be the case in any situation. Suffice it to say that the dance flows from scene to scene, encounter to encounter, and relationship to relationship, seamlessly, and each emotional and physical pairing is distinctive. 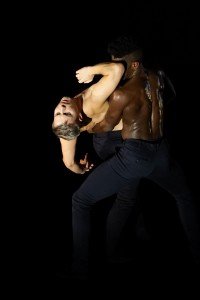 The relationships run the gamut of human emotions, with the overall sense that each relationship is one that never will, or never can, last. There are hesitant efforts to recognize and encourage mutual interest; reluctance and uncertainty to overcome; desires to be communicated and reciprocated; and relationships to be nurtured and fulfilled – in other words, there is nothing unusual about the relationships depicted here besides the sense that they’re under the radar and may not survive, and that the choreography makes each relationship real. Although it’s crystal clear that these are sexual relationships, any overt sexual references are limited and discrete. And although there’s some sexual aggressiveness displayed, it’s muted (no different from similar contact in some heterosexual encounters), and reflects a “style” assigned to a particular character rather than any aggressive violence. Indeed, there’s no violence in Saudade, except the implicit violence done to the human heart when the relationship, for whatever reason, ends. 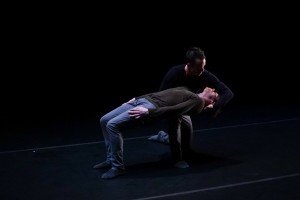 The dancers – Sean Aaron Carmon, Lloyd Knight, David Norsworthy, Dominic Santia, Nicholas Sciscione, and Timothy Stickney – were each flat out brilliant in their assumption (or possibly reflection) of individualized personalities, and in their execution of Beamish’s heartfelt choreography, and each delivered memorable characterizations. Those most indelible to me were by Knight, a Principal with the Martha Graham Dance Company, who was the more aggressive personality – the initiator, the not necessarily unwelcome provocateur; Carmon, who dances with Alvin Ailey American Dance Theater, who was more ingratiating, smoother, seemingly more sincere; Stickney, an Ailey school graduate now a member of Beamish’s company, who exhibited the most vulnerable personality; and Sciscione, a member of Stephen Petronio Company, who was at once emotionally troubled and a tower of emotional strength. Sciscione, a New Jersey native and graduate of the Mason Gross School of the Arts at Rutgers, was the only one of the group that I’d previously seen – a week earlier at a Fall for Dance program. I highlighted his performance then in a subsequent review, and was equally impressed with this one.

I rarely enjoy all male dancing except as a display of group power. Saudade has none of that – at least not physical power. What it does have is much more complex and intellectually rewarding – men displaying emotional power, and it’s a piece that should not be missed the next time it returns to this area.