When I first learned of the title for Joshua Beamish’s new dance, The Masque of the Red Death, I had visions of it being an allegory/satire regarding the current U.S. political climate: red states, blue states, an orange-haired Prince Prospero – that sort of thing.

I was wrong. The Masque of the Red Death, the second program in the Joyce Theater’s Ballet Festival, is, or appears to be, a relatively straightforward adaptation of the classic Edgar Allan Poe horror story translated into a contemporary dance. Unfortunately, it’s perhaps a little too faithful to Poe’s short story and its format as a passive work of literature, and less focused on the story’s theatricality and the transmission of that theatricality through dance. 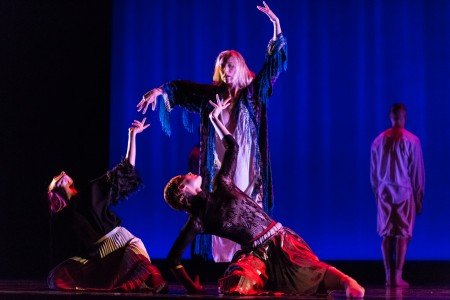 The most serious problem with The Masque of the Red Death is its accompanying score. In UTP, co-composed by Carsten Nicolai (aka Alva Noto) and Ryuichi Sakamoto, the sound is extremely slow-paced electronic music (with piano and string accompaniment) and mostly monotonic, and to me (and from what I could see, many in the fidgety audience) is mercilessly boring to listen to unless one enjoys hearing the amplified sound of a refrigerator hum. I suppose that the sound is supposed to instill a sense of tension, and it does, but it’s also soporific unless one is really into minimalist music. [I don’t claim to be a music expert, so save your emails. UTP is probably an excellent example of the genre.] Ironically, the letters of the title are reportedly derived from the word “utopia,” which is hardly what comes to mind when one thinks of a Poe horror story.

Having seen and been thoroughly impressed by Beamish’s Saudade, which was presented by the Brooklyn Academy of Music last October and for which he selected an obscure (to me) piece of music by an equally obscure Icelandic composer and utilized it to superb effect, I don’t doubt that Beamish had a good reason for his selection here, but this time that reason eludes me. Whatever the reasoning may have been, however, the result is choreography that, as good as parts of it may be, seems trapped within the sound’s ambiance and parameters like a tell-tale heart buried under floorboards or an entombed body within a wine-cellar. A horror story is supposed to be, at least, unsettling if not scary, but, dominated by its musical background, The Masque of the Red Death just moves along to its inevitable and merciful “nevermore” in which “darkness and decay and the Red Death held illimitable dominion over all.” 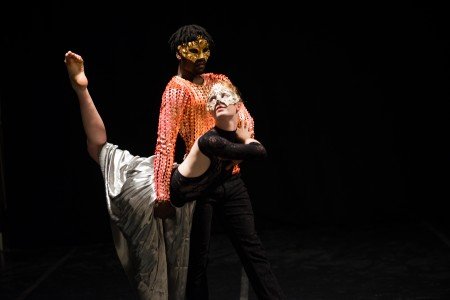 What is supposed to move the piece along is the use of spoken text pumped through the theater’s speakers to, presumably, provide a sense of purpose to the score. But even this served only to confuse things. The texts selected aren’t just from Poe’s story, but are also excerpted from The Secret Lives of Color by Kassia St. Clair, Chromophobia by David Batchelor, and additional unspecified texts credited to Joan Miro, Cennino Cennini, and Wasily Kandinsky. [Cennini was a 14th – 15th Century Italian artist, well-known for his treatise Il libro dell’arte, about the materials and techniques employed by artists in 14th century Italy.] That’s fine, but aside from the obvious preoccupation with color and artists (more about that below), the words, spoken by the estimable Jessye Norman, were, to my ear, virtually indecipherable. This may have been the product of a poor broadcast over the theater’s speakers, but I think it’s more likely that it was simply a poor recording. Or, of course, it might have been intentionally indecipherable. Regardless, instead of moving the action along, it only made the presentation seem more obtuse and ponderous than it really was. 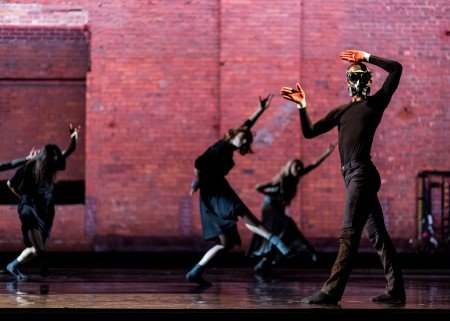 The piece begins sufficiently clearly – depicting death from some pervasive plague as illustrated by what appears to be a “death figure” and dancers in varying degrees of visualized agony, ending when the deceased characters are summarily cleared from public view via a back wall opening that functions as a dumpster. [It’s likely that what I initially saw as this “death figure” is really supposed to be Prince Prospero cleaning up the neighborhood of human trash, since this initial “death figure” is male, wears a gas mask, and may (or may not)have been the same dancer who subsequently portrays Prince Prospero, while later in the piece a “death figure” (the “Red Death” surrogate) is female. Obviously, the fact that there’s uncertainty in my mind about who these characters are reflects what to me is a lack of clarity in the dance. [Of course, Prince Prospero and the Red Death may both be considered, and depicted as, “death figures.”]

And then the story of the egocentric prince who attempts to elude death by sheltering himself and his aristocratic friends in his mansion begins. As in the story, the prince eventually hosts a masquerade ball to entertain his guests that encompasses seven distinctively colored rooms, culminating in a black colored room with blood red overtones, wherein the prince confronts the Red Death surrogate figure, dies, and his guests subsequently die as well. 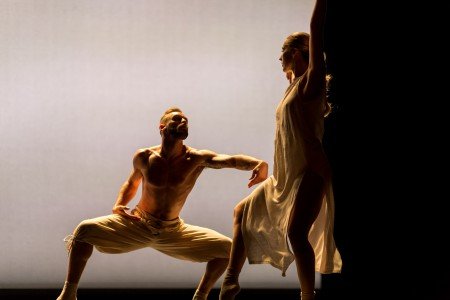 Every time I began to think that maybe there was an intended meaning to choreographic focal points beyond representing scenes in the story  – a difference in the tenor of individual sequences possibly reflecting different temperaments or, maybe, the seven deadly sins; distinctive duets and, perhaps, “choreographed” colors (including repeated vocal references to orange being a male color) that might be transmitting a message of the significance, or lack thereof, of gender differences – the thread, if it ever existed, disappeared, buried within the stylized choreography and the score’s stifling ambiance. And it’s not that the choreography is poorly done – on the contrary, Beamish’s choreography transcends the score (it would not be possible to be bound by sound that lacks rhythm or melody) and there are moments of beauty – but these moments are lost in the dance’s overall relentlessly deliberative pace that UTP and the vocalizations impose.

What concerned me most about The Masque of the Red Death is the knowledge that all this deliberation and lack of clarity was somehow intentional, and I couldn’t figure out why. This is not a dance in which a choreographer has a concept and throws it all together without regard to how it might look to an audience. Beamish is much too respected a choreographer to just throw things together, and it’s obvious – even if nothing else is – that what was presented was assembled with care and purpose, even though part of that intent is that the viewer cares not at all about any of the characters (and isn’t supposed to). And it’s not a matter of overdoing it – it’s of not doing it clearly and interestingly. 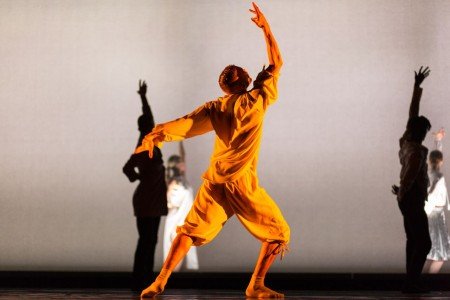 Jarrett Siddall and members of move:the company
in Joshua Beamish’s “The Masque of the Red Death”
Photo by GOTHAMPHOTOGRAPHIA

In that respect, based on what was most successful about The Masque of the Red Death (the use of lighting, supervised by Mike Inwood, to define the different “rooms,” the textures and tones of the colors, and the transitions from them as the dancers “move” from room to room), what the piece may really have been about – or what it at least was tangentially about – was the use and significance of “color.” Obviously from Poe’s story itself (the plague has a color, and the rooms through which the guests and the plague traverse are different colors) and from the additional vocalized excerpts (the titles of the identified texts concern “color,” and the authors of the unidentified additional texts all are visual artists known for their use of “blocks” of color – including colors that reflect varying textures) that “color” is not only a dominant motif of the dance, but also is a significant intellectual component of it. That having been said, other than setting “color” up as having unusual significance, what that significance is is not at all clear.

Elijah Laurant, Chelsea Bonosky, and Jarrett Siddall
in Joshua Beamish’s “The Masque of the Red Death”
Photo by GOTHAMPHOTOGRAPHIA

Although from my vantage point much of the audience greeted the dance’s conclusion with relief, I recognize that a portion of the audience (particularly in the theater’s perimeters) responded with approving hoots and howls. And the move: thecompany dancers (Chelsea Bonosky, Sean Aaron Carmon, Jane Cracovaner, Eric Lobenberg, Elijah Laurant, Belinda McGuire, and Jarrett Siddall) acted and danced with an appropriate sense of unvarying dramatic menace, albeit with no sense of purpose beyond succumbing to the inevitability of death.

So maybe I just missed something. Maybe what was really going on onstage was a masque for something deeper that I was unable to penetrate (as many think was the case with Poe’s short story). And maybe Beamish’s intention was as I had anticipated. After all, the White House has rooms named to match the dominant décor (blue, green, yellow, red), and the color “orange” is therein presently pervasive. Indeed, the dance’s initial post-exterior plague scene, as I recall, is bathed in “white.” Hmmm. Maybe the choreographer’s real intent was just very skillfully camouflaged. I feel better now.

MOVE: the company at The Joyce Ballet Festival