Jump on the DanceWagon is an umbrella organization that provides a platform for emerging choreographers and their companies. I reviewed a J/DW program three years ago, with a different roster of companies, and found a varied assortment, reflecting differences in style, and purpose. The companies that comprised this program, presented at the Ailey Citigroup Theater, included similarly highly diverse groups. 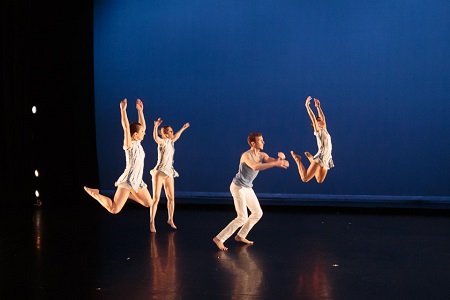 The evening’s most effervescent, and most successful, presentation is the one that closed the program: a suite of four dances with the overall title Rebirth performed by Victory Dance Company.

Founded by Amy Jordan, the company reflects, and celebrates, her struggle and recovery following massive injuries she suffered seven years ago after being hit by a NYC bus while crossing a street. That she survived at all is miraculous. That her survival serves as an inspiration for her dances and dancers is equally so.

I saw Victory Dance Company last year, in a first-year anniversary performance at this same theater. The group was good then, but these dances (with the exception of one that was a repeat from last year) take her and her dancers to another level. Each dance was inspirational, in different ways, but each was entertaining as well. And, not surprisingly, each dance celebrates a spiritual and emotional rebirth.

The most unusual, and to me the most successful of the four dances is the second, Reflection, danced by Christopher Jackson and Randy Castillo. The dance’s title does not only mean a mirror image – although that’s a reasonable takeaway, since the two men dance as mirror images of each other through much of the brief piece. But here the word has a deeper meaning – the inner reflection required to change the course of one’s life.

Jackson and Castillo first appear in hoodies, each visibly angry, and with commensurate attitudes. But instead of letting his anger fester and consume him, one, Jackson, searches himself and becomes better than he was, and he eventually convinces the other to do the same.

The message sounds trite, but the choreography was anything but. Crafting a duet, in this case involving two men, can be a more difficult assignment than moving multiple bodies feverishly across a stage, particularly when the emotions expressed are multi-faceted. Here, Jordan has choreographed movement that reduces the boiling rage of the two dancers down to its essence, comprising a small amount of stage space (the piece has a somewhat claustrophobic air to it), but so filled with stinging movement that you have to feel a measure of sympathy for characters who don’t at first appear to warrant it. And then she gradually changes focus – the choreography softens, the mood brightens, and there’s light, or at least the willingness to search for it, at the end of the tunnel. Jackson (who I recall from last year’s program) and Castillo made the choreography all too real, giving marvelously incendiary performances.

Alive and No Stopping, the first and last of the four sections, are group pieces that celebrate life, being alive, and the power of positive thinking. The first was somewhat confusing – with the inclusion of a red ‘cape’-like prop the purpose of which was unclear (blood? ‘seeing red’?), but it was vividly danced by the six-dancer cast. The final section, which followed the repeat of excerpts from Thru the Looking Glass (I thought I noticed some tinkering with it from last year, but can’t be certain), is a high-energy explosion. The nine dancers excelled, but Aika Takeshima, Kara Zacconi, and Lucile Parrado were particularly impressive.

At the other end of the emotional spectrum was In Your Light, which closed the program’s first act. As vibrant as the Victory Dance Company’s suite of dances are, In Your Light is quiet, meditative, and lusciously lyrical.

I’ve reviewed Six Degrees Dance Company previously, and recognized Artistic Director Cecly Placenti’s choreographic quality, as well as the professional level execution by her and her dancers. (Placenti is a colleague on CriticalDance.) In Your Light impressed the same way, and was particularly refreshing following the dances that preceded it. But ultimately the piece became overwhelmed by too much similar movement quality over too long a period of time – although given Placenti’s inspiration, such a result may have been inevitable.

Placenti choreographed In Your Light to an assortment of music pieces unrelated to each other except by their quiet, contemplative tone, which in turn were applied to a text by Jelaluddin Rumi (known simply as Rumi), a 13th Century Persian teacher and poet. His mystical poetry reflects calm, self-reflective philosophy in the Buddhist tradition, and In Your Light is one of his most well-known verses (“In your light I learn how to love…”).

Placenti’s piece reflects the character of that and other Rumi poems she selected – which were presented in an equally calm, quiet, and contemplative manner throughout the piece in a voiceover by Dawn Jenkin. But it’s a tough road to hoe – as lovely as the poems are, their beauty is not only in their words, but in the meditation they inspire; without it, the words alone can come across as saccharine as a Hallmark card. In Your Light visualizes and illuminates the meditative process, and many of the choreographic passages are Rumi’s poetry in motion. But visualizing it also depersonalizes the impact of the poem and the process, and makes the process itself appear even more measured that it would naturally be. And this effect is increased when each verse is fully explored choreographically and comes to a choreographic resolution, but then another verse is spoken and the process repeats. There are too many false endings.

Placenti does not ignore the need to make the visualization appear as varied as possible. Fleeting interactions, brief romantic duets (one in particular is quite lovely), lifts and tosses, often interrupt the more restrained and lyrical images. More choreographic excitement would have helped – but that would not have been compatible with the subject.

All other pieces on the program were also world premieres.

The evening opened with Burnt Toast, choreographed by Nicholas Grubbs. The cast of six women (if the company has a name, it wasn’t indicated) danced the choreography provided, but the piece as a whole failed to jell. It was non-narrative, but Grubbs nevertheless seemed to be attempting to tell some sort of story (odd girl is cast out and returns; ‘mean girls’ cliquishness). The most memorable images were not of movement, but of the group mugging at various times, each time with no discernable reason.

Far more accessible was Grubbs’s solo, (lack thereof), performed following intermission. The piece begins with Grubbs sitting on a chair, apparently about to play a guitar. Instead, a different man approaches, and Grubbs hands the guitar to him. This man (Philip Vachon) subsequently plays and sings Smokey Robinson’s You Really Got a Hold On Me while Grubbs dances as if his body was being controlled by whatever it was that had a ‘hold’ on him. The agony of being unable to be set free is intensely expressed in the contorted positions Grubbs’s assumes – or is forced by this memory to endure (including, for example, hands figuratively being held behind his back), and by the expression of victimization on his face. 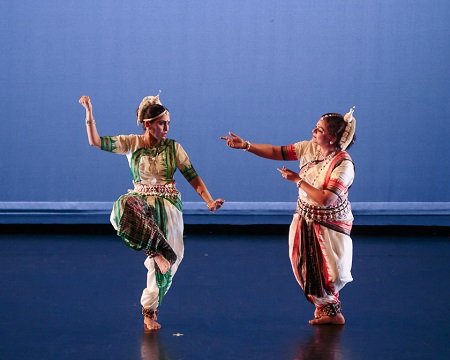 Mala Desai is the Artistic Director of Mala’s School of Odissi Dance, which is dedicated to preserving and promoting Odissi, a classical Indian dance form from Eastern India that is more than 2000 years old. Sanjeevani, which followed Burnt Toast on the program, is an Odissi dance that celebrates dance itself (a program note indicates that Sanjeevani is regarded as a magical herb that can cure all pain and conquer death, and Dance is similarly magical in that it provides a means to remain focused on a chosen path). As the piece began, Desai explained to the audience the meaning of various positions, after which she and Juhi Pant performed the highly stylized dance. Although the dance was interesting, its significance was still relatively opaque. Far more impressive to me were the authentic Odissi costumes – much heavier-looking than those I’ve previously seen in Indian dance, which provided the dance with a sense of nobility and gravitas.

More successful to me was Desai’s second piece on the program, Asha. Performed by Desai and Carlos Fittante, Asha is as ritualistic as Sanjeevani, but it’s also dynamic (the dance was choreographed by Desai, with contributions from Kathryn Posin), with the male character dominant, and clearly illuminating and implicitly guiding the path forward. According to the program note, the male character is representative of Ganeesha (the ‘elephant god’), one of the most revered of Hindu deities. This was a fascinating dance, executed by Fittante with considerable magnetism and command.

Although some of the pieces on this program were more successful than others, overall it was an admirable attempt to present dances not often seen. I look forward to whatever Jump on the DanceWagon comes up with next time.