In Modigliani – the Cursed Artist Thomas Edur grapples with the task of creating a ballet from the life and work of a key 20th C artist. The ground breaking artist was ill-fated, dying penniless from tuberculosis in 1920, whereas his work now sells for millions of dollars. The strongest elements in this performance were the solos and duets. As the artist, Jevgeni Grib brings strong technique and powerful emotion to the tortured solos and Luana Georg, another expressive dancer, plays his loving and severely put upon wife, Jeanne. They portray their first love in a romantic duet, giving way to anger and anguish and tugging at our heart strings. 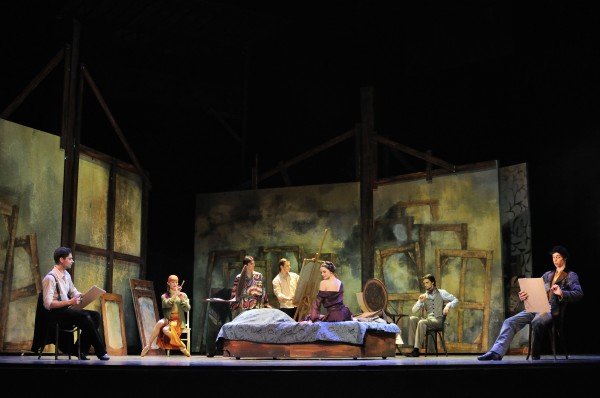 However, there is no disguising the unevenness of Modigliani. The jolly opening street scenes are like a Hollywood view of Paris and the scene depicting the artist’s inspiration features imagined woman in unattractive, “nude” costumes that make it hard to see them as convincing muses. There is also the fundamental problem of Modigliani himself. Edur is true to what we know about the artist, that is he was full of inner fury lashing out at friends, patrons, his own paintings and even his pregnant wife; he is a difficult character to feel much sympathy for even if he does have a fatal disease. However, the final scenes do pack an emotional punch, particularly as the sympathetic figure of the pregnant, widowed Jeanne backs slowly to a window and casts herself adrift from life.

Before the performance of Modigliani, Thomas Edur had organised a tribute to Juta Lehiste, an Estonian ballet principal, on her 75th birthday. Apart from the speeches, we saw film of her in a number of ballets by Mai Murdmaa and others. Lehista had a strong stage presence, bringing passion to a variety of roles. Wish I could have seen her on-stage.


Estonian Opera has tapped into the huge local demand for musicals with a sell-out production of Fiddler on the Roof. This iconic musical tells the story of a Jewish village in Czarist Russia and the family of Tevye and while there is much comedy, serious issues are addressed: coping with change in a traditional community and human rights as the villagers are harassed and forced into exile with only a few days notice. 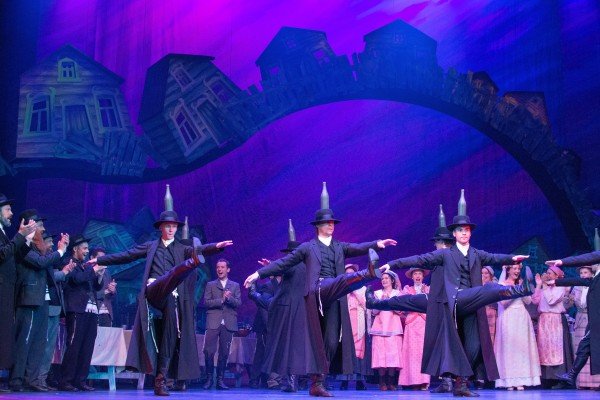 Estonian Opera in “Fiddler on the Roof”
Photo Harri Rospu 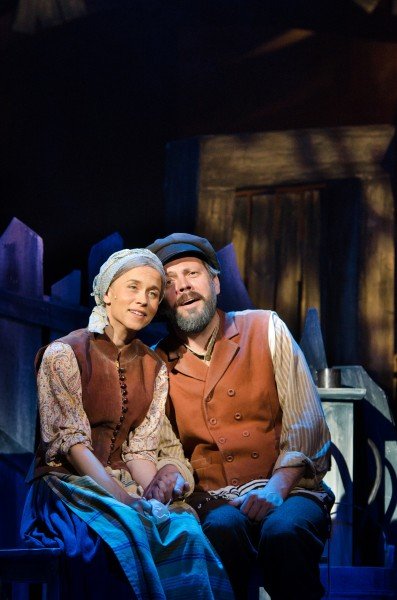 Ellen Cairns designs are a wonder – the village weaves its way across the back of the set in an expressionistic tableaux. George Malvius’ production moves along at a good pace and all the roles are played convincingly. The opera singers are augmented in the lead roles by two drama artists, Mait Malmsten as soft-hearted Tevye and Evelyn Vöigemast as Golde his hard-headed wife. They bring out the humour and despair of the characters and, while their singing is a little out of kilter with the opera voices around them, they deliver their songs with character. Tevye comes to terms quickly with two of his daughters marrying the “wrong” men without his permission, but struggles with his daughter marrying out of the religion, nevertheless eventually giving them his blessing as the villagers are driven from their homes to who knows where.

Malvius emphasises the current relevance of Fiddler to the refugee crisis by ending with Tevye holding the body of a child, echoing the grim sea shore image of the dead Syrian child. For me the enforced exile of this Jewish community reminded me, ironically, of the home destructions, intolerable conditions and ethnic cleansing of many of the Palestinians in Area C of the West Bank, illegally occupied by Israel.


For the second time, Burning Dance provided an opportunity for the artists of the ballet company to make their own dances. This is a terrific idea and the dancers and choreographers clearly relished the opportunity. In all the short works on show, contemporary movement dominated, sometimes a little uneasily with jetés and elegant ballet steps thrown in. However, in Sharps and Flats, Jevgeni Grib achieves a homogeneous contemporary style, describing a young woman obsessed with a pianist. We see her anguish and tension in her opening solo, expressed through awkward arms and balances. The pianist then appears seated at a grand piano and they perform a fascinating duet of agitated longing on one side and polite irritation on the other. Eventually the pianist has had enough and leaves the desolate woman. Marta Navasardyan is outstanding as the woman, fixing our attention on her lost cause, while Evgeni Dokoukine gives fine support as the reluctant pianist. I hope Grib gets more opportunities for choreography.

Given the bright smiles of so much classical ballet, it’s unsurprising the these young choreographers wanted to explore the darker sides of humanity and global issues. An alternative approach was taken by Triinu Leppik-Upkin with La valse a mille temps to a song by Jacques Brel. As the music slowly accelerates, so does Sergei Upkin, spinning his way around the stage as a mechanical doll, adding more complex steps as the pace increases and finally on the floor, still following the music. The lights dim and when they come up the music and Upkin have returned to the beginning – then The End. This was great fun, beautifully executed by Upkin.


The final spot in the second evening of Burning Dance featured a work by Eve Mutso, returning to the home of her first company. Mutso choreographed the 12 minute elEven in 2014, 18 months before she left Scottish Ballet, but it signposts her metamorphosis into a contemporary dancer and choreographer. Her powerful stage presence has previously been employed to great effect by choreographers such as William Forsythe in Artifact Suite and Annabelle Lopez Ochoa created the role of Blanche on Mutso in Streetcar Named Desire and in elEven her extraordinary magnetism remains undiminished.

The title refers to her eleven years at Scottish Ballet and opens with a solo class at the barre. With poise, power and great suppleness, we marvel at her control, rising seemingly effortlessly onto pointe. But in the background there is a soundtrack of joints creaking, breathing and heartbeats, showing the effort and strain necessary to achieve the beauty we too often take for granted. At the end of this section, we see signs of worry, perhaps the thought, “How much longer can I do this?” Eventually Mutso slowly removes her pointe shoes and dances with greater freedom incorporating contemporary steps and floor rolls. She is joined by Daniel Kirspuu, perhaps as an alter ego, symbolising her concerns with the uncertainties of this new direction, until she is finally solo again, more confident in her new role.

On the strength of this performance, Mutso has little need for concern about either her performance standards or her ability to command attention through her choreography. It was also a pleasure to see Kirspuu, often cast in character roles, in a work fully exploiting his abilities.