Kanze Noh, considered by many to be the premiere exponent of the Japanese theatrical art form called “Noh” (Noh means skill, craft or talent), performed several different works from its repertoire during its five day engagement at the 2016 Lincoln Center Festival. I attended the final performance of the run at Jazz at Lincoln Center’s Rose Theater, a wonderful space some three blocks south of Lincoln Center itself. The program included the most ancient of Kanze Noh pieces, Okina, and a newer one (“newer” is relative), Shakkyo.

The Kanze school is one of the oldest of the five major schools of Noh theater, and the one with the most direct lineage to Zeami Motokiyo, who refined the art form into what is now considered Noh in the late 14th century. The school takes its name from the first syllables of the names of Zeami’s father Kan’ami Kiyotsugu (his name is also identified as Kannami Kanze), and of Zeami himself. The current “Grand Master,” the 26th, is Kiyokazu Kanze, a direct descendant of the founding father and son. He and his son Saburota Kanze, 17, the presumptive 27th Grand Master, appeared during this engagement.

Although I have little more than a passing knowledge of Noh theater, I decided to attend a performance not just out of cultural curiosity, but because I anticipated that notwithstanding obvious and significant differences between them, Noh and ballet might have much in common. 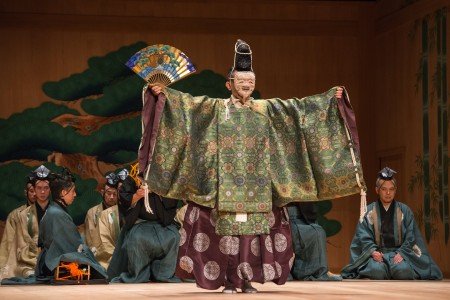 Based on my observations, they do…and they don’t. The common elements are its religious (or quasi-religious) origins and subject matter, the periods of its historical development (which may be coincidental – keeping in mind, however, that nothing is coincidental), official sanction, required forms of movement, and rigorous discipline. And the “spirit” of the movement, if you will, the visualization of what it intends to transmit to the viewer, is remarkably similar to pictorial depictions of ballet’s origins (particularly with respect to Okina), and to movement intended to capture and enhance non-human behavior (with respect to Shakkyo).

To say that Noh has been around a long time is only slightly less an understatement than saying that humans have been around a long time. According to the written introductory remarks by Kiyokazu Kanze, Okina, the oldest Noh play in Kanze Noh’s repertoire, “contains elements dating back more than 1500 years, which can be traced in part to the to the time of the Silk Road, when West was first connected to East.” Whether the West had any influence on Noh’s antecedents is conjecture – but it is generally acknowledged that merchants and traders carried cultural baggage with them. 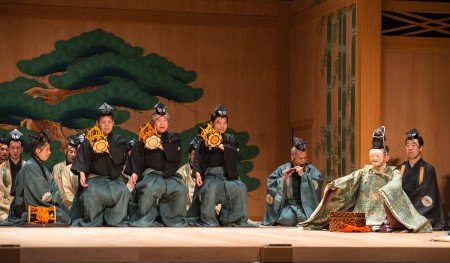 Be that as it may, both Noh and ballet initially evolved as a protected form of performing art largely, if not exclusively, patronized by the governing nobility/warrior class. Noh developed originally though cross-pollination with other Asian theatrical/dance forms (primarily Chinese) in or around the 8th century, and was refined into the art form as it now appears in the 14th-15th centuries after the ruling shogunate (and subsequent rulers) gave it patronage and protection. Of course, this was very close to the time that balletti in Renaissance Italy began to flourish with the support (and for the benefit) of the ruling aristocracy, eventually spreading via Catherine de’ Medici to France in the 16th century, ultimately to manifest as court dances and mythological-themed spectacles glorifying the Sun King, Louis XIV.

Like ballet in its infancy, Noh is a relatively inelastic form of theater/dance, with fixed prerequisite movements. But while ballet largely outgrew its courtly rigidity and religious or quasi-religious ceremony, Noh as an art form rarified it, and directed its emotional impact inward (while recognizing that an audience is there and obtaining the benefit of the performance). It is highly stylized and minimalistic storytelling, most often featuring slow and deliberate movement with no attempt at verisimilitude or to tell a story as a Western viewer might anticipate. And perhaps most difficult for a Western viewer, there are agonizingly long periods of no movement at all by everyone on stage but a single actor. [Corps ballerinas who stand in a fixed position on the stage perimeter as the main action proceeds within their boundary have nothing on the Noh performers, who must maintain positions without moving a muscle for significant periods of time (e.g., at least 10-15 minutes).] 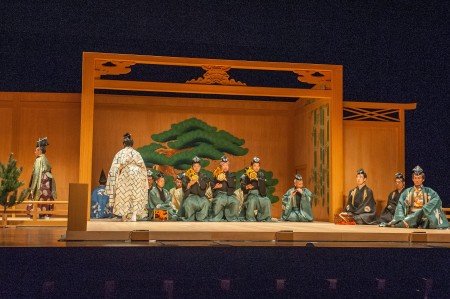 In addition to the stylization and ultra-controlled movement are the masks and costumes which dominate the presentation and are an integral part of the action, as well as “orchestral” accompaniment – drums (shoulder and large hand drums), a flute, and vocalization of words and sounds that have cultural and/or historical significance. And unlike, say, Balanchine, who also distilled movement and the emotion of a story to its essence but maintained its theatricality and the audience’s emotional involvement with the story, Noh makes no attempt in the Western sense to involve the audience. But “audience involvement” may be culturally-based – a young Japanese woman seated next to me, and other Japanese I noticed in the audience, watched the performances from the edges of their seats, thoroughly enraptured and responding to significant developments and stimuli on stage that were unrecognizable to me. 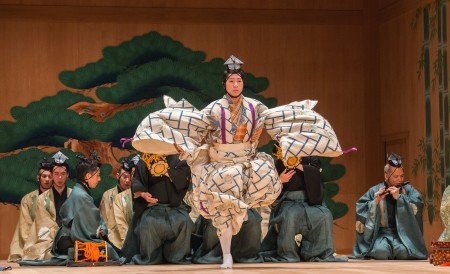 All this makes Noh appear to be very different from ballet, and it is. But there are remarkable similarities between Noh and early ballet beyond concurrent historical reference points and being the embodiment of an upper crust sense of refinement and class. The clearest example is Okina.

Okina is an ancient religious ritual transformed into Noh theater which involves a significant measure of worshipful mysticism and costuming that glorifies the characters. It begins (as apparently do most of the Noh plays) with the actors and musicians entering via a pathway stage right, separated from the offstage dressing area by a multi-colored curtain which is raised as the players enter or exit the stage. [The stage set is essentially identical to Noh stage sets wherever Noh is performed, except here there was no typical “pagoda”-style roof over the stage.] The initial processional has a mask-bearer (the mask is the face of an old man) followed by the actor who is to wear the mask, followed by others. They assemble in their prescribed places on the stage, and after the lead actor, Kiyokazu Kanze, bows ceremonially to the mask bearer and the corners of the stage (an advance reverence) and positions himself in front of the mask bearer and the ceremonial box containing the sacred mask (apparently the elderly man and the deity are essentially synonymous), the drums beat and he then begins to chant. His ‘outrunner’, Senzai (Saburota Kanze), dances a somewhat more vigorous dance in a somewhat larger space – what I took to be a call to others to observe, to witness, and to be blessed by, the strange and fantastic ritual about to be presented – not unlike similar incantations in other religious and cultural ritual storytelling. As this happens, the mask is placed ceremonially on the lead actor’s head by the mask bearer (the only time in Noh where the mask is placed on the lead actor’s face in full view of the audience) and the lead actor becomes inhabited by the deity of whom the mask is symbolic. 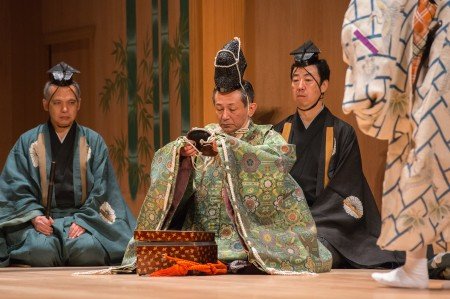 Okina (the lead actor takes the name of the deity) then dances center stage in slow, ritualistic fashion punctuated with occasional foot-stomping, and displays himself in his finest regalia – the display being a part of the dance – with the elaborate costume placed deliberately over his body and outstretched arms. While the intention may be considered respectful and honorable in one context, and vain in another, the images of the actors in Okina – particularly the lead actor once he dons the mask and becomes a deity, are remarkably similar to images I’ve seen (contemporary artistic renderings, or reconstructions such as the Birmingham Royal Ballet’s The King Dances) of Louis XIV showing himself and his finery off as evidence of his wealth, power, and godliness. As Louis XIV apparently wore extraordinary garments displayed like draperies around his body and outstretched arms (from which the typical ballet ‘regality’ pose is derived), so Kiyokazu Kanze displays his regal refinery, his elegantly brocaded (though considerably less ornate) costumes, for all to see and be impressed by. And except for the foot stomping (and possibly the Sun King engaged in a bit of that show of power as well), the movement images are also similar – with the personification of the deity in Okina presenting himself in a controlled circular display as if moving on a central axis, and the movement of Louis XIV himself within a similarly restricted radius and with limited movement variety. 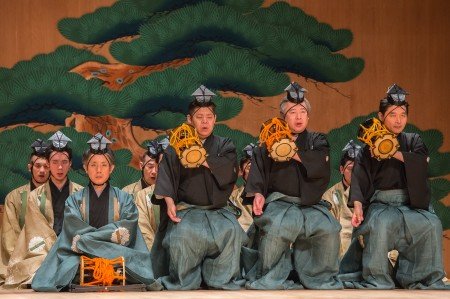 What follows is more telling to me – and also shows a connection to other types of dance. Okina’s dance is succeeded by that of Sambaso – a character identified as “Kyogen”. Usually the ‘comic’ form of Noh, called Kyogen, is presented separately as a sort of intermezzo. But Okina incorporates Kyogen into the play. It’s not comic, but Sambaso’s dance is far more dramatic and physically extravagant (though still tightly controlled) than that of Okina or Senzai. Sambaso, performed by Yasutaro Yamamoto, encapsulates what to me Okina, the Noh play, is all about – he prays, or dances, for a good harvest. As controlled as it is, it looks quite a bit like other cultural dances (including what are known as “rain dances”) that pray and call upon the deity’s blessing for a good harvest.

Shakkyo (The Stone Bridge) exemplifies a type of Noh play that relates a pilgrim’s visit to a religious site and the remarkable events he sees. The pilgrim, a priest, comes to a stone bridge, and waits. Then he sees materialize before him a vigorous and dramatic dance, performed by a White Lion (Kimitake Ueda) and three Red Lions (Kojiro Sumi, Yoshinari Shimizu, and Takanobu Sakaguchi). The Lions are Noh actors wearing fierce lion masks – and although still tightly controlled, these dances are nothing like the more physically restricted dances in Okina. These are wild animals, or representations of them, guardians of the sacred land – the Pure Land, over the stone bridge – who move much more expressively (but still directed inward). They not only look like wild animals (by their masks and demeanor), they move like them. I was particularly impressed by their head movements – their ‘faces’ moved like lions’ heads would – in measured directional increments, slowly absorbing everything around them with a glance. These were remarkable performances. As I watched, I thought of the accuracy and refinement of the faun movement in L’Apres-midi d’Un Faune, but the animal representations correspond to any number of depictions of animal movement in contemporary dance. 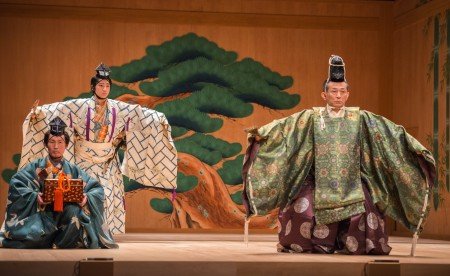 I’ll admit that the connection between Noh and ballet is somewhat tenuous – the connections I see are obvious, but there are connections between many performing art forms if one chooses to make them. Regardless, Noh stands on its own as an ancient but still vital form of Japanese dance theater. And although I am hardly an expert at evaluating Noh performances, based on the audience response at the program I attended, which gave the performers a sustained standing ovation, the renderings were top notch.