There are times when words are inadequate to describe what one has seen. That’s often, if not always, true when it comes describing dance. Encapsulating a dance viewing experience is an incredible challenge. The performance of two powerhouses Maida Rust Withers and Kei Takei defies words. But as I’m limited to words here, I’ll just have it give it my best effort.

I don’t have room in this review to cover the history of these two daring, cutting edge artists. Withers is 81 years old, and Takei is a decade younger (according to the internet). If you’re not familiar with their lifetime of work, I encourage you to seek out more information. Doesn’t every dancer dream of a career that continues to thrive past age 40, age 50, age 60 and beyond? These women have accomplished much, but it’s perhaps most striking that they’re still creating remarkable dances and are actively dancing themselves.

Withers performed DIGG, which the program explained “explores a timeline of political uncertainties and entanglements with reverberations in time and place until tomorrow, hopefully, when we may stand together as humans on the edge of normalcy.” Although I can’t completely summarize Withers’ background, she’s served as a dance professor at the George Washington University (GWU) since 1964 and has created over 100 dances for  the Maida Withers Dance Construction Company, which she founded in 1974, on stage, site, and film. Among other things, Withers is known for for works that combine experimentation, collaboration, improvisation, video, and social and political commentary. She’s also been at the forefront of integrating dance and interactive technologies. Withers has toured internationally and has engaged in projects in over 20 countries, including Russia and Brazil. Without question, Withers is a dance legend. 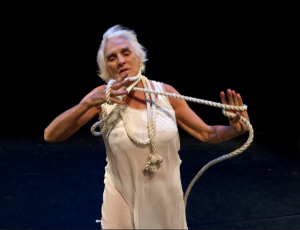 To those familiar with Withers’ work, DIGG probably didn’t have much shock value, but to anyone unfamiliar with her, I can imagine they may have been surprised. She begins by vigorously wriggling in a straightjacket, with two figures in all black on either side (GWU senior dance majors Kristen Lamb and Linda Ryan). Withers ping pongs between them, and even when the straightjacket is undone at the back, she whips about as the shadowy pair grip the sleeves. Once freed, wearing a thin white slip-like garment, she moves to a square of light on the floor on which waves undulate. Waves appear on a large screen behind her, and on a pair of smaller screens across the stage, too.

Two vocalists (Audrey Chen and Phil Minton), who sit on bar stools facing the stage, make sounds of wind. Withers moves with assurance, arms flailing, fingers flickering. Images on the screen behind her change — a close-up of a man’s bare back leaning forward in a narrow boat, a steep outdoor staircase. Video footage includes scenes of the first Soviet-era Gulag shot by Linda Lewett during a 2004 visit by Maida Withers Dance Construction Company to Russia. The vocals change as well, going from breezes to frog-like croaks to distant screams and even the whirring of a helicopter. The vocal score is impressive and eerie and sometimes exhausting.

Withers clings to a bench, then fearlessly topples backward off of it. Later, she uses the bench while lacing up combat boots. She’s agile, and her knees still can lift to her chest. In second position, her thighs shudder back and forth, her hands clapping in between. Withers drags rocks tied up with rope. The rope encircles her neck, her face. She becomes a ghost of woman sentenced to 8 years of hard labor. She picks up smaller stones in a washtub, and they become soap. 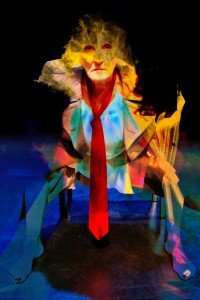 Like Jacob Marley, chains come out. Then Withers dons a military coat and a blood red tie, which she twists and contorts. Putin and Trump and a dunce cap appear on the large screen. The red tie may be fashioned like a noose but Withers will not be silenced. To the contrary, she begins a clever impassioned monologue. “React,” she says strongly, followed by “reactivate,” “realize,” and a spout of other words beginning with “re” (rebut, rebuke, rebrand, recuse, recant, recall, redo, redact, retweet, revolt, redundant — she humorously says redundant more than once — and the list goes on). At some point, she falls into sobs that resolve into laughter. Eventually a white bird of soars across the screen, and Withers sweeps a handful of branches around. There’s a sunset, shimmering water, and hope. Withers indeed appeals to us all to strive for peace, to protect the earth and humanity.

Takei is a legend, too, in the United States, in Japan, and around the world. Her Moving Earth dance company has performed in 60 U.S. cities and 17 countries. Growing up, Takei studied dance and drama and completed an apprenticeship with dance master Kenji Hinoki. In 1967, she came to this country on a Fulbright Scholarship to study at the Juilliard School. In 1969, Takei began creating the epic LIGHT, which presently has 47 interlinked parts, ranging from solos to large group dances, that have been described collectively as a “spiritual diary.”

Takei and Withers have more in common than their age and their slightly wild thinning hair. Among others, they were both inspired by Anna Halprin. Although their individual styles are widely divergent, one senses a deep commonality in their enduring devotion to expression through dance and in their desire to widely share their shared passion for this art form. They’re certainly both visionaries.

Takei’s two solos from LIGHT ignited my imagination despite their quiet simplicity. In contrast to DIGG, which overflows with ideas, Takei’s solos follow a less outwardly complex approach. In LIGHT, Part 28 (The Rice Washer), from 2005, the stage is bare except for a circle of light. The only prop is a small square wooden stool. Takei’s costume is made of wrapped pale fabric and long shorts. She bends forward seated on the stool, her legs spread apart, and swirls an arm repeatedly in front of her. You sense water as her hand dips and gently swooshes. A shoulder raises, a foot swings, and a soothing rhythm develops. I was reminded of a conductor. The ritual of washing rice is transformed into something completely mesmerizing.

In LIGHT, Part 47 (run), created in 2017, Takei wears a similar pale fabric, but with wide-legged pants. Her shoulders swing back, then her arms freeze in mid-air like a speed skater. There’s an underlying drum beat. Takei moves slowly, engagingly, and it feels cosmic and eternal. In a deep plié,  a wide martial arts-like stance with her legs firmly planted, her upper body goes up and down and tilts forward, arms swinging. She’s a facile mover. With her chin tucked into her chest, her exhalations undisguised, you feel she’s aggressively dashing despite the fact that her legs are still. Takei’s fight and determination are evident, and the way her limbs are weighted yet free is nothing short of fascinating. So enrapt was I that I hardly noticed she had gradually crept to the front of the stage.

I left the theater with so many thoughts, but primarily I was impressed by the tenacity I observed. Seeing Withers and Takei perform together, I became a small part of their unfolding stories. I’m so thankful for their gifts and am glad their creatives lives continue to gain ground.