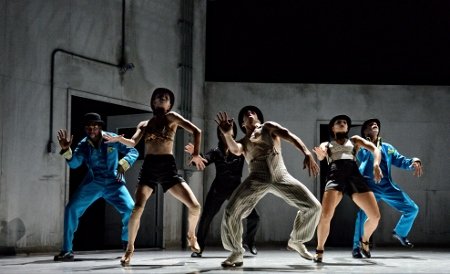 To the accompaniment of faint, mournful bells, we see a seated man, crumpled in the corner of a bare, harshly lit, institutional room. The stage setting is flanked by double doors topped with two windows like looming eyes. We are in some kind of hospital, a suggestion of a man sequestered in rehab. Heavy, snaky electric cables are hanging from the ceiling and are plugged into utility boxes. The mournful man in the corner (Betroffenheit co-creator Jonathon Young) begins a conversation with disembodied voices which correspond to flashing lights from various parts of his cell like room. He keeps mentioning “the accident,” says “it’s collapsing,” that he’s trying to “rescue them.” He is in a state of shock which has left him in a kind of suspended animation. The demons of grief and addiction then develop into a “show within a show.”

This variety show has a wild cast of dancers/characters including sexy nightclub salsa dancers (Cindy Salgado and Bryan Arias), a crew of aggressive tap dancers (led by David Raymond) and a sinewy mime (Tiffany Tregarthen) wearing an old-fashioned sequined bikini with a tiny, clownish hat perched precariously atop her head. In a welcome bit of comic relief, Young appears as the host of this variety show, garbed in a garish blue leisure suit. Playing Young’s alter ego or “id,” the mercurial and magnificent Jermaine Spivey performs with intensity, humor and pathos. The plot is conveyed by Young speaking, the dancers lip-syncing and bits of rare dialogue. The manifestation of this torturous internal odyssey is played out through the intense physicality of the dancers of Crystal Pite’s company, Kidd Pivot.

Electric Company Theater’s Artistic Director Young and Kidd Pivot founder and internationally renowned Canadian choreographer Crystal Pite collaborated in this unique blend of theatre and dance – Betroffenheit. A German word, it has no literal translation, but suggests trauma and loss. Although there is a script, the piece is not theater in a traditional sense, but veers closer to the style of tanztheater.The skeleton of a plot revolves around the main character played by Young, who has suffered a catastrophic loss, and his strategies to overcome PTSD, his attempts to distract, cope and ultimately heal himself. The story arose from a personal tragedy from Young’s own life. In 2009, his ten-year old daughter and two cousins perished in a burning cabin in rural British Columbia. Young, staying in a nearby lodge, tried but failed to rescue them.  Devastating and mind-numbing loss morphed into theatre. As written by Pite in the program notes, the work evolved “to use our art form to grapple with the question of suffering.” 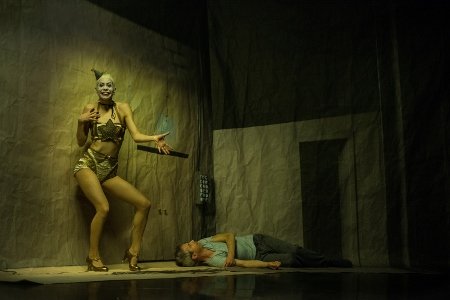 The piece’s second half sheds the variety show theme and verbal bantering of Act I, and we enter a territory of fearless and transcendent physicality. The dancers have traded their garish feathers, sequins and leisure suits, for somber, faded blue and gray shirts and sweatpants.  Small, quick gestures of grief and comfort whiplash into astonishingly quick changes of level. Spiraling leaps land into cat-like sprawls. A beautifully intense duet for Tregarthen and Salgado alternates delicate gestures of grieving and comfort with grand full-bodied movement. The Kidd Pivot dancers are exceptional in their range of skill,(how many dancers are equally skilled in tap, mime, modern, contact improv and salsa?) commitment and raw physical courage. It is amazing to see the sheer energy and passion these five dancers bring to the stage. Young, the co-creator, playwright and protagonist of the piece, though not a trained dancer, fits in seamlessly to the action.

Betroffenheit finishes with all the roiling, breakneck dancing abruptly halting. We hear a bird chirping in the silence, and a disembodied voice says “you’re healed.” In Spivey’s final solo, he repeatedly bends over and does a cranking movement next to his knees, and then his hip joints, like a broken toy trying to fix itself, or a broken human, trying to make his way through just one more day.

The audience gave a roaring, standing ovation, with some in cathartic tears. In an interview on Canadian television, Pite said they hoped to convey human’s desperate need to connect with each other, and a desire to make “the personal, universal.” With Betroffenheit, she, Young and the dancers have succeeded triumphantly. We walked out into the cool, spring night, humbled and amazed.