Given the relative youth of many of the collaborators, and what I assume was a pretty small budget, it wasn’t surprising that in many ways “Kitchen Sink Fest” came across a little like a high school talent show. I wish I could give it an “A” for effort, but overall, I would give it a C+. There were, however, some individual performances that deserved a top grade (and a few, unnamed, that didn’t earn passing marks).

Ben Levine, Dance Place’s very talented Theater and Technical Director, served as the producing director and set designer for Kitchen Sink Fest. For a unifying theme, dodecahedra were used — that’s right, those twelve-sided shapes that may or may not have something to do with Laban. Other than serving as a common element in many of the works (there were giant dodecahedra on top of which dancers danced, smaller dodecahedra that dancers caught as they fell from above, costumes featuring the shape, etc.), why this shape was used is a mystery to me. I don’t mind mysteries, but I think I would’ve preferred less of the dodecahedra. I honestly got tired of seeing them everywhere. And, they weren’t necessary. Since the name of the festival was “Kitchen Sink Fest,” a kitchen sink approach, with no unifying theme, might have suited it better.

The name of this festival and the concept of a series of one-minute pieces piqued my interest. It didn’t quite live up to its billing as “fast-paced,” though. In fact, the uneven pace was the biggest flaw of this “mega-collaborative movement-based performance project with theater technology and design at its core.” If the one-minute pieces had followed rapidly, one after another, that certainly would’ve improved the experience. It seemed to defeat the purpose of presenting one-minute works when the transitions between the works frequently, and awkwardly, lasted far longer than the works themselves. 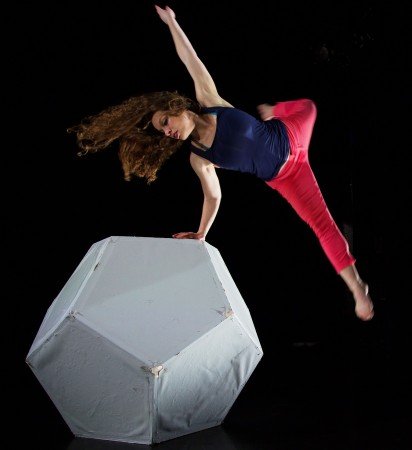 Also, although the program promised to deliver choreography from “22 of DC’s most daring dance makers,” in reality, a lot of the dancing wasn’t particularly daring, and the choreographers all seemed to come from the world of contemporary dance. Many choreographers contributed more than one one-minute work, and there were 43 works total (a few pieces were inexplicably cut from the program). It’s hard, perhaps, to be at your most daring when you’re given only one minute for a performance. On the other hand, being given only one minute per piece ought to have encouraged daringness. Too many of the choreographers, rather than embracing the opportunity to be really bold, offered fairly unoriginal fare. Therefore, the truly daring stood out.

Among the daring were two works choreographed by darlingdance, Dodec-A and Crispy Thigh Bucket. According to my internet research, darlingdance was founded in DC in 2010 by choreographer Hayley Cutler. The program did not identify the names of the dancers in each piece, but it appears that Cutler herself danced in both. She and Holly Bass, whose website identifies her as a “multidisciplinary performance and visual artist,” were easily the two most provocative and fascinating performers to watch. They each have an electric stage presence and the ability to make you smile, or cringe, or some combination thereof.

As it turns out, neither of Cutler’s two pieces, nor the two by Bass, Nice and Quiet and Last Dance, involved much dancing. They were more performance art/theater pieces. These ladies knew what to do with one minute. In Dodec-A Cutler used nudity and humor, a great way to get the audience’s attention if you only have a minute. A large dodecahedron was placed over her naked torso, like she was wearing a barrel. She announced, among other things, that she would perform an excerpt from Yvonne Rainer’s Trio A, and she did, wearing the unwieldy shape. In Crispy Thigh Bucket, she and a female partner stood side by side shaking their not ballet-dancer thin thighs together, white dresses pulled up over their heads. The dresses subsequently became a screen onto which footage of a scene showing eggs was shown — preparation for frying chicken? Cutler earned an “A” for entertainment and bold presentation. 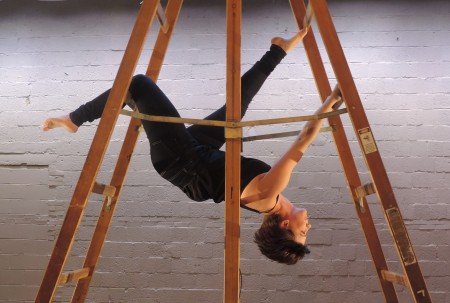 Bass earned an “A,” too, for her two enjoyable works. In Nice and Quiet, in a party frock with a handful of flowers, she approached a punching bag like a potential mate, flashing a flirtatious smile.  Suddenly and shockingly, however, she took out a knife and sliced the bag. Brightly colored stones or candies (I couldn’t quite tell what they were) crashed to the floor like remnants of a burst pinata, and she collapsed as well, the knife brought to her heart. In Last Dance, Bass wore a glittery silver gown and sung the Diana Ross tune of the same name. No dodecahedron emerged in this piece. Instead, there was an enormous disco ball around which she and a few dancers posed, getting the disco atmosphere just right.

For dancing of the more traditional sort, Adrienne Clancy and ClancyWorks Dance Company dancers’ excerpt from On Taking Steps to Climbing Mountains, from 2008, earned an “A,” but it obviously wasn’t a work created for the festival. It did, however, whet my appetite to see the entire piece. The male and female dancers, each with a small ladder, manipulated and moved among their props with perfection.

The real stars of Kitchen Sink Fest, in my opinion, were the lighting designs, some of which were not only daring, but truly innovative. Levine explains in program notes that Kitchen Sink Fest featured “some dances without dancers where the design elements perform without the support of bodies.” I can see how that could be a lighting designer’s dream, and in Kitchen Sink Fest, it was a well realized dream. Not only could I have done without all the dodecahedra, I probably could have done without the dancers. So, another “A” goes to Levine and his tech team (Sarah Chapin and Annie Choudhury).  Yoga Goddess 4D (concept by Levine, original artwork by Meredith Osterman) completely mesmerized me. A seated Buddha-like figure was surrounded by beautifully colored flowers blossoming across the stage. In Gold (concept by Levine), a camera focused on a goldfish swimming in a bowl, and the close-up movement of the fish (the fish went uncredited) was projected onto the white curtain behind it.

The final “A” of the evening went to some of the ten installations around the theater, which the audience was encouraged to explore during a 35-minute intermission. The process of being herded through the installations was challenging. Some of the spaces were narrow, and very crowded. Stairwells were jammed with people as well as art. It felt a little like being led through a haunted house run by children.  And yet it was fun and sometimes enlightening, and I wish I had lingered longer. One fellow patron described the night as “tapas” and “off off Kennedy Center,” and this description was apt.  It will be interesting to see if this festival repeats next year, and if so, how it grows.