I was given a choice as I entered the theater to see Kyle Abraham/Abraham.In.Motion’s Dearest Home — take a set of earbuds or commit to watching the performance sans music. The warning was repeated before the performance started. Audience members were cautioned to stick with a single choice, music or no music, because switching between the two would lead to a “disjointed” experience. Despite the warnings, I tried a little of both. Quickly, though, I realized that I preferred watching the dancing without music, and so that’s how I took in most of the performance.

I really loved the experience of watching a concert-length dance work without music. In fact, I enjoyed it so much, I wish I could turn off the music for other dance performances, too! There’s something very different, in a good way, about seeing dance stripped of musical accompaniment. It’s untrue that there’s no sound, I discovered. In the intimate theater, the square stage, covered in white marley, sat surrounded by four sides of seating. Without music, I heard breathing, the rustling of costumes, the beautiful squeaks and slides of feet across the floor. And I heard programs accidentally drop, a packet of tissues being fished from a purse, and most notably, I heard, perfectly clearly and uncomfortably, the sobs of a dancer (Matthew Baker) that would’ve been muffled by music. Without music dictating my feelings or serving as a distraction, I connected more personally to the work, and this heightened my appreciation of the dancing. Without music, I became hyper-focused on the movement, and that experience was wondrous. 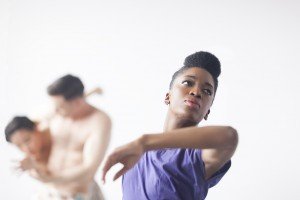 Wondrous, too, was the organic nature of the dancing as it unfolded in primarily solos and duets. Program notes indicate that Dearest Home deals with love, loss, and longing, and the ability of these emotions to heal and bring people together. These themes indeed came through in the choreography, which captured the heart’s ups and downs. The six performers (Baker, Kayla Farrish, Tamisha Guy, Catherine Ellis Kirk, Marcella Lewis, and Jeremy “Jae” Neal) showed an incredible range of emotion. They’re accomplished storytellers with their bodies. Although I can’t claim to have understood the exact contours of the stories (this was quite likely by design), I had no trouble at all feeling the depth of the love and hurt conveyed.

Dancers kept coming and going, casually walking into the central space and exiting. The costumes by Abraham consist of simple street clothes, including some Hawaiian style print shirts for the men, plus undergarments. In carefully crafted choreography, dancers tucked and untucked tops into and out of bottoms, first rather nervously, then more eagerly. Another movement in common was trembling fingers. Dancers eventually shed clothing, further baring their emotions. As I wasn’t listening to any music, the lighting by Dan Scully became a sort of score. The lighting changes signaled alterations in the groupings of dancers and in the feelings being expressed. 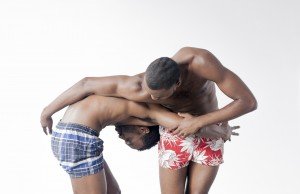 Dearest Home was easy to relate to because at its core it’s about relationships, and we all have those in one form or another. Against only silence, the dancing spoke loudly. I felt like I was eavesdropping, despite the lack of words. There was a lot to contemplate. I observed couples fighting, flirting, negotiating, tenderly coming together, and angrily or hesitatingly separating then clinging to each other over and over again. I sensed overlapping feelings, complex emotions that were shared, but other moments of extreme, devastating isolation. A pair of dancers slightly lifted their arms out straight from their sides and flapped, like birds tentatively preparing for flight. Baker threw his arms around his bare chest and bent into himself, heaving in grief. A trio wrapped tightly together shared weight and held the back of a dancer’s head in a coordinated baptismal dip.

I cannot name any of the dancers as standouts because they’re all great. Yet, if pressed, I think I’d have to single out Catherine Ellis Kirk and Marcella Lewis as particularly gripping. Maybe that’s because I saw them so up-close, in touching distance from my front row seat? At any rate, I remained enrapt throughout Dearest Home. When it was over, I still wanted more. That’s the mark of a strong performance. If given the opportunity to see Dearest Home again, I’d continue to choose to watch it without music, and I’d encourage others to do the same.

A.I.M: Dances At a Different Gathering