May 4, 2022
Program A: Kinaesonata, Adagio in B Minor, 5 Live Calibrations, Night Bloom

L.A. Dance Project returned to the Joyce Theater last week for a two-week run. I saw the first of the two programs presented.

Overall, and based on the program I saw, LADP is clearly a company worth seeing now and to keep an eye on in the future. Although I was less impressed by some of the choreography than I’ve been for other contemporary dance companies, there’s no question that the pieces presented are competently done and reasonably enjoyable to watch. That’s an improvement over the last two LADP visits I saw, perhaps due to a broader choreographic view from its artistic director, but also, perhaps, because in this program only dances by female choreographers were presented. 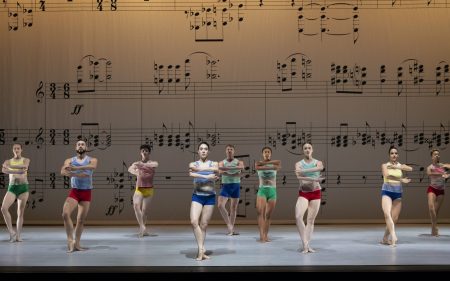 LADP was co-founded in 2012 by Benjamin Millepied, a former NYCB Principal Dancer. Except for a brief stint as Artistic Director of Paris Opera Ballet, he’s been LAPD’s Artistic Director since then. The company, presently consisting of sixteen dancers, claims “to expand the boundaries of dance as an art form and redefines how we interact and relate with movement in the modern world.” I suppose that means it won’t be doing Swan Lake anytime soon. Seriously, though, such lofty self-praise, though a worthy goal, is no different from what many other contemporary dance companies claim to attempt to do. The reality, as measured by this program (and with one exception), is far less pretentious, and considerably more realistic.

For example, the program opened with a dance that took LADP’s audience backward, to a piece that really did, in its time, expand the boundaries of dance.

Bella Lewitzky, who was born to Russian / Jewish immigrants in 1916 in a utopian colony in California (Llano del Rio), was a contemporary dance pioneer on multiple levels:  as a dancer, a female choreographer, a multi-faceted activist, and as the founder of her own company, Bella Lewitsky Dance Company, in 1966. Her life history is fascinating to read, and far too complex to restate in any reasonable detail here. Suffice it to say that through her long career, among a host of other accomplishments, she was a student and protégé of Lester Horton, headed college-level dance departments, battled the House Un-American Activities Committee and the National Endowment for the Arts, earned six honorary doctorates and won numerous awards, led her company to acclaimed performances in forty-three states across the U.S. as well as twenty countries on five continents, was a wife and mother, and created some 50 noteworthy dances, including Kinaesonata (1970), in which her daughter danced at the premiere performance.

Kinaesonata opened the LADP program, which by far was the evening’s finest dance. Restaged by Walter Kennedy, one of only three people authorized to stage Lewitzky’s dances, and set to Argentine composer Alberto Ginastera’s “Piano Concerto No. 1, Op. 22,” the dance is noteworthy not only for what it has, but also for what it doesn’t have. I admit to being unfamiliar with Lewitzky’s oeuvre, but its quality of motion shows little in the way of indebtedness to modern dance in New York at that time. That is, although the movement is somewhat limited in scope, it’s by no means dominated by orthodox canons of movement minimalism. This dance soars. 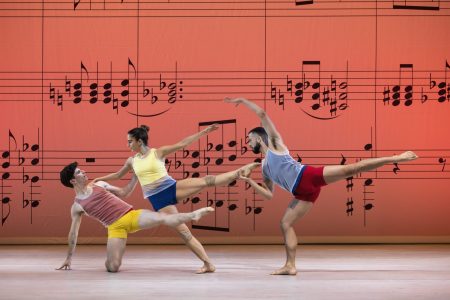 For this staging, my understanding is that Millepied arranged for a new set by Charles Gaines, as opposed to the simple unicolor background and unitard costumes (which can be seen in videos) in the original. Gaines is credited with the lighting design (with Francois-Pierre Couture), the set design, and the costume design. The new set makes the dance pop even more than it already did, with musical notes (from Ginastera’s composition) spread across the upstage rear backdrop, and colorful costumes that put additional life into Lewitzky’s enlivening of the score.

Like Ginastera’s score, in Kinaesonata (obviously a mashup of “kinetic” and “sonata”) the dancers are in constant motion from beginning to end, with maybe a couple of seconds, total, of posing in place. However, the allegro movement is not just fast, it’s intricate: it includes synchronized movement that quickly morphs into mirrored movement that quickly morphs into something else; lifts; acrobatic-like positions – including stair-stepping on another’s body; skillfully placed repetitions (though nothing that would indicate a theme); and a clear beginning and an equally clear (and clever) end. It’s alive, and the nine-dancer cast delivered a superb performance. Watching it is the visual equivalent of eating popcorn while watching a movie in a theater (yes, that used to be a thing) – it’s comfortingly addictive, even with ersatz butter squeezed over it (yes, that used to be a thing too), and you can’t stop gorging until there’s no more left. 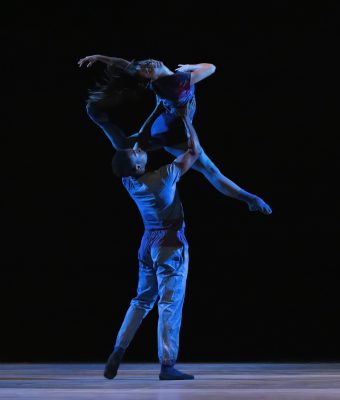 Two of the program’s remaining dances were choreographed by former NYCB Principal Dancer, and now LADP dancer, rehearsal director, costume designer, and choreographer, Janie Taylor. I’m not aware of Taylor having any choreographic history prior to the dances presented here, but assuming at least that these are early examples (Adagio in B Minor was created in 2019; Night Bloom in 2021), they’re quite respectable.

Adagio in B Minor is a pas de deux choreographed to Mozart’s identically-named composition. It’s a smoothly-designed piece, sweet and playful, and the two dancers, Daisy Jacobson and David Adrian Freedland, Jr., executed it well. Night Bloom, which closed the program, is fun to watch and is staged very well, but choreographically it’s too similar to her first piece, and includes a similarly playful pas de deux danced by the same pair of dancers, with little in the way of risk-taking. 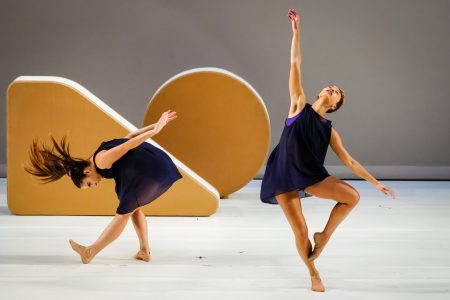 However, what makes Night Bloom as enjoyable as it is is the set and its integration with the choreography. [In addition to the choreography and a share of the costuming, Taylor is credited with the ballet’s concept as well.] As the piece begins, the stage is set with two or three rectangular-shaped constructions that look like mattresses, and two smaller pieces, one that’s square-shaped, and another that’s round. During the course of the dance the six dancers play with the arrangement of these constructions, moving them up and around to various positions in front of which, or behind which, or occasionally on top of which, the dancing takes place. It’s great fun, and the cast appeared to be having fun with it also. In addition to Jacobson and Freedland, the cast included Mario Gonzalez, Peter Mazurowski, Vinicius Silva, and Nayomi Van Brunt. 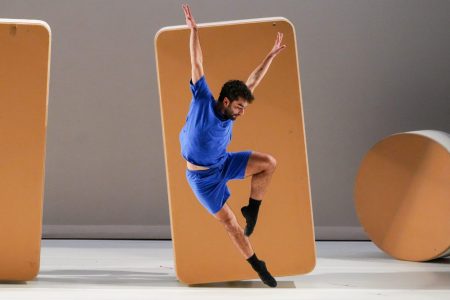 It was also a good antidote to the dance that preceded it – perhaps the most cerebral piece on the program, but to me the one that’s most problematic. By “cerebral” I don’t mean that the other dances aren’t created with abundant intelligence, just that 5 Live Calibrations wears its cerebral qualities on its sleeve. As a result, ultimately the piece came across like the visualization of a master’s thesis.

Created in 2019 (it premiered in Paris; a month later it had its U.S. premiere in Los Angeles), Madeleine Hollander choreographed 5 Live Calibrations to a score created by her sister, Celia Hollander. The dance (and of course the score) consists of five movements of varying lengths. At first it looked intelligent and colorful, and watching the dancers move within various complex movement patterns without bumping into each other made the piece look interesting as well. But as it progressed, it grew increasingly tiresome. 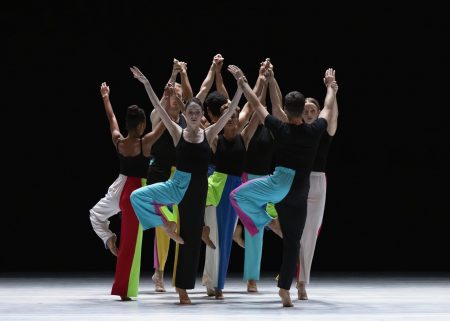 According to the program note, each of the dance’s five movements “is inspired by physical techniques for calibration, re-orientation, geo-location and balance, as practiced on human, industrial, and cosmic scales. Featuring choreographic sequences that rely on elements of chance, the conditions guiding this work guarantee that each performance be entirely unique. The choreography sets in motion an infinite number of possible outcomes that remain unknown to both the dancers and the audience until they unfold in real time.”

All that is undeniably interesting in the abstract. But there’s a lot an audience doesn’t, and can’t, know – like what it is that triggers a change from one pattern to another. Logically it would have to happen at particular points in time in the score or in the patterning (maybe the number of steps), which would limit the universe from which the infinite number of outcomes might apply. More significantly, even if it’s true that there are an infinite number of possible outcomes, the audience only gets to see one of them, so a critical component of the dance wouldn’t be knowable, or even relevant, to any single audience. 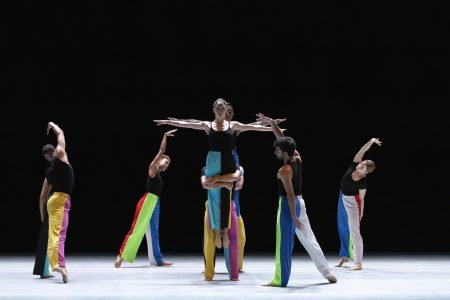 Accordingly, no matter how intelligent and unique the basis for the choreography is (and how much of it is actually choreographed rather than being random movement), and how well executed it is by the dancers, any interest based on the program’s description (which I don’t doubt is the dance’s premise) wanes quickly, and it becomes just another dance with dancers moving in changing patterns to repetitious music.

I have another concern here, not directly related to this particular performance, but to the premise underlying it. To an extent, the program’s description limits the dancers to being cogs in a machine. Many “contemporary” non-narrative dances yield that impression already, but here being an impersonal cog is built in, making caring about the result less interesting. Why would anyone be interested in seeing programmed positioning and re-positioning of cogs in a machine, whether human, industrial, or cosmic? Does visualizing the internal calibration of a spaceship, an assembly line, or a train engine matter, if that’s all there is? Are choreographers the equivalent of industrial or astro-physical engineers?

Moreover, as visually interesting as the dance sometimes is, at least at its outset, the music to which it’s tethered (repetitious, electronic) invites machine-like, rote, even martial, movement, compounding the visual sense of the dancers being cogs in some greater machine.

A “gimmick” of the piece is to have each movement end with a gradual lowering of the house curtain until it almost touches the stage floor, accompanied by the score sounding like an automobile engine gradually running out of gas, only to be stopped just before it hits the ground, then rising again to a scene of the dancers in somewhat different formations than they were in when the curtain came (almost) down, ready to proceed with the next movement pattern, which, once it commences, doesn’t look particularly different from the previous one. For all intents and purposes, however, these are all false endings that change nothing (at least nothing visible), succeeding only in making the dance last longer than it should have – as well as making the whole dance look a little sloppy since the dancers’ feet could be seen scurrying into place within the space between the nearly-closed curtain and the stage. 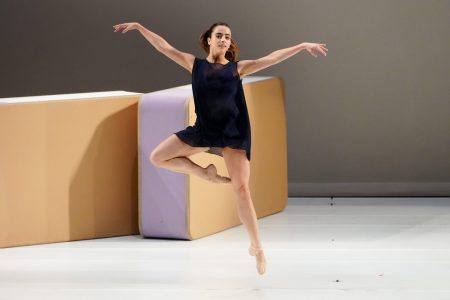 The piece was enlivened by the performances (the eight-dancer cast, with no one dancer’s role distinct from another’s), as well as by Anna-Sophie Berger’s costume design, which made the piece, literally, colorful to watch. Eventually, however, even the costumes (vertical swatches of color) looked more programmed than randomly distributed. The dancers were: Doug Baum, Lorrin Brubaker, OliverGreene-Cramer, Daphne Fernberger, Sierra Herrera, Payton Johnson, Mazurowski and Van Brunt.

Notwithstanding some of my comments above, I enjoyed watching this program, and will also enjoy seeing where Millepied takes LADP in the future. I understand that he’s working on a new iteration of “Carmen.” Perhaps a staged “Black Swan” will come down the freeway soon too.