Carla Korbes and Janie Taylor have long since retired from the companies with which they cemented their enviable reputations (Pacific Northwest Ballet and New York City Ballet, respectively), so anytime one has the opportunity to see either one of them performing on stage again is cause for celebration. And the possibility of seeing them on stage together is enough to make a balletomaniac drool. As part of L.A. Dance Project’s two-week return engagement at the Joyce Theater, Korbes and Taylor are doing exactly that, performing in a duet created for them by Artistic Director Benjamin Millepied: In Silence We Speak.

It was indeed great to see them on stage together. But it would have been even greater had the piece been worth their talents. Indeed, unless you enjoy Merce Cunningham’s ascetic choreography, and with the possible exception of the final dance on the program, Millepied’s Orpheus Highway, none of Program B’s four pieces is worth a second view.

Justin Peck’s Murder Ballades, which opened the evening’s program, has been around the block a few times since its 2013 LADP premiere in Lyon, France, including stints at BAM in 2014 and Jacobs Pillow in 2015. Although the program is silent as to Peck’s intent, the accompanying score of the same name by Bryce Dessner (who also composed the commissioned score for Peck’s disappointing The Most Incredible Thing, created last year for NYCB) is based on folk songs that relate to certain colonial or westward-expansion real or imagined murders. I’m not familiar with the songs, but my understanding is that the original songs include lyrics that are not a component of Dessner’s score.

Be that as it may, in the absence of any reference in the program notes to the composition being inspired by and/or adaptations of folk songs, or to the fact that specific folk songs are the names given to the distinct movements of the composition, the music as it is does not bring to mind folk songs – relating to murder or anything else. The score simply comes across as a compendium of music without focus – which is also an apt description of the dance to which it’s choreographed. 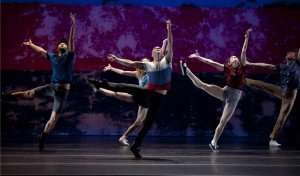 Peck’s dance is an additional degree removed from whatever connection there may have been to the murder-inspired folk songs, and consequently the connection to real or imagined murder, if there’s supposed to be one, is essentially non-existent. I briefly thought that the opening moments of the piece, when dancers race onto the stage from the wings to inhabit sneakers that had been strewn on the stage floor (a nice, very Peck-like opening image), might have been intended to direct the audience to view the dancers about to perform as “standing in the shoes” of the murder victims, but nothing that I could discern in the piece thereafter supported that.

The dance is roughly divided into relatively seamlessly flowing segments reflecting the movements of the composition. But in nothing on stage could I see any sort of connection from one to the other. Following the opening moments when they find their sneakers, the six dancers assemble as pairs, lay on the floor, get up, whirl around, coalesce again into pairs or groups or for an occasional brief solo, but there’s nothing unusual here; none of Peck’s sparkle or staging ingenuity is present. That being said, Peck’s exuberant choreography was wonderfully executed by all six dancers – Stephanie Amurao, Aaron Carr, Julia Eichten, Nathan Makolandra, Robbie Moore, and Rachelle Rafailedes (and the duet with Makolandra and Rafailedes was a standout). 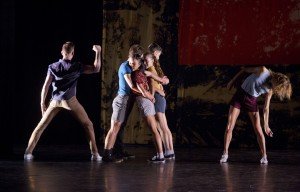 A MinEvent, according to the program notes, is an uninterrupted sequence of excerpts drawn from the work of Merce Cunningham. Essentially, it’s a Cunningham tasting menu in which the dishes aren’t miniature versions of larger originals, but bits and pieces of them. This particular MinEvent, with excerpts from what are described as “early” Cunningham dances, was staged for LADP by Silas Riener and first performed in 2016. Some of the dances from which the excerpts were drawn are identified in the program, but unless the viewer is a Cunningham aficionado there is no way to connect any particular excerpt with any particular dance source.

But that’s not necessarily a bad thing in terms of the presentation itself. Essentially the MinEvent quickly morphs into a free-standing piece of its own, albeit comprised of unidentified excerpts from the original Cunningham dances.

I liked certain of the passages presented (I don’t know if the “passages” were complete excerpts or portions of an excerpt), usually in those rare instances in which the dancers acknowledged each other’s existence, even if only by connecting physically. The portions of the MinEvent that appear to focus exclusively on bodies moving in space, sometimes interestingly, sometimes not, I could appreciate on an academic level, as if reading a visual movement dictionary, but was otherwise valuable only to the extent the dancers demonstrated their command of and commitment to the style, which in the case of the eight LADP dancers (the six already named, plus Lilja Ruriksdottir and David Adrian Freeland, Jr.) was exceptional. I also spent considerable time eyeing the piano manipulations of Adam Tendler, who played John Cage’s Music for Piano live. Tendler’s show was at least as interesting as the dance – at times more so. 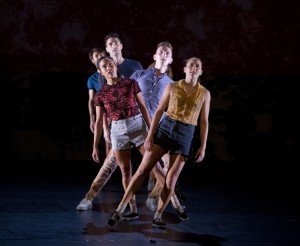 The evening concluded with what might have been the program’s best piece, the world premiere of Millepied’s Orpheus Highway. With a title like that, one expects a dance relating to the Orpheus myth that takes place on a highway, and indeed, that’s what you get. But that’s not really what the piece is about. The dance’s apparent reason for being is to take video and choreographic integration to a new level. And in that respect, it succeeds.

Essentially, there is a film displayed on a large upstage screen, and action in front of it on stage. It’s integrated – by that I mean that the dancers shown in the pre-recorded video and the dancers performing live on stage are the same, and much of the time the choreography on stage either mirrors the action on the screen, or, alternatively, the action flows from one medium to the other seamlessly.

I’ve seen this before, many times – indeed, an early conception of the idea of integrating dancers on stage with a projected video of them was presented during a recent Joyce retrospective of the work of Lucinda Childs, in her landmark 1979 piece, Dance. In recent years I’ve seen several other examples, including Mats Eks 2011 Bye for Sylvie Guillem’s extended “farewell” performances, and emerging companies that attempt to merge video with complementary action on stage with varying results. But Orpheus Highway does indeed take this concept to a significantly more refined artistic level. Kudos to all involved, including the video system designer, Eamonn Farrell, and Millepied for his direction of the integrated video and stage choreography (to Steve Reich’s Triple Quartet, played live by PUBLIQuartet).

But the piece’s technical accomplishment is only part of the presentation; other parts of the dance, including its subject, are contrived and just silly.

Orpheus Highway is a retelling of the myth of Orpheus and Eurydice, with the mythological pair played by contemporary dancers (Rafailedes and Freeland) seemingly playing themselves, with an additional seven dancers functioning as a sort of dancing Greek Chorus. So far, so good.

In the original myth, upon his wife Eurydice’s death resulting from falling into a nest of vipers (or, alternatively, being bitten by a serpent) while trying to escape from malevolent Satyrs, Orpheus convinces the gods to let him travel to the underworld and bring her back, to which the gods agree on the condition that Orpheus not look at Eurydice until they’ve both exited the underworld. Of course, Orpheus turns to look at Eurydice too soon, thereupon losing her forever. [Orpheus’s Lot in life thereafter, whether out of loyalty to his dead wife or for some other reason, was to eschew women (but not men), leading to his being torn to pieces by scornful women followers of Dionysus, reportedly during a Dionysian orgy. I can see a new iteration of Walpurgis Nacht, with Orpheus as its chosen sacrifice, just around the choreographic corner.]

That Millepied intends in this piece to adapt the Orpheus/Eurydice myth is incontrovertible. But by using a somewhat barren highway as representing some sort of highway to Hades; and by having Eurydice, in the course of a frolicsome romp with Orpheus, intentionally (and inexplicably) separate herself from him, run through a dreary, seemingly abandoned highway truck stop, and then, off-screen, get hit and killed by something (presumably a truck), Millepied reduces the myth to the mundane, and the piece from a success to a puzzlement. Couldn’t he have found another way to give the Orpheus/Eurydice myth a contemporary update without also eliminating its more cosmic significance?

The penultimate piece on the program was the dance I mentioned at the outset of this review, In Silence We Speak (which premiered the previous night). As opposed to what he did with Orpheus Highway, Millepied tries to elevate this duet into something more special and spiritual than it is (essentially, two women coming together, separating, coming together again, separating again…and in the process displaying deep affection for each other), abetted by the accompanying score (three compositions – or excerpts therefrom – by David Lang: oscillation and sweetness; you will love me; and you will return). And indeed, from time to time there are isolated images and sequences that are lovely. But In Silence We Speak is nothing more than a glorified female buddy dance that’s taken to a higher level by the presence of two former NYCB ballerinas who can still connect with an audience whenever they step on stage.

Although In Silence We Speak (which is included in both of the LADP programs) is weak, the opportunity to see Korbes and Taylor (who are both now listed as members of the company) together on stage dancing anything at all is worth the pilgrimage to the Joyce. The company’s engagement at the Joyce continues through June 25.