Benjamin Millipied founded L.A. Dance Project (LADP) in 2012 as an artistic collective performing dance works by a range of choreographers, old and new. Only a few months later, he was appointed Director of Paris Opera Ballet, but will leave at the end of the current season, telling Roslyn Sulcas of The New York Times, “They need someone better suited to run this company.” During that time LADP has toured to 11 countries and performed works by Forsythe, Cunningham and other luminaries of the dance world as well as a trio of works by Millipied sponsored by jewellers Van Cleef and Arples, famed for their inspiration for Balanchine’s Jewels . For this London visit, Millipied selected two works from the trio alongside Sidi Larbi Cherkaoie’s Harbor Me. 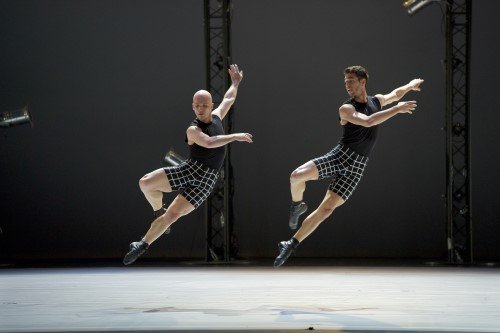 Hearts and Arrows, the second in Millpied’s series, features the wonderfully dancey music of Philip Glass String Quartet No.3 and eye-catching costumes by Janie Taylor featuring black tops and matching shorts and skirts with a black and white chequer board pattern. Millipied’s characteristic mix of ballet and contemporary steps reflects the energy of the music with outstretched arms, rapid jumps, turns, thrown bodies and ever changing patterns. I was particularly impressed by his use of the three dimensional space, including one short scene with a circle of dancers undulating fluidly then falling back to the ground leaving a single figure standing while the ensemble continues to develop the movement. 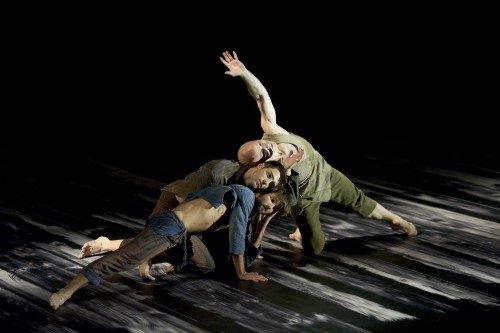 Sidi Larbi Cherkaoie consistently maintains the highest standards of choreography and Harbor Me is no exception. In the programme notes, he speaks of a harbor as a place of shelter but also a border that can turn you away. He also encourages us to imagine each dancer in the trio representing an element: fire, water, air; three men at this performance and, intriguingly, three women the next evening. The music by Korean composer, Park Woojae, is slow and atmospheric and the dancers weave around each other in the closest proximity, supporting and enveloping in a series of exquisite tableaux. The inventiveness of Cherkaoie’s constructs on the three bodies is breathtaking and in the latter sections the dancers combine to make a series of fascinating shapes with their hands. Cherkaoie poses the question, “Can one person truly protect another or only change or destroy them?” but in Harbor Me we see a triumph of co-operation and positive interaction. Aaron Carr, Morgan Lugo and Robbie Moore seem inspired by the choreography to produce movement of the highest quality.

The evening closed with the première of the final work Millipied’s trilogy, On the Other Side. Mark Bradfords’s beautiful, bright, mosaic back drop, vivid single colour costumes by Alessandro Sartori, light, attractive music by Philip Glass and a dedication to Millipied’s wife and son all point to a celebration of the positive possibilities of life. After an ensemble opening we see a series of encounters in Millipied’s elegant style. Yet for all the well-crafted skills he brings to bear, On the Other Side is much too long at 45 minutes and there is insufficient variety to maintain interest..

Overall, with strong dancers, all but one graduates of the Juilliard, and an eclectic repertory guided by Millipied, LADP are certainly a company to watch.