When I write a review, I have a nasty habit of trying to find something positive to say about a piece while minimizing its initially-perceived deficiencies. Indeed, I often leave a theater scratching my head, and then obsessively walk myself through all the choreographic and performance details, compulsively reexamine my initial evaluation, and often end up convincing myself of the choreographer’s noteworthy accomplishment.

Not so with Sharon Eyal’s OCD Love, which opened a five day engagement on Wednesday. No matter how often I replay it in my mind, and no matter what generous evaluative criteria I consider,  OCD Love is a bewildering disappointment. 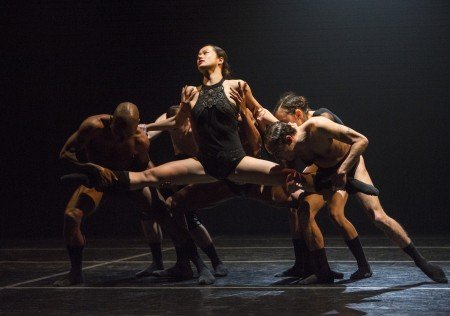 Eyal was a highly regarded dancer with Israel’s renowned Batsheva Dance Company from 1990 to 2008, its co-Artistic Director from 2003-2004, and its House Choreographer from 2005-2012. In 2013, she created L-E-V Dance Company with her long-time partner and collaborator, Israeli DJ/Producer Gai Behar. This was L-E-V’s Joyce Theater debut.

Based on the two previous examples of her work that I’ve seen, Eyal’s choreography is relatively idiosyncratic – filled with gelatinous gyrations, contortions, minimalism within a complex and largely angular presentation, grotesque positions, and sexually ambiguous movement quality, interspersed with the occasional recognizable arabesque. Under any set of criteria, while it may be unnecessarily dense, her choreography is never boring. I enjoyed one of these dances a great deal (Sara, which was performed at the Joyce in 2015 by NDT2), and found the other (Bill – presented at the Joyce last year by Ballet BC) to be curious and somewhat generically tribal. OCD Love, however, misses the mark. 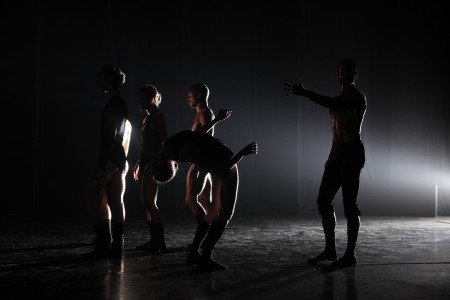 Though stylistically abstract, the dance is supposed to have a point beyond depicting bodies moving in space. We know this both because OCD Love wears its presumed significance on its sleeve, and because Eyal tells us its genesis, and what it’s supposed to be “about.”

OCD Love was purportedly inspired by Neil Hilborn’s pithy, riotous, and yet compassionate take on an obsessive compulsive relationship (more accurately, a relationship in which the narrator/speaker is obsessive/compulsive about it) titled, simply, OCD. Hilborn’s reading of his piece at a 2013 poetry slam has become a YouTube hit (over 12 million views) because, in addition to being hilarious, it’s so sadly spot on.

But if Eyal’s OCD Love was inspired by Hilborn’s poem, you wouldn’t know it. Rather, as Eyal indicates in the program notes, the dance’s theme is the inability of people to connect in a romantic relationship; “love that always misses, or lovers who keep missing each other.” An actual relationship impacted by OCD akin to that described in Hilborn’s poem never exists in the dance.  More significantly, the obsessive compulsive disorder that presumably prevents a relationship in the dance from forming in the first place – presumably the connection with the Hilborn poem – is never depicted either. There’s just the inability to connect, with no reason given. In a piece that’s titled OCD Dance, this omission is fatal. 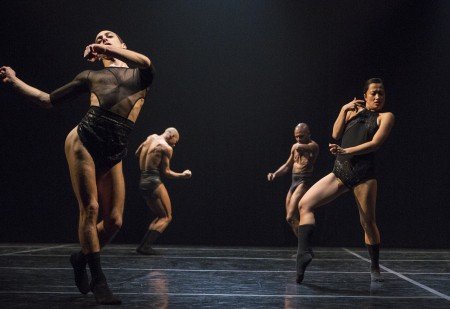 That the dance is about the failure to connect – for some inexplicable reason – is obvious from the outset. A single dancer, Mariko Kakizaki, in an atmosphere of darkness illuminated by one relatively weak overhead beam of light, slowly stretches her body while remaining relatively planted upstage right, and raises her arms outward and upward – reaching out in the darkness to, or for, something. Fine – the audience knows she’s alone and yearning for a connection. Eventually, Kakizaki moves across the stage at the same ponderous pace, and repeats the action under a second, and then a third, overhead beam of light, eventually returning center stage. At this point a man (Darren Devaney) appears from the wings upstage left, and, to the same painfully slow pace of the music (by another of Eyal’s frequent collaborators, Ori Lichtik) traverses the perimeter of the stage in a somewhat contorted position, with one forearm and hand permanently extended – presumably an indication of his availability and willingness to be connected with. The two of them never actually come together. Fair enough – that’s the theme of the piece.

The three men (Gon Biran, Shamel Pitts, and Leo Lerus) who join the others don’t move the dance forward, and have no discernable function other than to add depth to the stage (which would be fine, except the piece calls out for more). The temptation is to treat these other L-E-V dancers as, perhaps, embodiments of whatever it is that prevents Kakizaki’s character from connecting. But that doesn’t work either, since there’s no clarity as to what emotions or actions, if any, they’re supposed to represent. Indeed, to the contrary, these dancers don’t appear to be manifestations of any particular emotional quality or disorder component: they’re just “forces” that sometimes move in sync with each other, and sometimes dance individualized solos for no apparent reason beyond reflecting each dancer’s individual virtuosity:  furies that exist in a consequential vacuum.  The impact of these forces on the potential relationship is not explored.  It just is. 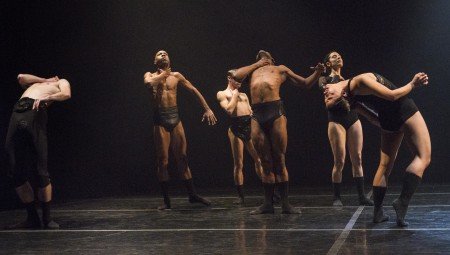 The one character who is different is the second female character (Keren Lurie Pardes), whose movement quality is particularly contorted and grotesque – almost insect-like at times.  But if she’s supposed to have a thematic relationship to the other dancers (perhaps she’s intended to represent Kakizaki’s suffering alter ego who both reflects Kakizaki’s agony and tries to goad her into overcoming it), it’s not clear.

The piece definitely has a “growth” aspect to it, moving from the primitive, achingly slow expositional opening to the increasingly relentless pace as the score pushes the movement forward, but other than keeping up with the score, it doesn’t add up to anything. And while there are occasional moments of choreographic insight (at one point Pardes is held upside down by two men, who then use her head like a croquet mallet to try to prod Kakizaki into doing…something) and surprise (an intentionally gut-churning false happy ending), these moments are few and far between, and overwhelmed by movement that is awkward or inappropriate (fingers poking into and out of ears; sexually ambiguous movement that makes no contextual sense).

The result of all this is a dance consisting of variations on a theme that fail to add depth of meaning where an explanation, rather than just a recapitulation and exposition, is what’s called for. In the end, all that’s left here is a theme waiting for choreography to illuminate it – and an insatiable head-scratching opportunity.