Les Ballets de Monte-Carlo returned to New York on Thursday night for a brief 3 day, 4 performance run of Jean-Christophe Maillot’s Cinderella. Though uneven, Maillot’s conception presents the standard story through a unique prism, with the result being not only different, but enriching.

With apologies to Jerry Lewis, Maillot’s ballet could just as easily have been called “Cinder-fella.” No, it’s not about a male Cinderella, but its shared focus, if not its central figure, is a man. Portraying Cinderella’s father (generically identified as The Father) as not just an inconsequential or incomprehensible character opens up the story and ultimately hammers the heart more than your usual Happy Ending ever could.

As is evident by the recent performances in New York of his Romeo et Juliette (created in 1996) and LAC (2011) Maillot, Monte-Carlo’s Artistic Director and Choreographer, enjoys choreographing story ballets, but sees no reason to recreate white-bread versions of them. He changes things – sometimes a little; sometimes a lot. In Romeo et Juliette, for example, he reimagined the character of Friar Laurence in a way that I found strained and confusing. Nevertheless, I enjoyed the ballet itself very much because at its heart – the story of kids in love and of the society in which they lived – it was real. In LAC, Maillot invented a confusing, convoluted backstory, making LAC almost unrecognizable from the Swan Lake story upon which it is purportedly based, and decidedly unreal even as a fantasy.

Cinderella, created in 1999, is more akin to the former than the latter. There’s a lot of standard operating ballet-story-stuff to wade through first, but the end result is worth the effort. Maillot’s Cinderella is not just a fairy tale about Cinderella, or simply a story of good triumphant. It’s about love transcendent. 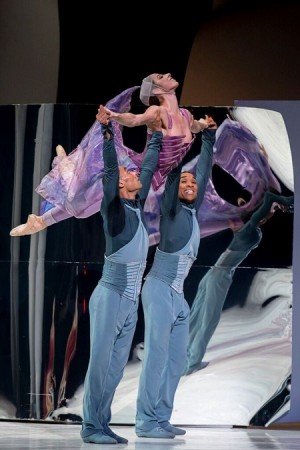 The basic Cinderella story with which most people are familiar is the version by French author Charles Perrault – the one with the fairy godmother, the pumpkin coach, the ticking clock, and the glass slipper. But the story itself as a morality tale (there is this unfortunate heroine, often persecuted by a wicked stepmother or other relative, who, through her own virtue – and often with the assistance of some magical and benevolent force – ultimately triumphs over adversity) has been around the block, or the globe, in multiple incarnations that span multiple cultures long before Perrault included his version in a compendium of stories in 1697.

In the set to his Cinderella, Maillot and set designer Ernest Pignon-Ernest salute Perrault by having his name emblazoned on a wall-size ‘page’ from the story, one of several such structures that together span the stage as the ballet begins (and which cleverly convert into scene dividers later). But Maillot’s version isn’t Perrault, or any of the various iterations of the tale that preceded his. Nor is it the one created by the Brothers Grimm (1812), though in some ways it’s closest to that. Creating a sympathetic father who truly loves his daughter and his first wife, and intensely dislikes his second wife and her daughters, may well be Maillot’s own unique take on the basic story. And although this approach begs a new question of its own (why, if he disliked his second wife so much, did he marry her and continue to stay with her knowing how she and her daughters were tormenting his own child?), Maillot anticipates and answers it: Daddy, it turns out, is somewhat of a masochist – albeit an amiable, compassionate one – who submits robotically to his second wife’s sexual dominance even though the abuse that his second wife inflicts on his daughter tears him apart.

Maillot lards his version with superfluous, essentially unfunny characters who remotely resemble characters in other Cinderella ballets: a pair of Pleasure Superintendents (neatly danced to Maillot’s hyperactive choreography by the nearly identical-looking brothers Alexis and George Oliveira); four Friends of the Prince; four half human, half mechanical Mannequins who double as characters in an unnecessary and confusing ‘story within a story’ presentation of the Cinderella tale; and four Exotics who attempt to convince the Prince that each is the girl he fell for at the ball – or at least is a serviceable replacement. With the possible exception of the Exotics, none of these characters matters except as filler for Act I of the ballet (encouraged by the Prokofiev score), and as vehicles for some manic-looking choreography.

And the roles of the step-sisters (collectively called The Sisters) and Stepmother are similarly one-dimensional, although that’s not unusual. Here, however, the step-sisters are non-entities, neither nasty nor comic, and there’s little interaction between them and Cinderella – although Gaelle Riou and Anne-Laure Seillan dignify the choreography assigned to them. In many other ballet versions of the story, the Stepmother is a ridiculous figure; either intoxicated or cartoonishly malevolent. In this version, there’s nothing humorous about the Stepmother at all: She’s a nasty sensual witch for whom sex is the equivalent of casting an evil spell – a quality that Maude Sabourin conveys convincingly. 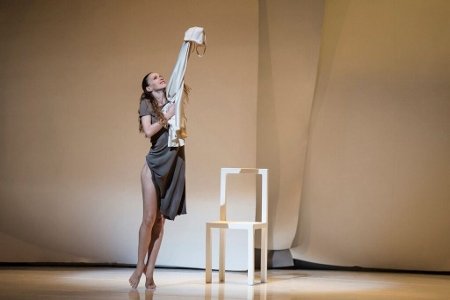 The three also serve a different, but related function – to display Jerome Kaplan’s strange costume designs. When they’re not parading like women from some abandoned space colony, the step-sisters wear halves of a dress designed for them for the Prince’s ball, with a pointy prong arising from the side of the gown’s bottom – one sister’s prong emerging from the left of her half-gown, the other’s from the right. (This is not a bustle extending from the dress’s rear below the waist – it’s a prong, emerging upward from the dress’s bottom, somewhat like a tail.) The dresses look as garish as the sisters. But when the Stepmother herself appears in the gown the way it’s supposed to be – with the prong centrally located at the rear – the purpose of the design as ‘coup de costume’ becomes apparent. When it dawned on me that the costume logically represented Maillot and Kaplan’s summation of these women’s characters – that they’re nasty insect-like humans who metaphorically poison others through not so subtly delineated attached stingers, I nearly broke out laughing.

As portrayed by Lucien Postlewaite, the Prince in this version is an entitled brat. We know this because he treats women like disposable sex toys (not so coincidentally, female ‘guests’ who populate his ball are identified in the program as ‘courtesans’), relishes the company of his vacuous friends, and because when he enters his own ball, Maillot has him slide ignominiously down the staircase bouncing on his butt.

Cinderella’s mother/fairy godmother, danced by Mimoza Koike, is a two-sided character within one body. The ‘Mother’ is gentle and loving to her husband (though only a beloved memory to her daughter), but as the Fairy, she adds motherly guidance and magical, visionary power to her character. It may have been Maillot’s intent, but I found this character – except in the lovely duets with her husband – strangely distant and somewhat mechanical. The characterization, however, is not as important as the theatrical visualization. After dying, Cinderella’s mother is engulfed in an overhead ray of gold glitter from which she presumably is transported to heaven (similar-looking to the shimmering visualization of ‘energized’ transport in the Star Trek TV series). The glitter apparently sticks as the soul rises through it: as the Fairy, Mother returns enwrapped in gold glitter.

Cinderella is your sweetheart of a suffering soul – though the suffering in this version seems relatively minimal: there’s no besooted fireplace; no tables to clean; no clothing to wash; no floor to sweep. There’s just a lot of nastiness from her stepmother, and a bowl filled with lentils for her to sort (a Cinderellean task mentioned in several story incarnations). Nevertheless, in the person of Anjara Ballesteros, this barefooted Cinderella (one foot adorned by her mother The Fairy in…gold glitter) is delightfully luminous; her engaging stage presence alone makes her character, and the ballet as a whole, soar whenever she’s on stage – and particularly in the superbly executed duet with the Prince as they fall in love, explore their emotions, and concurrently outline the parameters of each other’s bodies. The physical component is as necessary as the emotional – and like similar choreography in Maillot’s Romeo et Juliette, this example of sexual ‘first contact’ couldn’t be more appropriate.

The tie that ultimately binds this Cinderella together, however, is Cinderella’s father – a conflicted figure who can’t escape his domineering second wife but loves his daughter and his dead wife to distraction. Gabriele Corrado imbues him with the combination of passion and pathos, of despair and determination that make him the most human character in the ballet. It is her Father’s heart that the audience sees the most – from the initial in-love duet with his first wife (which Cinderella imagines during the ballet’s Prologue), to his ‘bequeathing’ his wife’s simple white dress to his daughter, to his anguish at his daughter’s suffering at the hands of his second wife, to visions of his first wife that effectively provide him with an alternative, and preferable, reality.

Ballet is more than a collection of images, but images can be indelible. When, at the Prince’s ball, the Father dances with the vision of his dead wife (in the form of the Fairy) parallel to the Prince dancing with Cinderella, both men enraptured, the viewer’s heart, and the ballet, finally, takes flight. It’s a wonderfully conceived scene.

But it gets better. Toward this version’s conclusion, The Father finally rejects his second wife for the more satisfying memory of his love for Cinderella’s mother. But his torment, his misery, and his love, remain. And as the ballet ends, he raises his hand in despair – outward toward the sky, to the memory of Cinderella’s mother, but also toward his daughter, departing with her Prince to their future. Both the sorrow and the joy are evident: it’s one of those heart-wrenching images that is so brilliantly imagined and executed that it’s almost too much for a viewer to bear. And it makes everything it took to get there – the at times forced choreography, the cardboard characters, the butchered score – worth the effort. It tears you apart and makes you whole at the same time, and is a unique Cinderella image that I suspect I will not soon forget.