Dance companies invited to perform at the University of Maryland engage with students, of course, offering master classes, etc. It was apparent there was a warm rapport between the university’s dance students and company members of Les Ballets Jazz de Montreal (“BJM”) due to the loud shouts of appreciation from the students in the audience. The performance definitely merited the enthusiastic response it received. According to program notes, BJM’s performances are “sexy, explosive, original and accessible.” The company lives up to its billing. It’s clear that the youthful company appealed strongly not only to the dance students in the audience but to the audience as a whole.

The first work on the program, Rouge, was choreographed by Rodrigo Pederneiras of Brazil’s Grupo Corpo. For me, Rouge, described in the program as “an ode to resilience, a discreet tribute to Native peoples and their musical and cultural legacy,” was the highlight of the evening. Creating a tribute to Native peoples is a daunting challenge. With such sensitive and significant subject matter, there are lots of ways Rouge could have taken a wrong turn and didn’t. From the Native-American inspired costumes by Kristin Hofmann (the women wore beige sheath dresses with dark geometric designs and fringe at the bottom and the men wore black armbands), to the Amerindian influenced music by Les frères Grand (including throat singing and sounds from nature), to the lighting design by Gabriel Pederneiras (featuring a glowing red light that rose and fell like the sun), to the movement itself, Rouge payed beautiful homage to a strong community. The dance in no way mocked or insulted anyone. Perhaps key to this feat was the fact that the choreography seemed fresh and inventive and did not particularly resemble tribal dance. Instead, Pederneiras’s contemporary choreography told a remarkable and respectful story of perseverance and the fight for freedom and identity.

In Rouge, the dancers start in a clump, scooting forward in an almost militaristic manner, with one leg jutting just ahead of the other. They move fearlessly, with passion, and their high energy continues throughout the lengthy piece. In many instances, the upper bodies of the dancers move in waves, evoking images of water — fast moving water. The pace of Rouge is relentless, the dancers raw and fierce. A glance could reveal a dancer flying through the air in one moment, and rolling on the floor the next, followed by a rapid sequence upright again. One’s emotions follow suit. I felt myself wanting to cheer “Go!” to the heavily breathing dancers. The frequently frenetic choreography sometimes got the better of them, but this didn’t detract from my enjoyment of the work. 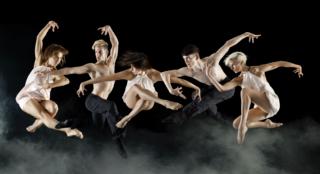 Benjamin Millepied’s Closer, both stood in contrast to Rouge, and also echoed it. Closer is an intimate duet, quiet and tender where Rouge is forceful and loud. Like Rouge, however, Closer keeps its dancers moving at impressive pace. Millepied’s choreography isn’t packed with surprises, yet it’s perfectly pleasing. The rewards of Closer are in watching a caring relationship unfold and hug you back. The music, Philip Glass’ Mad Rush, flirts with repetition, and the dancers appear to fall in love repeatedly, growing in their connection as the work goes along.

The unnaturally pinkish-red hair of Celine Cassone, and the blonde streak of hair atop the head of her partner Alexander Hille, made them appear edgy and hip. Their duet came across as more conventional than their hairstyles, though. In a short wispy white slip of a dress, Cassone floated across the stage, lifted and worshipped by Hille. The audience got ample views of her rear end, as she was often placed back on the ground in front of Hille, cozying up to him with her back to the audience, her tiny dress caught between them. While held aloft in the air, Cassone’s knees often came up to her armpits and kicked out, but not in anger. Instead, her strength seemed regal.  Momentum built until the couple ended up sitting on the floor, intertwined, and breathing heavily like the dancers at the close of Rouge.

Andonis Foniadakis’ Kosmos didn’t give the dancers a break. If anything, it demanded even more of them. Kosmos is one of a large number of contemporary works I’ve seen where the dancers wear black, there’s dry ice, the music (here by Julien Tarride) is tough sounding, and the effect is dark and futuristic. Did someone move mechanically like a robot, as I’ve seen umpteen times in a work like this? Yes. Was there a voice talking in the style of a 1950s educational film? Yes. What I hadn’t seen done before as it was done in Kosmos was the curiously obscuring lighting design that emerges late in the work. To give too much away about the unusual lighting would spoil the impact for future first-time viewers. However, while clever, I quickly grew weary of the lighting trick and the acrobatic tricks the dancers performed under its disguise.

In my opinion,  Kosmos goes on too long. Maybe with more editing, I’d have liked it better? As is, I got bored in spots. I did admire the opening of Kosmos, where a single dancer introduced a percussive rhythm with hand slaps and stomps of her feet that were copied by dancers who joined her on the stage. A moment of delight erupted when a dancer suddenly moved without stamping out a pattern on the floor. The middle sections of Kosmos, however, lost me a little bit. Somersaulting here and there, a succession of gymnastic moves and wildly flinging limbs became chaotic, and the dramatic tension fell slack. The intense physicality of Kosmos was on par with Rouge and Closer, but the work simply didn’t cohere, in my view. What felt sincere in Rouge and Closer, felt like a contrived attempt to be quirky and cool in Kosmos.