Les Ballets Jazz de Montréal returned to New York, and to the Joyce Theater, for its first New York engagement since a Joyce Theater program scheduled in 2012 had to be cancelled because of a little hurricane named Sandy. Louis Robitaille, BJM’s Artistic Director since 1998, selected three pieces for the program that exemplify the company’s energy and speed, and that stretch physical ability to the limit: Rouge, Mono Lisa, and Kosmos. Although the three pieces, created by different choreographers, are all well-crafted for what they are, and were skillfully executed by the BJM dancers, they’re not my cup of choreographic tea.

Roderigo Pederneiras has been Choreographer for Brazil’s celebrated Grupo Corpo since 1978. His raw, high energy pieces have been celebrated world-wide. Choreographed for BJM in 2014, Rouge has met with similar reception. However, notwithstanding the undeniable choreographic expertise and the superb performances by the BJM dancers, I found the repetition of aggressive movement, almost without pause, disturbing and unnecessary.

The dance is a paean of sorts to Amerindian culture. We know that because the women are costumed in buckskin–like frayed edged costumes, the men wear considerably less, both wear stereotypical color markings on their faces (red for the women; black for the men) and because the movement has a percussive tribal feel. That’s fine. And there’s no question that Pederneiras is glorifying this culture. And that’s fine too. But what dignity there is among these Amerindians (no specific tribe is intended) is reduced to the same type of movement, repeated in slightly different formats for emphasis, and if there’s a significant stylistic difference between the dance’s different undefined scenes, it’s not apparent.

More significantly, however, there is also violence in the form of highly aggressive movement. It’s indisputable that there’s a place for that as well – including reasonably accurate reflections of what is presumably tribal-sanctioned violence against women. But here, at virtually every opportunity, a man is seen aggressively copulating (simulated), with a woman in a manner that by current sensibilities is disturbing, even if the woman in the act is not objecting. These aren’t love duets, passionate or otherwise: they’re visualizations of sex as power.

I use the phrase ‘current sensibilities’ advisedly – Pederneiras obviously is not concerned about current sensibilities. But in producing before current audiences, I think he has to be. Showing such violence once, maybe twice, as part and parcel of savage tribal behavior would have been sufficient to depict the way things probably were (if that was his purpose). Instead, whatever “dignity” may have been intended is lost: these savages are savages.

And in a central duet that makes no sense to me at all other than to break up the piece’s repetitiousness, one woman, Céline Cassone is costumed essentially in a red outfit that might be described as “tribal chorus girl” (perhaps lifted from an old Hollywood movie depicting the sexy female savage) and she and one of the men have an extended period of simulated eroticism and sex. Was she exemplary (if so, why the others)? The tribe’s entertainment for the evening? Or perhaps the chosen non-virgin to be mated with the most powerful man in the tribe as an offering to….well, you can only take this so far.

There is another way to look at this. The backdrop changes to a red color, and the stage becomes bathed in red light, sometime after the dance begins. And if I recall correctly, this aggression against women does not begin until this happened. It may be that with this “red sky,” and the “red pas de deux,” that Pederneiras is making a comment on the negative impact western civilization had on the innocent Amerindians – the “red sky” being some metaphor for contamination (cultural as well as environmental) which adversely affected their behavior. (There is reference in the program notes to “environmental concerns”.) But if this is what Pederneiras intended, the connection is not effectively made. 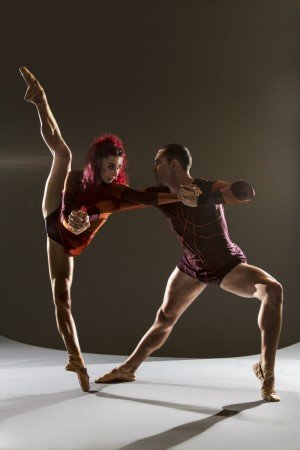 Mono Lisa, by Israeli-born choreographer Itzik Galili, has been around for a while. It was originally choreographed for the Stuttgart Ballet, and I saw it at City Center nearly three years ago on a program called Roberto Bolle and Friends, danced by Alicia Amatriain and Jason Reilly, Principal Dancers with the Stuttgart. I recognized it immediately at this performance, not only from its unusual title, but also from the ”‘scratch”’ opening sounds of the electronic score by Thomas Hofs (here Galili has been jointly credited with the music), and the ballerina’s exaggerated body positioning.

This version of Mono Lisa may have been changed a bit for BJM (it had its BJM “world premiere” less than six months ago), but not enough to make a difference. Supposedly a “dance of seduction”, it’s so only if hyperextended extensions and splits are considered seductive. Cassone, a company Principal (“Main”) Dancer who has significant ballet background (including stints with Bejart Ballet, Christopher Wheeldon’s briefly extant company Morphoses, and Daniil Simkin’s Intensio) has astonishing flexibility and control – her body must have been filleted at birth. Mono Lisa displays this aspect of her performing ability fully – and her partner, Mark Francis Caserta, was almost her match. But the piece overall doesn’t say or do much of anything beyond that. As I observed three years ago, at its core the piece is more about athleticism and showcasing the ballerina’s rubber bones and propeller legs than it is about artistry. Even with a ballerina as talented as Cassone, there’s a limit to how many times you want to see her spread-eagled or punctuating movement phrases with hip-thrusting 190+ degree arabesques.

The dance that closed the evening, Andonis Foniadakis’s Kosmos, was more interesting to me than the other two because I saw, or thought I saw, what Foniadakis was trying to do. The problem is it’s not done very well, choreographically – although, again, the BJM dancers did a fine job with it. 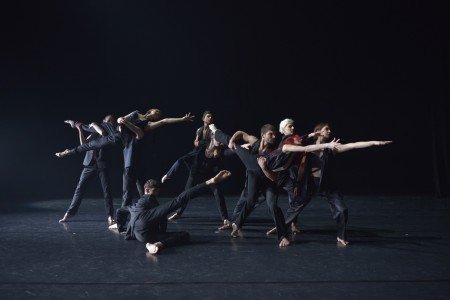 The dance begins with what appeared to be random movement in which one dancer might confront another and then move on, in pairs or somewhat larger groups, all at a frenzied pace. It looked chaotic. Taking my cue from that and the piece’s title, it seemed as if the dance was a representation of the chaos of clashing particles in space immediately following the Big Bang, before the universe “solidified” (relatively). Sure enough, as the ballet neared its conclusion, the pace of the dance changed to a slower, more ordered feel, with the dancers seen behind a scrim that was illuminated to make them appear as barely distinguishable bodies moving in space slowly, like planets or other astronomical bodies in a galaxy, or galaxies in a universe. I suppose that the dance could similarly be considered a commentary on an urban universe, with bodies moving helter skelter to wherever they’re going, and eventually seen as distorted shadow objects moving behind skyscraper walls.

But just because I’ve assigned a theme to it doesn’t make Kosmos a good dance. The frenetic movement goes on too long, is too repetitious (although what might you expect from colliding atomic particles, or people trying to navigate city streets, where walking is a contact sport?). For all its speed and quality of execution, it’s just dull.

Nevertheless, Kosmos and the other two pieces on the program clearly appealed to BJM’s audience, which, at least at the performance I attended, greeted each piece’s conclusion with a chorus of whoops and hollers, and with a standing ovation at the program’s end. So although it’s not my cup of tea, it’s obviously a choreographic beverage of choice for many.