Every now and then happy circumstance find their way onto my path and seeing Les Ballets Trockadero de Monte Carlo completely by happenstance this week was one of them. I was in Portland, minding my own business, walking to a private showing of the new gallery exhibit at the Oregon Historical Society’s great museum, when I noticed on the marquee on the backside of Portland’s historic and opulent Portland Theatre (rechristened the Arlene Schnitzer Concert Hall) that the infamous Les Ballets Trockadero de Monte Carlo was being advertised. Not being from the area, boy was I surprised and delighted.

Scooting in with a few minutes to spare, the program began with their company’s take on Fokine’s Chopiniana, followed by a parody of Merce Cunningham’s oeuvre and style, Patterns in Space, a superb work by founder Peter Anastos, Go For Barocco (which they certainly do), and concluding with one of my favorites, Paquita. 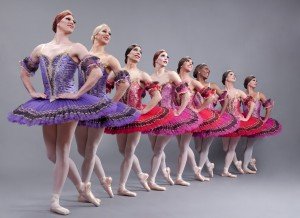 It’s been a few years since I’ve enjoyed this company and, as the saying goes, if you want to see some really good dancing, go see The Trocks, comedy and all. Even with the spoofery, the dancing remained superb and was often spot-on, both in terms of technique and style. Perhaps without realizing it, they’ve created something quite extraordinary — not just well-trained male dancers doing both and male and female parts of ballets but when the males do the female parts, they inject such a level of strength and degree of attack and control that may well be out of the reach of the female set. I mean no female (and I’ve seen quite a few wonderful ones) has ever gotten the elevation and ballon to the jumps and beats as these do; sometimes entrechats such as entrechats quatre and six are done with exaggerated openings of the legs to a la seconde as to be virtuostic. And not just big jumps but big arabesques, a few going into a complete vertical split on arabesque penché. Then there are the fearless multiple revolutions to pirouettes, 32 fouettés, more turns, more jumps — sometimes finishing having done the original choreography straight but adding double tours en l’air. Wowza!

Nina Enimenimynimova was letter-perfect in “her” Paquita lead ballerina variation. I know how hard (and fun) Paquita can be, having helped out a colleague teacher friend more than 30 years ago with a reconstruction for her advanced students, dancing the sole male part myself. Superb technique, finish and line. And then for the coda’s requisite 32 fouettes, she began with 4 turns from fourth position and then, up to number 16, alternated with doubles and then singles through 32. The only hee-hee being that she “high-fived” one of the corps members as she ran off stage. 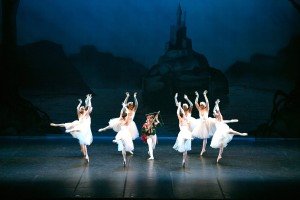 Corps and soloists were also excellent, executing the Petipa choreography with energy and verve — and a sense of fun and play.

While the audience guffawed at the obvious music-making fun of the faux John Cage-like musicians on stage for Patterns in Space laughing at the high-jinx of making music and sounds out of everyday items such as popping bubbles of plastic packing wrap or of other percussion “instruments.” I’m not sure they got the references to Merce Cunningham’s work with the three dancers who very much captured the essence of Merce’s unique movement vocabulary — off-center tilts of the torso, open legged scoots, simple leaps landing and holding arabesque. 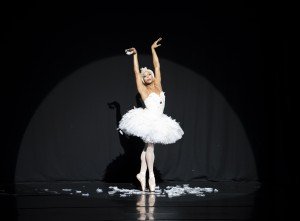 Following this was the solo made by Michel Fokine for Anna Pavlova, who made it her signature. The Dying Swan in this rendition is made silly with histrionics, much bowing (I think the curtain calls lasted longer than the dance itself), falling over, and being pulled off the stage. This was uncredited in the program, but whoever did it, was droll and affected the right amount of over-the-top staginess associated with this iconic piece. I have to note that the design of the costume is brilliant, allowing this swan to molt throughout; how do they do this? 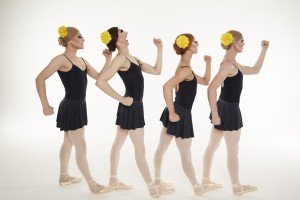 Go For Barocco is not so much a parody of Balanchine’s own Concerto Barocco, but is more a tribute inspired by it. Peter Anastos is a superior and excellent choreographer and, here, he’s a made a “real” piece. While light in tone, it is not just fluff. I love the corps work and the fun they have with the stage patterns and steps. One of my favorites was how they were all in a diagonal line and one at a time did a double pirouette and launched into a little side-step, hip, hands and foot en pointe, repeat left, and kept going as they all joined one at a time. Also delightful was how the two soloists “power-walked” to each other with hands in fists and elbows pumping.

Unexpectedly, following a well-deserved standing ovation following Paquita, the curtain came up on the full company, still in tutus and tights, with half wearing sombreros and half with serapes for a rousing encore piece of THE Mexican Hat Dance, done with equal amounts of joy and pleasure.

Guys en pointe: The Trocks are back

Fluttering feet and hairy chests: the Trocks in London