Les Ballets Trockadero de Monte Carlo (“The Trocks”) have been around since 1974. I saw the company for the first time in the early 1980s, and was completely smitten. In addition to being quite impressed by males who could manage pointe shoes, I remember cherishing the pink program with the hilarious Russian names and bios. I’ve certainly grown older, and the dancers aren’t the same ones I originally saw, but much is the same, including the amusing names and biographies. Among the creative Russian names this time were Ida Nevasayneva and Nadia Doumiafeyva. And from their bios, smiles were had at reading that Nevasayneva “became known as a heroine of the Revolution when, after effortlessly boureeing through a minefield, she lobbed a loaded toe shoe into a capitalist bank,” and that Doumiafeyva’s “fiery attack combined with lyric somnolence produce confusion in audiences the world over, especially when applied to ballet.” My urge to savor the printed program is the same today.

Just like decades ago, the Trocks performed both Act II from Swan Lake and the Dying Swan, only they did these works with greater technical accomplishment than I recall. In fact, although I read some recent glowing reviews before I saw the performance, I was still stunned by the level of pointe technique some of the male dancers have attained. In particular, I was blown away by Chase Johnsey (Yakaterina Verbosovich), who danced the part of Odette. I had read that Johnsey was the winner of the 2016 National Dance Award for best male dancer in the UK. This seemed like an odd choice, until I actually saw Johnsey dance. I understand now why he won that award. In addition to being charming and funny, Johnsey is seriously skilled. His lines are elegant, his passion strong, and his dancing stellar. So stellar that from a distance you could blink and miss the fact that he’s a man in a parody ballet and swear you were watching a first class ballerina. While I’m pretty sure the Trocks aren’t promoting having men cast in typically female roles in mainstream ballet companies, Johnsey makes a good case for this possibility. 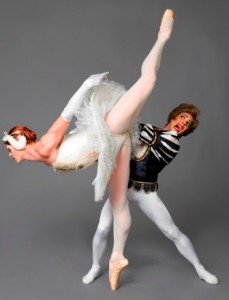 What I do think the Trocks promote is a love of ballet. Being able to laugh at ballet is an important aspect of loving it. The Trocks are over the top, and yet their brand of humor wouldn’t work if they didn’t poke fun at deep truths about this art form. The sometimes ridiculous and excessive mime that appears in so many classical ballets? The Trocks have got it covered. In hilarious exchanges, dancers wildly gesture for extended periods. This struck a chord precisely because extravagant mime is a pet peeve of mine. When the Trocks do it, it’s funny, but when Giselle is weighed down by repeated meaningless hand flutters, it’s annoying.

Do the Trocks make fun of those over the shoulder glances some ballerinas throw at the audience, the eyelash batting and flirtatious grins? Yes, of course! How about the delay before the music begins when a dancer desperately hopes the cue they’ve delivered has worked? One poor dancer walks all the way across the stage, stopping and pausing over and over, but never having the music start. The long waits by corps dancers captive on stage while the leads are engaged in a tedious drawn-out duet? One of the dancers in La Esmeralda munches on fruit as she sits impatiently waiting for a turn to dance again. Props that are more silly than effective? The tambourines in La Esmeralda and Don Quixote are shaken and rattled to death, and for once, it’s a delight. The Trocks find all of the minor irritations you might experience when watching ballet, and they brilliantly magnify them. Laughing at ballet’s foibles makes it all the more endearing. 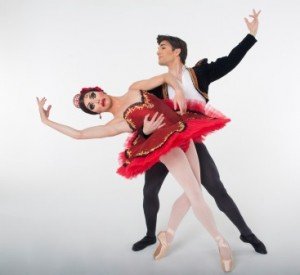 Helen Highwaters/Duane Gosa, in the signature role of the Dying Swan, was magnificent. Gosa’s dramatic excess was flawless, and I loved the piece as much as I did over thirty years ago. The molting feathers falling from the tutu and leaving piles across the stage, while the ballerina exaggerates her death are dance humor at its best. In my view, even if you’re not familiar with ballet and some of the inside jokes, you would enjoy this work. Even the most serious balletomane would have to crack a smile, at least, too.

Although Johnsey was the most remarkably convincing ballerina, again, that’s not really the point. And yet, overall, I enjoyed the non-humorous moments almost as much the abundant comedy. The couple in the pas de deux from Le Corsaire, Nina Enimenimynimova/Long Zou and Araf Legupski/Laszlo Major definitely wowed the audience. The duet was performed relatively straightforwardly. Both Zou and Major did an admirable job. There are plenty of “normal” professional dancers who can’t achieve the technical excellence they displayed. Zou’s arabesques were enviably beautiful, as were his amazing fouette turns en pointe. 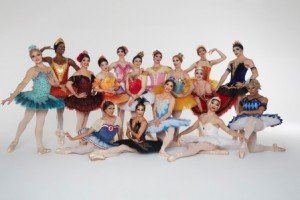 The ‘ladies’ of the Trocks
Photo Zoran Jelenic

In the current contentious atmosphere in Washington, DC, the Trocks were a welcome relief. The night was rewarding for many weary of politics, and the dancing allowed a light mood to be shared by all. The ties to Russia were perhaps even funnier given the news of Russian meddling in the U.S. presidential election. These “Russians” would be welcome back to DC any time!