A star was born yesterday afternoon, at least on this side of the Atlantic.

Alena Kovaleva, a member of the Bolshoi Ballet’s corps who joined the company directly after graduating from the Vaganova Ballet Academy in 2016 (last year!), assayed the lead ballerina role in Diamonds at the Lincoln Center Festival’s five-performance Jewels celebration yesterday afternoon, and delivered one of the finest portrayals I’ve seen. Ever. Remember the name: you’ll be seeing it, and her, again.

Kovaleva’s performance was so stunning, and so exhilarating, that it eclipsed all of the program’s other glittering focal points: the presence of three world-class companies dancing each of the ballet’s individual gems; the sparkling performances by Paris Opera Ballet’s Myriam Ould-Braham in Emeralds and by New York City Ballet in Rubies (led with dynamite pizazz by Megan Fairchild, Teresa Reichlen, and Joaquin De Luz); and of course the occasion of the 50th Anniversary celebration of Jewels itself. Kovaleva’s New York featured role debut was that dominating, and that good, and that important. 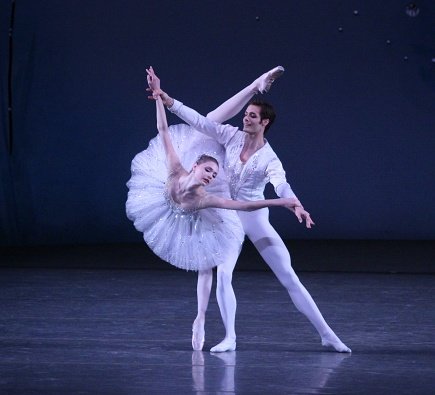 In the context of a review a few months ago, I wrote that if you want to see where a company is headed, go to a matinee. Yesterday afternoon’s program was yet another example. For this performance, the Bolshoi scheduled an unknown (to me) ballerina as the lead. That piqued my interest: leading roles at Lincoln Center are highly coveted at any time and particularly in a high-profile context such as this magnificently conceived (and, appropriately, highly publicized) LCF event, so I thought there had to be something special about this ballerina for Bolshoi’s artistic management to display her so prominently. On a much earlier occasion, I took a chance with another Bolshoi ballerina at the time unknown to me who was scheduled to dance Aurora at a matinee. In a performance I remember to this day, that “unknown” ballerina knocked my socks off. Her name was Ludmilla Semenyaka.

Kovaleva’s performance knocked my socks off too. And, from what I could discern, the rest of the audience was equally astonished, and equally won over – even critics who I usually see sitting on their hands or racing out of the theater while the rest of the audience stands and cheers were, for this performance’s curtain calls, standing with them. Granted that there are considerable differences, both qualitative and quantitative, between the demands of Aurora and those of the lead ballerina in Diamonds, but based on what Kovaleva showed yesterday, I wouldn’t bet against her success in any role. And you knew it from the instant she stepped onto the stage.

I’ll discuss Kovaleva’s performance in greater detail (as well as that of her partner, Jacopo Tissi, who also delivered a noteworthy New York debut) after I address other aspects of the celebration and the afternoon’s performance as a whole.

For this event, Jewels was given a “golden” setting within which to display its gems. The combined presence of NYCB, Paris Opera Ballet, and the Bolshoi, at the same theater where Jewels premiered (and also on the 50th Anniversary of the LCF itself), made the occasion of its golden anniversary celebration even more memorable than it otherwise would have been. The event couldn’t have been provided with a better display showcase. The only improvement (aside from more plebian-friendly ticket prices) might have been to schedule more performances with more and different casting combinations.

Jewels is generally considered to be the first full-length plotless ballet, but to me, that fact is not in the least indicative of its significance or the basis for its world-wide success. Indeed, it’s only “full-length” because its three component ballets, when presented on the same program (Rubies and Diamonds are often presented independently), are tied together both by what may be considered a continuing physical, visual, and emotional thread and by a tripartite sense of international historical styles – admittedly no small feat. But Jewels will stand the test of time not just because it’s the first evening-length plotless ballet, and not only because it’s so brilliantly crafted, and not at all because it’s a presentation of bodies moving abstractly to music, but because it’s alive with intelligent creativity, energy, and purpose; and because, plotless though it may be, it’s not without expression that is an attempt to convey “something,” even though that “something” may be elusive. That it’s plotless is almost irrelevant. 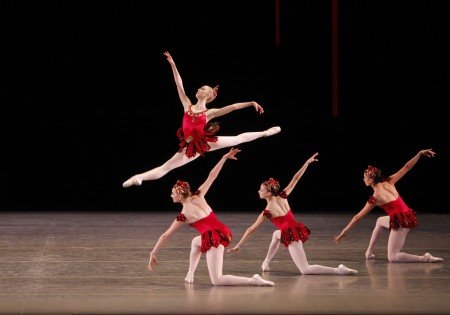 Emeralds is considered the weakest of the Jewels three gems, if only because the other two are so strong. The Paris Opera Ballet presentation Saturday afternoon looked quite different from recent performances I’ve seen of it at NYCB. The style, though similar of course, looked slightly off; less smoothly romantic. And where I often have had the sense in NYCB performances of it, rightly or wrongly, that it was being danced underwater (playing off the deep, enigmatic sense of the gem), here I had no sense of that at all. This performance’s locale was some woodland glade – not inappropriate for the French-focused style, but nothing particularly “emeraldy” about it beyond its dominant color.

Be that as it may, I was disappointed with the performance by the lead ballerina, Laetitia Pujol, whose pasted-on smile and exaggerated effervescence left me cold. Her partner, Mathieu Ganio, was too smiley as well, and cheated too much on his turns, though in other respects did a commendable job. Hannah O’Neill, Sae Eun Park, and Fabien Revillion executed the pas de trois (and their individual solos) quite well, if not particularly memorably. But Ould-Braham was the performance’s saving grace. Although she is an Etoile, I had not heard of her previously, but I’ll keep an eye out for her in the future. And her partner, Mathias Heymann, matched her in demeanor and compelling quality. 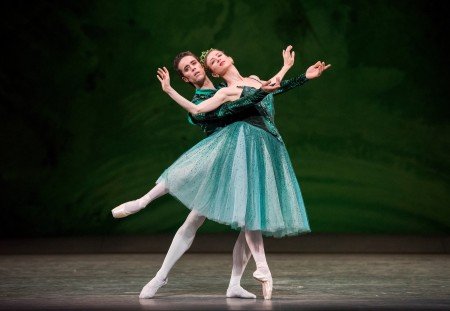 Ould-Braham presents, at least here, with an air of mystery that fit the role and the ballet’s ambiance perfectly. And her impeccable timing and crystalline execution were enchantingly irresistible to watch. I was certain that her performance would be the afternoon’s highlight.

And then came Rubies.

I’ve seen Fairchild, De Luz, and Reichlen dance Rubies before. Many times. I’d always found Reichlen to be impressive in her role, but didn’t recall being swept away by Fairchild and De Luz. As competent as both were and are, I felt Fairchild’s performances were not sufficiently exciting to be memorable, and that De Luz was much better on his own than as a partner. 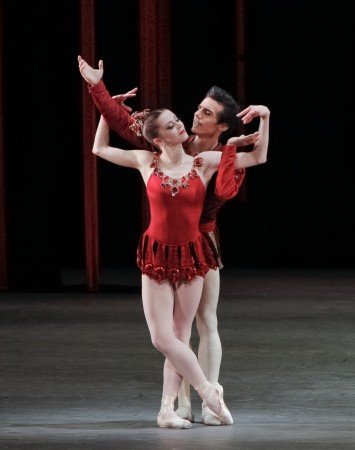 But whatever I found lacking in their previous portrayals was abundantly present yesterday afternoon. Both Fairchild and De Luz not only executed the choreography perfectly, but they were comfortable enough to play with it and have fun while they did, and their attitude was infectious. They, and the entire company, were nothing short of fabulous. This was the home team not only living up to expectations, but exceeding them. Their performance prompted deserved audience cheers, and I was certain that it would be the afternoon’s highlight.

And then came Diamonds.

My quarrel with many performances of Diamonds that I’ve seen over the years is that the ballerina, at least in the opening segments, can be too much Odette: the portrayal too tinged with sadness, or worse, exaggerated pathos. Sure there’s a built-in tinge of loss early on, but Diamonds, and the lead ballerina’s role in it, is more a celebration of what was (which later is shown to still be) than it is a mourning over a lost art or lost era. And I’ve often seen Diamonds overall presented too reverentially. Sure the ballet as a whole is supposed to be somewhat reverential, but as in “honoring” rather than “being bound by.”

And Kovaleva’s performance as the lead ballerina was delivered exactly as it’s supposed to be. Technically, there was nothing she did that to me wasn’t done flawlessly. And not “just” bare execution, but exquisite timing and phrasing. This Diamond dazzled. 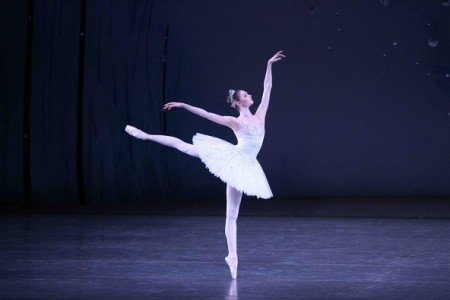 But Kovaleva’s performance was far more complete than can be described by technique alone. There’s a radiant serenity about her, evident immediately, that’s almost celestial in its tranquility and infinite promise, as well as a quality of warmth to her stage persona, at least in this role, that seems genuine. And, perhaps as a natural consequence of her age, she exudes a quality of youthfulness – angelically baby-faced and mildly sensual at the same time – that is both endearing and eye-opening. Here she was not so much a queen of Russian classicism as its princess. Watching her move is more than watching a soon-to-be prima ballerina; it’s watching a star aborning, as fresh and as portentous as a sunrise.

I feel a bit awkward about gushing so much about a ballerina I’d not previously seen or heard of, but her performance merits it. It was so perfect, even though I’m not certain that I know exactly what “perfect” is, and so moving, it brought tears to my eyes. Literally. Ok, I’m easy. But I wasn’t the only one in the audience teary-eyed. This was a very special performance, one that I felt fortunate to have witnessed. 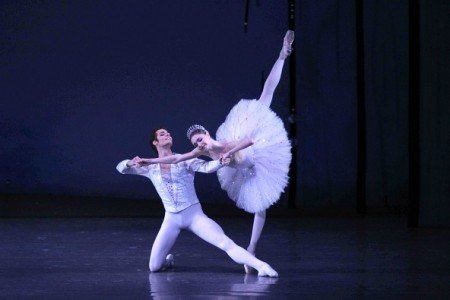 Kovaleva was partnered by another corps dancer, and if I focused more on danseurs than ballerinas, I might have begun this review focusing on him. Tissi’s performance was almost as memorable as Kovaleva’s, particularly for a danseur so young. On his own, his execution was impeccable. Soaring leaps; exemplary tours (no cheating) with clean landings in perfect fifth every time. And his partnering, with one exception, was impeccable as well. The exception: as the ballet concludes, there’s a moment when the ballerina is en pointe, her right arm at her side waiting for her partner to grasp her forearm/clenched fist and push her through a pirouette, but Kovaleva stood there for what seemed like seconds before Tissi reached for her arm. And when the phrase was repeated a second time, so was the delay. It wasn’t critical, and I suspect most didn’t notice it; it just made the transition a bit less seamless than it should have been. But that’s it – every other aspect of his performance was top notch. 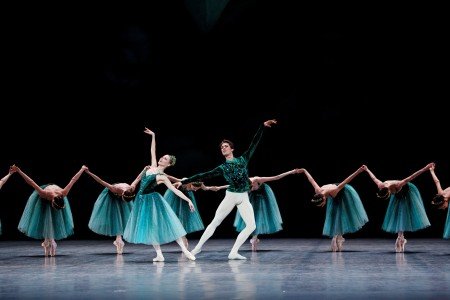 Ultimately, one might say that Balanchine’s genius, and Jewels itself, made the program as fine as it was. But as brilliant a choreographer as he was, and as brilliant a piece of work as Jewels is, it takes brilliant performances to make it all come alive. It got that yesterday afternoon from Ould-Braham and Heymann; Fairchild, Reichlen, and De Luz; and Kovaleva and Tissi. And as far as Kovaleva is concerned, she cannot return to New York soon enough. I need to see the full extent of her ability, and to watch her grow. If I could, I’d travel to Russia to do so. Frequently. This young ballerina couldn’t be more than 19 or 20. What enormous potential she has! I understand that she’s danced Myrta already, a role that doesn’t seem to be compatible with the stage personality she showed in Diamonds, but chameleon-like versatility is part of what makes a great ballerina great. Or she could come back as…Aurora. But whatever the role may be, I’ll look forward to seeing it.