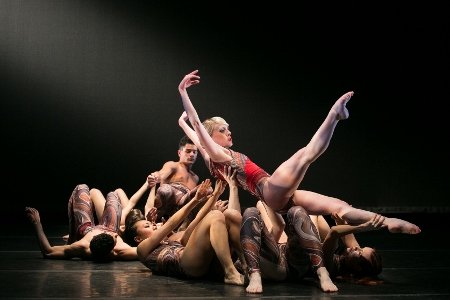 In an age where iconic dance companies such as Merce Cunningham, Trisha Brown and Martha Graham are closing doors or struggling to redefine themselves after the departure of their namesakes, it is remarkable that Elisa Monte Dance is not only celebrating its 35th year but poised to launch itself into the future. More evolution than revolution, their reconfiguration seems to be born through natural selection.

The number thirty-five may have a mystical aura, but this transition has substantive, solid roots. In fact, it seems that Tiffany Rea-Fisher was born to this role, though it wasn’t always that way. A principal dancer at EMD for six years, she was initially reluctant to audition for the company. “I was a fan of the company. I saw their Joyce season every year,” she said, but as a dancer who loved the physicality of dance, she did not see herself as a good fit for the company. “Elisa saw something in me that no other choreographer saw and she was able to tap into it — a softer, more regal and feminine side that I had never been asked to access.”

Tiffany Rea-Fisher, petite of frame, is a powerhouse in every sense of the word. From the very beginning, she liked working in the office as an adjunct to her role as performer. By 2008, four years into her dance career with EMD, she became increasingly involved in all operations, soliciting a three-year CASA grant from the city and launching an education initiative. At its conclusion, the executive board voted to keep her on in an administrative capacity. Monte continued to see something in her protégé, cultivating Rea-Fisher’s other natural abilities and eventually grooming her as her successor. 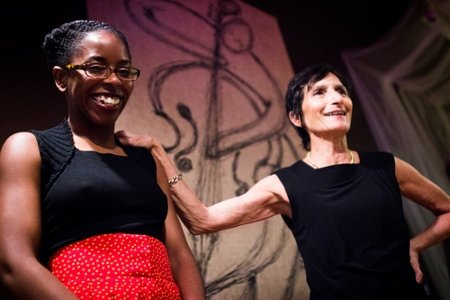 Elisa Monte, who made her professional debut at the age of ten dancing for Agnes de Mille, went on to become a principal dancer at Martha Graham Dance Company. Five years into her tenure there, in 1979, Martha Graham offered her dancers an opportunity to choreograph their own works in a company workshop. This was to be a defining moment in Elisa Monte’s career. Treading, a work created on fellow Graham dancer, David Brown, (later her partner and husband), established Elisa Monte as an innovative voice in the contemporary modern dance world, introducing audiences to what would become her signature style: a lyrical and passionate sensuousness, combined with controlled, intense athleticism. Shortly after, Monte was approached by Alvin Ailey and Treading became part of his company’s repertory. Around that same time, in 1981, Elisa Monte Dance was formed.

Tiffany Rea-Fisher, who joined EMD in 2004, was given a similar opportunity when Monte generously offered her own dancers a chance to present choreographic work. Rea-Fisher’s piece, a duet with her fellow dancer and husband, premiered as part of a longer work entitled Zydeco, Zare in the company’s 2005 Joyce program.

Rea-Fisher, like Monte, knew she wanted to continue to pursue a life in dance beyond performance but initially wasn’t interesting in choreographing. She viewed her piece as “a lovely opportunity and a full stop.” Elisa Monte, however, had other things in mind. She asked Rea-Fisher to choreograph pieces the next year and the year following as well. Once again, Monte continued to see something in her protégé that Rea-Fisher had not yet fully accessed.

Elisa Monte knew it was time to start stepping back nine years ago when she started to lose sleep. “When I was 35, things could be on the brink of disaster and I could put my head on the pillow and go right to sleep,” she recalls. Five years ago, Monte, a self-described planner, slowly started divorcing herself from the business details, “I don’t jump into the cold pool of water. I hate cold water.”

When Monte first mentioned that she might like Rea-Fisher to take over the company, Rea-Fisher was caught completely off guard. It was 2009. “I know exactly where I was. We were on the phone discussing the CASA grant. I was asking her about expanding the program and she was really quiet on the other end of the phone. Finally she said, ‘I think that’s fine but I want you to take over the company whenever I decide to retire. I said ‘What?’” Later, when they revisited the conversation, Monte told her that she would have to choreograph. Rea-Fisher’s instinct was “I would love to run the company for you but I just don’t know if I’m a choreographer.” 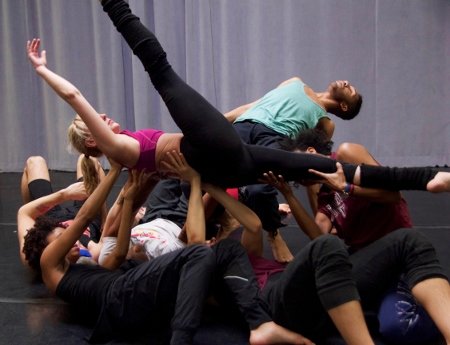 When Tiffany Rea-Fisher assumes the reins this year, she will have completed nine works total for EMD, two of which, Newton’s Cradle and Current, will premiere this Spring. Newton’s Cradle, a 12-dancer, full-company piece, Rea-Fisher’s largest cast to date, is based on Sir Isaac Newton’s device which examines the relationship between energy momentum and a series of swinging spheres. A choreographic study of action and reaction, there is a heart-stopping moment in which two dancers are entwined on the floor in exquisite arrangement. One by one, the other dancers carefully rearrange the intertwined limbs. It is a slow passage with subtly changing sculptural lines, an arresting counterpoint to the explosive phrases that populate the piece. Current, a solo piece created for company member Alrick Thomas, explores the disconnect in physical and digital worlds. Rea-Fisher’s most contemporary work to date, it is physical and structured, intentionally eliciting another side of a dancer inclined toward lyrical movement.

In dance, we admire a dancer’s strong “center.” Rea-Fisher is as centered a leader as she is a dancer. Poised, confident, in command, she knows what she likes and doesn’t like — instinctively, like her mentor. The company’s current staple of dancers, including four apprentices, were all hand-picked by her. Thomas Varvaro, a three-year company member and the most senior male dancer, describes EMD as “a family.”

Monte’s final choreographic piece as Artistic Director also scheduled to premiere this Spring, is a full-length work that will be presented in two acts. The piece, fittingly entitled Pangaea, takes its name from a supercontinent that assembled roughly 300 million years ago from earlier continental units and that, after 125 million years, began to break apart. The piece is still a work in progress. Part one, witnessed in the company’s rehearsal studio at Topaz Arts, involves dancers rolling toward and into one another, as though evolving, then pinwheeling outward in myriad spinning lifts. The tension between the individual and the group is demonstrated as individual dancers unroll from one another and then suddenly roll into groups once again, all the while seeming to seek out and to support one another. This in and out movement, at once physical and lyrical, accelerates to an almost desperate pitch before the first movement blackout. Artistically, the work is a pulling together of concepts and vocabulary from four Monte pieces. Metaphorically, Pangaea may represent Elisa Monte’s last word as Artistic Director of the company she created and nurtured.

Monte believes there is “a time to step aside; to let the next generation take it further and to take it on.” Monte will now have what she describes as her “ideal job.” As resident choreographer, she will “be free of the worries of the business.” She has implicit faith in the capabilities of her successor who, she notes “at this point, has done just about everything on her own.”

Rea-Fisher’s vision for Elisa Monte Dance is part legacy, part future. “I’m here because I want to be here. It’s because Elisa’s work is really incredible and I want it to stay in the conversation,” she said. “At the same time, it allows me a vehicle to pursue, choreographically, what I want to do and because I’ve been with the company for 12 years, I think it is a natural evolution.”

What are Monte’s expectations for Elisa Monte Dance under the direction of Tiffany Rea-Fisher? Her reply to that question was immediate and definitive: “They are going to take the world over.“

Going forward, Rea-Fisher expects the company will present a mix of her own choreography and that of Monte. “I can’t imagine a public show, especially a New York show, that wouldn’t have her work in it because it is the root of everything,” she said. In consideration is whether Monte’s signature piece, Treading, should be included on a consistent basis, as is the case with Ailey’s Revelations, but she’s allowing herself the flexibility to see how things evolve. “I don’t go into things half-cocked,” she said. “I’ve been thinking about this for seven years now, so now that it’s time, I feel ready.” But, she notes, “I’m going to be here for 35 years, I have time.”