I was aware in advance of its Kennedy Center debut that Chicago-based dance theater company Lucky Plush Productions, recipient of a 2016 MacArthur Award for Creative and Effective Institutions, is known for “thinky” works. Rooming House, co-created and co-directed by founder and Artistic Director Julia Rhoads and Leslie Buxbaum Danzig, with choreography by Rhoads, and collaborative input from the charismatic six member ensemble (Kara Brody, Michel Rodriguez Cintra, Elizabeth Luse, Rodolfo Sánchez Sarracino, A. Rahiem White and Meghann Rose Wilkinson), falls into this category. Rooming House takes place as a lengthy conversation (about 75 minutes). The casually attired company members (costumes by Patrick Burns) talk a lot, dance a little less than I’d hoped, and act as guides through a series of intellectual exercises that become physical exercises depicted on stage. 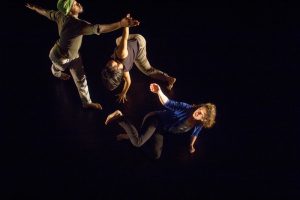 Rooming House is unlike anything I’ve seen before, and it’s hard to describe. It leans more toward theater than dance. However, I wouldn’t call it a play, even though there’s a ton of dialogue. Rooming House comes across more like eavesdropping at a diverse party on a college campus. You’re exposed to multiple people talking about deep, weighty ideas. Sometimes you can follow what’s said, and sometimes you can’t. Sometimes you’re curious about the content of the conversation, and sometimes you’re lost and/or bored.

The question around which Rooming House revolves is “What makes a person do something that could have life-changing consequences?” Many possibilities are shared via many meandering tales. Lucky Plush’s ensemble swaps stories with each other, and they also swap moves. The myth of Orpheus and Eurydice and the classic detective board game Clue feature prominently. And there’s humor and heartbreak included. Company members, inspired by wondering why Orpheus looked back at Eurydice despite being warned not to do so, pair off in duets during which they comically try not to look at each other. Later, Cuban-born Cintra enacts a seizure by impressively tossing himself up from the ground like a flopping fish gasping for air. Fellow Cuban-born artist Sarracino tells of his painful decision to come to the United States, leaving his mother behind, not knowing if he would ever see her again. 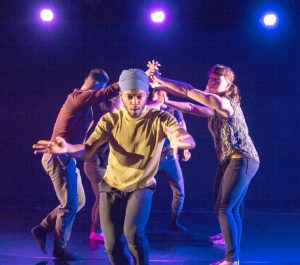 There’s a restlessness to the work. The storytelling lurches forward and backward between a jumble of big ideas. Themes of sacrifice, love, regret, and shared humanity emerge. Dancing, of course, is but one of the storytelling languages used in Rooming House. Spoken word, including more than a smattering of untranslated Spanish, and the original music by Michael Caskey are additional languages. Even the various “rooms” on the stage, explained by the dancers and demarcated by Alexander Ridgers’s lighting design, add layers of meaning to the performance. (My favorite room is the “backstory” room).

I applaud the creativity of Rooming House and the ability of the company to keep the storytelling going. I also applaud the desire of its creators to challenge the audience. Yet I, at least, was over-challenged. For me, there was too much to absorb. While I enjoyed contemplating the issues raised and the problems posed, the constant barrage of questions and the incessant twists and turns in direction exhausted me. Had the choreography stood out, I might have stayed reliably engaged, but for the most part the dancing is fairly pedestrian and unremarkable. This is probably by design, so that no one aspect of the performance overshadows another. Understandably, the conversation as a whole takes precedence. 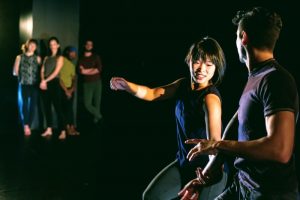 I naively expected Rooming House, which is organized as a kind of puzzle, to neatly wrap up everything in the end, but the responsibility for figuring out the answers is left up to the viewer. I was weary from the journey, and I walked away confused, a little disappointed, and full of further questions. It’s ok not to completely “get” Rooming House, I just wish I had.