Russell Maliphant began his career with Sadlers Wells Royal Ballet, but was attracted to the world of contemporary dance and performed with leading companies such as DV8, Michael Clark, Rosemary Butcher and Laurie Booth. In 1996, he founded his own company and created works with a mix of elements including capoeira and an attention to port de bras, resulting in some of the most beautiful contemporary dance I have seen. The early works were performed in small venues such as The Place, but were much in demand both in the UK and Continental Europe. Then Maliphant worked with the Ballet Boyz and Sylvie Guillem and his work appeared at the Royal Opera House and the Coliseum, one of the largest theatres in London. For the current programme, Maliphant is back in a small venue – the atmospheric retro Coronet Printroom, reborn from an old cinema – with a selection of solos and a duet, spanning the past 20 years and performed by the original artists with lighting designs by long-time collaborator, Michaels Hulls. This was an ideal venue to see these chamber works again. 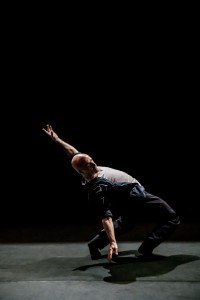 Two, a short work from 1997, was created on his partner, Dana Fouras. It has become a signature piece with a range of variations created for a variety of dancers and companies. For the Printroom, Maliphant has returned to the original version with Fouras – it remains a “killer” piece. Two opens in a top lit square of light with Fouras moving slowly on the spot, her arms creating serpentine coils. As the sound-scape by Andy Cowton speeds up, her elbows slowly sweep across her body and head and Fouras begins to step around the central spot. Finally, the pace accelerates to high speed and the lighting transforms to leave the dancer in semi-darkness, surrounded by a hollow cone of light, her rapid arm movements cutting through to the light in electrifying movement. Fouras looks better than ever and afterwards she told me that teaching Two to so many dancers had increased her understanding of the work. Although restricted to a small area she commands the space with supreme confidence – as exciting a performance as you could wish for. 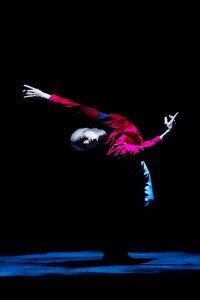 Afterlight (Part One), set to Erik Satie’s Les Gnossiennes 1-4, dates from 2009 and was created for the Spirit of Diaghilev programme at Sadler’s Wells. As in Two, Daniel Proietto also begins in a pool of light, moving on the spot weaving shapes with elegant arms while slowly turning. But the contrast in mood could not be greater: confidence replaced by the puzzlement and melancholy of a sanatorium inmate. Proietto, a fine, sensuous dancer, recreates some of the familiar images of Nijinski and in the second movement, moves around the stage and over the floor in a seemingly effortless display of elegant dance. But in the third section, anxiety and despair come to the fore in more jagged movement. Finally, Proietto returns to his original spot and as the light contracts around him we have a sense of life shutting down. This award winning work retains all its beauty and emotional charge. 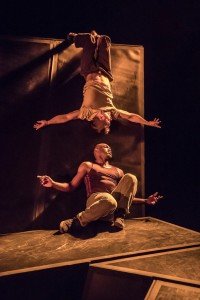 The evening opens with The Wall duet, one of the highlights of the evening length The Rodin Project of 2012. The set by E. S. Devlin and Bronia Housman features a vertical wall with sloping surfaces at the base. As the lights come up we see Tommy Franzen at the top and Dickson Mbi below. Both dancers are from the hip hop world and Maliphant makes fascinating use of their upper body strength as they swing around the surfaces with deceptive ease. Franzen has an air of anxiety while Mbi is more assured. Initially they explore the space separately while watching each other, but eventually they come together with spectacular lifts including one where Mbi supports an upended Franzen against the wall. The grace and power of the two dancers recreating shapes from Rodin’s figures, set to music by Alexander Zekke makes a distinctive contribution to the evening.

Maliphant hoped to present a second duet with another artist, but injury meant Maliphant performed a solo from 2002, One part II. Maliphant’s style is perfectly suited to Bach’s piano music played and hummed by Glenn Gould. The intricacies of the dancer’s arms combined with back bends, spins and floor movements seem to spring directly from the baroque music. Michael Hull’s subtle lighting delineates the movement without ever distracting.

Overall this was an evening to savour – I enjoyed it so much I went twice.