Print Room at the Coronet
London

Following last year’s successful season, Russell Maliphant returned to the Print Room at the Coronet for malipantworks2. In this programme the focus was on duets, always a strong suit in Maliphant’s hand, with the retro intimacy of the Print Room providing an atmospheric setting. The four duets, ranging from nine to fifteen minutes in length, were presented in chronological order and while displaying many of the choreographer’s tropes were satisfyingly contrasted. 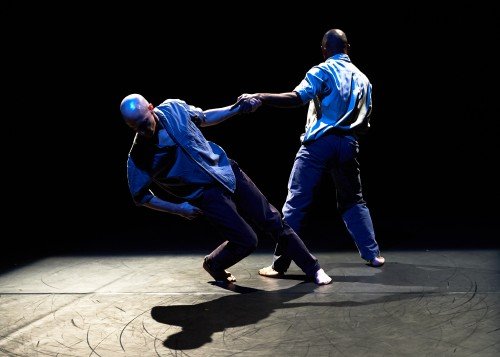 Critical Mass dates from 1998 and was later picked up by the Ballet Boyz, who from the start of their company tapped into the rich vein of Maliphant’s work, initially for two male dancers and then with ensemble commissions. For this performance Maliphant was joined by Dickson Mbi and initially the two dancers looked and walked around the space before coming together. Alongside each other almost throughout, they executed a series of variations on basic elements including arms swinging individually, then together, pointing like arrows, giving weight as seen in the photo, and Mbi’s body bending back across Maliphant. The tension mounted as the complexities grew with slow and then abrupt motion and Maliphant’s innate elegance set against Mbi’s power. 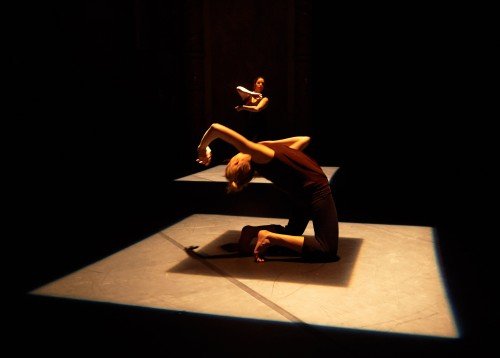 Two times Two is a duet from 2002, developed from a solo originally created on Dana Fouras, Maliphant’s partner, and seen at last year’s Print Room visit. I have admired the solo version for twenty years and the company’s manager wasn’t wrong when she described it as “our killer piece”. On various sightings of the duet version over the years I wasn’t convinced that much value was added, but here it worked a treat. Two times Two opened with Fouras slowly exploring a small illuminated square with stretches and elbows sweeping slowly across her body amid bends and twists and after a couple of minutes a second square is visible with Grace Jabbari making similar movements but from the floor. The pair continue, never leaving their sharply defined areas, sometimes in unison, sometimes in canon with the firm precision of Fouras set against the softer arms of Jabbari. As the pace accelerates, the frames of light take on a square of darkness at the centre so that rapid swinging arm movements cut like firebrands through the illuminated space with their bodies in near darkness. The climax with Michael Hull’s lighting genius, Andy Cowton’s sonar soundscape, Maliphant’s electrifying choreography and the skill of the dancers makes for one of the most thrilling dance experiences around.

In the Print Room’s studio theatre we saw a loop film, Other, a collaboration between Tim Etchells, Hugo Glendinning and Maliphant, with slow motion video of waves crashing and tumbling onto a beach in West Cork, Ireland. Maliphant and Fouras stagger around in the water, almost in a parody of the tight control they show in the theatre. I could see little development in the ten minute film and wondered if the dancers added value to the beautiful wave patterns.

Still, from 2013 is anything but still and features video projections of ever moving bar code like patterns on the floor and the dancers. The effect is mesmerising, especially on Dickson Mbi’s body, stripped to the waist. Armand Amar’s score reminds me of the war drummers of Burundi, starting slowly and accelerating to a deafening crescendo, before returning to the slow beginning. Mbi is a man in conflict and the extraordinary power and precision of this dancer as he paced, crouched and threw himself around the mottled space, impressed me immensely. After ten minutes, it still remained a solo and I wondered about the term “duet”. However, Mbi is then joined for the final five minutes by Grace Jabbari, but I found it a wrench after this time to accommodate a second dancer and Jabbari’s grace, which worked very well with Fouras, seemed less effective alongside Mbi. Nevertheless, the unison finale is powerful with Hull’s lighting again focusing on the dancers’ swinging arms. 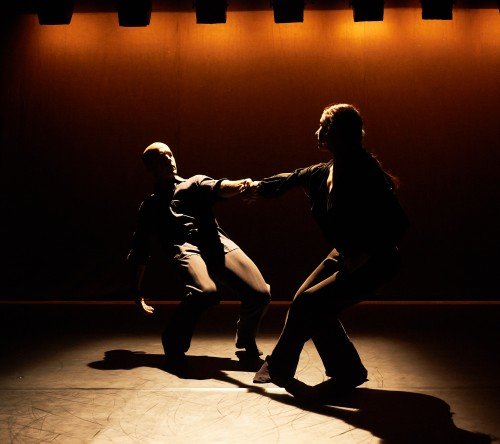 For the final duet, as Monty Python would say, “And now for something completely different.” Maliphant has created a new duet for Fouras and himself to music including a scratchy recording of Donizetti sung by Caruso. At a regal pace they move with and around each other employing exquisite ballet ports de bras and subtly displaying their confidence and knowledge of each other after half a lifetime together. The final stages see some fascinating lifts and cartwheels over Maliphant’s back. An added bonus is Hull’s lighting, projecting shadows onto the faded walls and columns of the Print Room.

Maliphant has shown that his golden oldies remain impressive and he continues on a creative high. The audience showed their appreciation and like me many probably wished we could have had an encore of the full programme.

Sylvie Guillem: A Life in Progress

English National Ballet: Lest We Forget