The name alone signifies performing excellence. But to anyone who has had the pleasure of watching him perform (Gomes doesn’t “just” dance, he performs), witnessing him emerge as a choreographer, listening to him speak, or interviewing him knows that Gomes’s excellence goes far beyond performing. If anyone in ballet today can be said to be an ambassador for the art, it’s Gomes.

Tuesday night, Marcelo celebrated his 20th Anniversary with American Ballet Theatre, partnering Stella Abrera in a performance of Giselle at the Met. It was considerably more than the glorious performance it was. 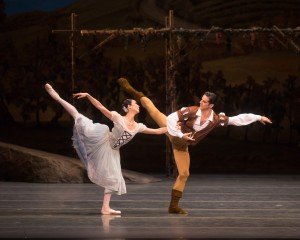 When I first started writing reviews, I referred to dancers by their first names, which most balletgoers (at least in New York) routinely do even if they’ve never met them. I was soon advised that this was not a professional thing to do. But in this review, Marcelo will be Marcelo. That’s the only name anyone needs to hear to know instantly whom you’re talking about.

In order to understand why Marcelo is as popular as he is, and as important as he is to ballet, one must recognize one quality, among many, that distinguishes him from most other danseurs. When I interviewed him several years ago, a single word kept emerging: early on in his training, he had learned the importance of being “humble.”

It soon became clear to me that Marcelo’s understanding of the word’s meaning was different from the sense in which it’s often used – someone who does something extraordinary, but when asked about it, stoops his shoulders, holds his head down, and almost under his breath says: “Aw shucks. ‘Tweren’t nothin’.” To Marcelo, it’s not so much self-effacement as putting the interests of others – his ballerina, his audience, his company – above his own. It’s what his idol Julio Bocca routinely did. And it’s what Marcelo routinely does.

And it’s most clearly manifested in his partnering. Marcelo learned early on that “presenting the ballerina” was his, and any danseur’s, most important job. Ever since I first saw him dance, that’s what he does better than anyone else. He gets that when she looks good, he looks good, and the entire performance looks good. And it’s why ballerinas fight over him. He allows them to be free. His partnership with Diana Vishneva, although not a “formal” one (like Fonteyn/Nureyev), is an example of why that’s so. [And it’s a partnership that is deservedly legendary.] During her last Juliet with ABT, in the Balcony Scene, at one point she ran toward him from downstage left to upstage right at full gallop and threw herself at him. It’s in MacMillan’s choreography. But I’d never previously seen it done with such utter abandon, with the confidence that he could handle it and make her look passionate rather than like a wrecking ball. Of course he did.

Beyond that, he’s not full of himself. Marcelo doesn’t need to do tricks; to show off. He just needs to do it right, which he always does. So you won’t see Marcelo spiraling like a tornado, or throwing unnecessary acrobatics into his leaps. The embellishments come from his pristine execution of the style and his finely tuned characterizations.

And beyond that…he has real fun out there. Marcelo’s at that point in his career where he doesn’t have to prove anything to anyone. So in addition to doing what he’s supposed to do, he adds idiosyncrasies that illustrate his good nature; his humor; and his joy at being on stage — all with a mischievous twinkle in his eye. Like when he concocted a special sequence to surprise the audience for Nina Ananiashvili’s farewell ABT Swan Lake in 2009 [instead of moving downstage toward Siegfried (Angel Corella) at the end of the Black Swan pas de deux, she moved to Rothbart (Gomes), who promptly tossed her to Corella – and the audience roared.] Like oohing and aahing the views like a princely tourist as he and the Lilac Fairy searched for his sleeping Aurora. Like Tuesday night, when, during the Act I harvest festivities, he calmly stopped and sampled a grape. These are throwaways, and Marcelo throws away more nuances than most dancers add to their performances to make them their own. He does it because he’s confident enough to have fun with it, and, for those in the audience paying attention and who know to be on the lookout for a “Gomesism,” the fun is contagious.

He does all this with no loss of pure and simple brilliance, which was evident in Tuesday night’s performance – both by Marcelo, and by Abrera. 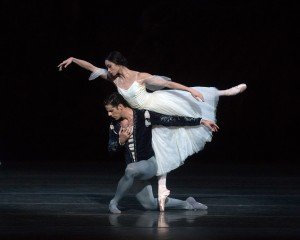 Abrera’s unexpected debut as Giselle two years ago was not just a triumph for her on its own merits, which it was, but also evidence, as if any were needed, that ABT’s languishing soloists could do the job very nicely, and that there was no need for year after year of guest artists filling scheduling holes that should have gone to the company’s own dancers. As anyone who’s attended ABT’s performances so far this season knows, that’s been proven true.

But besides that, Abrera has grown as an artist in the past two years. Evidenced by this Giselle, her confidence seems boundless, and it looks like she’s enjoying the moment – every moment. She’s comfortable enough now to add nuance after nuance to make the role her own, and she delivered a Giselle of uncommon clarity and individuality. For example, I don’t recall anyone being so physically in love with and dependent for support on her Albrecht. She doesn’t just lean toward him at appropriate moments during Act I, she leans on him, resting her head against his head, neck, or shoulder, and the physical display generally adds dimensional depth to her commitment to him, and her ultimate despair and loss. It didn’t always work – as her mother (neatly played, as usual, by Susan Jones) was miming her harrowing story of wilis that go bump in the night, Abrera was nuzzling against Marcelo, paying more attention to him than her mother. This was the only false note, however, in an otherwise model performance. And her “mad scene” was idiosyncratic, but it worked well. I don’t know how she did it (this was before Act II make-up would have been added to make her look more pale), but her face turned bleach white as she turned toward the audience – she literally became immediately transformed not just into a foreshadowed spirit, but at least facially, into an actual “physical” one. And her Act II was danced with extraordinary stylistic precision.

The performance was abetted as well by superb execution by Christine Shevchenko as Myrta, and in the smooth as silk Peasant Pas de Deux by Cassandra Trenary (sweetly crystalline) and Blaine Hoven (nailing every landing). Impossible as it seems, all three improved from their debut performances Saturday afternoon. And as he did last Saturday evening, Thomas Forster delivered a fine, albeit brutish looking, Hilarion (not at all an unusual interpretation, but very well executed). 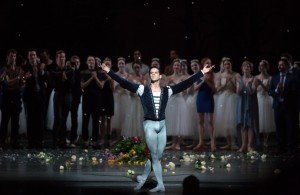 When the curtain rose on Gomes and Abrera following Act II’s conclusion, the full house thundered, and the celebration of Marcelo’s 20th anniversary with the company began. As the cast assembled behind him applauded, Marcelo was gifted with single roses and flower garlands by ABT’s principals and senior artistic staff, confetti fell from the stage rafters, and the standing audience wouldn’t let him go. At one point, other male dancers lifted him and hurled him skyward as if he was being bounced on a trampoline.

Through it all Marcelo demonstrated that unaffected quality of being humble. At every possible moment, he would attempt to include the cast in the celebration not as celebrants, but as performers deserving of accolades themselves. He’d motion them forward to take bows with him, turn and applaud them, try to get Abrera to join him (which she graciously refused to do – it was his show), and even though he had to know it was going to happen, he looked legitimately surprised…and humbled…by the overwhelming adulation.

Marcelo has one additional personal quality I haven’t yet mentioned that everyone recognizes just by watching him dance or hearing him speak, which was evident during these festivities as well. He’s not only a danseur for all seasons. He’s a terrifically talented, terrifically respected, mensch.

In the course of my review of the May 18 and 19, 2010 ABT performances of La Bayadere, in which Marcelo danced Solor both nights, I discussed how essential I believed he was to the company, and concluded that Marcelo was the most valuable dancer on ABT’s roster. He was then, continued to be in the years thereafter, and still is.