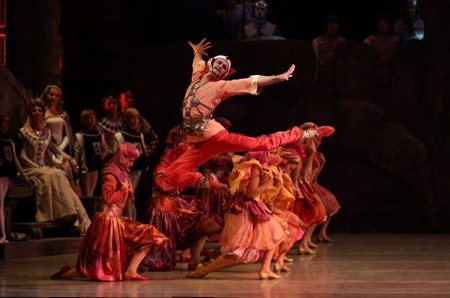 One is always transported by the beauty and technique of the Mariinsky Ballet’s dancers.  Seeing the company perform Raymonda is a treat, and also a bit of an endurance test, as the ballet consists of three acts and is over three hours long.  Raymonda is among many classical ballets that are more a means of showing the depth and impeccable training of a large ballet company than a vehicle for a worthwhile and compelling story.  Forget the story, because it’s not important.  To the contrary, it’s a tiresome tale of a rescued maiden, an evil Saracen, a brave knight, a sword fight, and a castle wedding with a bunch of colorful ethnic guests.

The way to enjoy this piece of ballet history choreographed by Marius Petipa, and revised by Konstantin Sergeyev with choreographic fragments by Fyodor Lopukhov, is to sit back and simply take in all of the loveliness.  Alexanders Glazunov’s music is pleasant enough.  The costumes (revised by Elena Zaitseva after Simon Virsaldze) and set design (by Virsaladze) highlight hues from of old tapestries – lots of rusts and pinks and tans, with a smattering of glitter and gold.  Together it’s as pretty as a picture, and the dancers are as lithe and elegant as expected.  During a few long intervals with no dancing, while the orchestra plays on and on, go ahead and be lulled, because the dancing will wake you up again.

Dark haired, reed-like Oxana Skorik as Raymonda makes her role look easy.  She dances with precision and panache.  Skorik takes her time and uses her entire body to express Raymonda’s fears and celebrations.  When she is lifted with her chest up and her legs bent behind her, she looks like she could truly take flight.  She’s wispy but strong.  Skorik masters both frothy and light as well as sharp and aggressive.  It’s impressive to see her range.

The whole production makes one’s heart beat a little faster.  There are plenty of tutus, intricate and challenging footwork, cute children, and dazzling feats of athleticism and artistry combined.  Rather than the silly story, it’s the talent and atmosphere that make the Mariisnky’s Raymonda appealing.  Yes, Raymonda is to a significant extent formulaic, but fans of classical ballet pine for this sort of formula when it’s presented by so fine a company.  This Raymonda is the stuff of dreams, even if the dream sequence in Act I feels extremely drawn out and puzzling.  Again, forget the story.  The key to getting a thrill out of this performance of Raymonda is concentrating not on the outdated narrative but on the exemplary dancers of the Mariinsky Ballet.  More than one little girl from the audience could be seen twirling about during intermission, clearly feeling inspired.