Le Corsaire isn’t among my favorite of the classical story ballets (I’m not into kidnapping, sexual assault, slavery, and distasteful cultural caricatures), but I would jump at the chance to see anything the Mariinsky Ballet performs. Their recent production of Le Corsaire at the Kennedy Center was nothing short of spectacular. Normally, I find getting through three acts of any ballet a challenge on a weeknight after a long day at the office. Not so this time. I was captivated from the beginning and remained that way the whole time. Starting with the huge billowy blue waves and slanted rain of the prologue and ending with the pirate ship happily sailing off in the epilogue, excitement reigned.

I have to give credit to everyone who had a hand in Le Corsaire, because each detail added up to perfection. Nothing disappointed me. To the contrary, Le Corsaire was astonishingly grand, like an over-the-top dream. The opulent costumes, the vibrant music, the striking sets, and the exuberant dancing made me want to rub my eyes in disbelief. Seeing Le Corsaire in all of its splendor, I understood more deeply why the Russians flock to see ballets in such big numbers. When ballets are performed at this level, it’s simply thrilling. Instead of being passively pretty or pleasant, watching the Mariinsky’s Le Corsaire felt active, more like being a fan at a sporting event or on an amusement park ride, except with top notch artistry to match the constant anticipation and leaps of the heart.

Under normal circumstances, Le Corsaire isn’t a terribly engaging story, but the Mariinsky’s dancers breathed magic into every moment. Rather than seeming like the silly old story it is, this Le Corsaire pulsed with surprising liveliness, and I actually felt invested in what took place. Although they made it look easy, the dancers must have worked very hard to achieve the exhilarating and stunningly smooth performances they gave. The pantomime was lively and clear and well integrated so that the story efficiently flowed. In particular, Soslan Kulaev as Seid Pasha pointedly entertained, expertly turning himself into both a creepy villain and a buffoon.

The entire opening night cast impressed, especially 18-year-old rising star and first soloist Maria Khoreva as Medora and principal dancer Kimin Kim who reprised his first role with the company as the slave, Ali. Their dancing defied gravity. Kim launched so high, so gracefully, and with such prowess, that he seemed inhuman. And Khoreva, too, seemed to go beyond the bounds of humanity as she speedily spun around and around, tight and upright and beaming, or was swept up and lifted, light as a feather, toward impossibly elevated heights. Together their physical mastery and artistic excellence astounded. 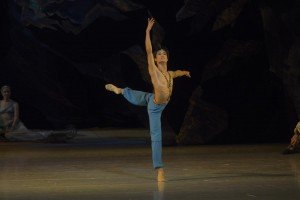 I surely witnessed an important piece of history as Khoreva, fresh and eager, delivered such a solid and inspiring performance in her first lead role in a full length ballet in the United States. Khoreva’s legs flew up to her nose and the back of her head like they were pulled with invisible strings. Her back pliantly curved, her feet crisply arched, and her elastic limbs stretched on forever. Khoreva is excruciatingly thin, however, and I found myself appreciating her more when her mid-section was covered versus when I saw her ribs noticeably protruding beneath her bare skin in Act I’s bikini top costume. Remarkably, despite her tiny physique, she also boasts incredible strength and unflagging energy. It was definitely an opening night to remember.

Comparisons to Diana Vishneva, in whose footsteps Khoreva follows at the Mariisnky, may not be far off. I caught a glimpse of a knowing, self-assured smile that reminded me very much of Vishneva, and I suspect Khoreva’s young career is headed for the same kind of acclaim. While Khoreva is exceptionally good now, she has room to grow and improve. She could add more depth to her performance and also a little more abandon. I feel certain that will happen over time as she matures and takes on new roles. Without a doubt, I expect to see Khoreva soar even higher. She already enjoys tremendous popularity as a darling of Instagram. I can only imagine that Khoreva will continue to gain admirers as she’s given additional opportunities to show off and expand her talent. 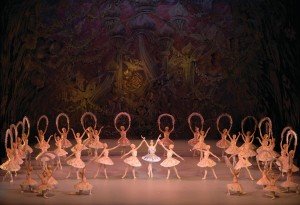 The Mariinsky Ballet in Le Corsaire, photo by Valentin Baranovsky

The kind of ballet Khoreva and Kim exemplify is the kind that keeps the Russians cheering and coming back for more. (There were plenty of Russian language speakers in attendance, as always happens when a Russian ballet company comes to DC. Interestingly, Supreme Court Justice Samuel Alito and his wife were present, too.) The audience went wild with applause for Le Corsaire. Like at a rock concert, cell phones came out flashing during the curtain call and audience members squealed with joy. This is what great ballet can be!