It was a refreshing change of pace for the Mariinsky Ballet to skip doing a favorite classic this year for its annual Kennedy Center season and perform a much lesser-known ballet, The Little Humpbacked Horse. This production, choreographed by Alexei Ratmansky, premiered at the Mariinsky Theatre in 2009, and it’s inspired by a Russian tale. This choice to veer away from the likes of Giselle and Swan Lake, however, seemed to have resulted in a dip in ticket sales. Perhaps American audiences are less willing to take a chance on a contemporary ballet version of an unfamiliar story? So, did those who stayed at home miss something special?  Yes, and no.

The Little Humpbacked Horse didn’t really appeal to me, but I did appreciate seeing the Mariinsky’s top-notch dancers stretched in new and different ways. For example, their acting skills are called upon strongly, and the contemporary choreography demands that they loosen up a bit. The ballet has many comic moments, and it turns out that as impeccable as the dancers are technically, they also have great theatrical range. The acting was superb on opening night. 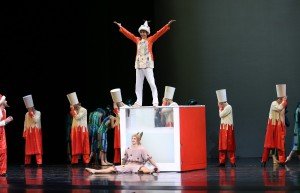 Vladimir Shklyarov, as the ballet’s star Ivan the Fool, could not have been more charming and compelling. His glorious leaps and effortless turns as well as his exceptional expression made the performance worth watching. The Tsar (Dmitry Pykhachov), The Tsar Maiden (Anastasia Matvienko), and The Little Humpbacked Horse (Yaroslav Baibordin) stood out for their robust entertaining portrayals, too. Pykhachov shone in his comic timing. Matvienko was effervescent when she sprang up and down on her toes. And Baibordin almost eclipsed Shklyarov in his buoyancy. What a lovable little equine hero he was (although I found the position of his hands more cat-like than horse-like). Yet the cartoonish aspects of the characters grated on my nerves. If you like a lot of pantomime, and you enjoy Three Stooges-type antics, this ballet may be for you.

Even aside from the characters, the entire ballet has a cartoonish feel to it, particularly the bold set and costume design by Maxim Isaev. The colors in The Little Humpbacked Horse, except for the costume of the title character, are remarkably striking and bright — so bright, in fact, that you may wish to shade your eyes! Other costumes accoutrements make you want to laugh — especially the exaggeratedly long beards; the Horses, which reminded me of Elvis Presley with bell-bottomed jumpsuits and pompadour hairstyles with long ponytails down the back; and the Fire Birds, whose flame-colored hair sticks up like that of a troll or the Heat Miser from the Rudolph the Red-Nosed Reindeer movie. The sets consist mainly of simple shapes in primary colors, sort of like giant building blocks from a kindergarten classroom. Children would probably be drawn to this ballet. Indeed, The Little Humpbacked Horse strikes me as overly juvenile. While the ballet is forgivably fanciful, it crosses the line into clownishness too many times for my taste. 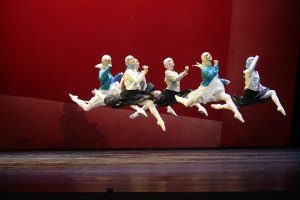 Coming on the heels of a Presidential inauguration, with a lot of turmoil and tension in the nation’s capital, this ballet provided some welcome comic relief, yet I admit feeling a tad guilty for having indulged in such a silly escape during such serious times. I had fun recognizing parallels between The Tsar and America’s newly elected leader. The Tsar is tended to and spoiled by a crowd of nurses who tickle him and feed him by hand. He behaves like a toddler, demanding things (like a pretty woman) and then throwing fits when he fails to get his way. Finally, he stupidly leaps into a vat of boiling water, resulting in his demise. Could this be a Trump ballet? 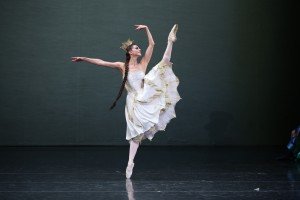 Anastasia Matvienko of the Mariinsky Ballet as the Tsar-Maiden in Alexei Ratmansky’s The Little Humpbacked Horse, photo @ Natasha Razina

I was thankful, as always, to see such beautiful dancers, whose technical ability. did not disappoint me. They were as precise and skilled as ever. The depth of talent of this company is truly astounding. Nonetheless, The Little Humpbacked Horse doesn’t conjure the same depth of feeling I usually experience seeing the Mariinsky Ballet. Ratmansky’s choreography here has a frivolous air that just isn’t my cup of tea.