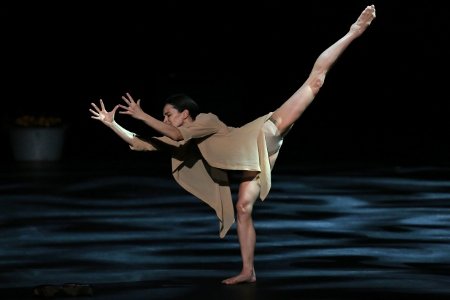 Program C: Diana Vishneva in Carmen Suite and Woman in a Room
Program D: Ulyana Lopatkina and colleagues in a gala evening

What becomes a legend (or two of them) most?

The thought crossed my mind while seeing legendary Mariinsky ballerinas Diana Vishneva and Ulyana Lopatkina headline programs at the Brooklyn Academy of Music collectively billed as a Tribute to Maya Plisetskaya. Certainly legends are not enhanced by appearing in ballets that appear dated or choreographically inferior, nor by appearing in selections from larger pieces that preclude demonstrating anything more than extraordinary technique. The two Mariinsky programs I saw included pieces that fit these descriptions.

That having been said, one evening featured a remarkable performance by a remarkable ballerina in a relatively unremarkable dance, and the abundant technique on display in the second evening more than compensated for the rat-a-tat-tat of largely disembodied excerpts. And notwithstanding my initial criticism, seeing these two legendary ballerinas in anything was worth the trek to Brooklyn.

I never saw Plisetskaya dance Carmen Suite, but it reportedly was one of her finest non-classical roles. For its time and in context, it must have been a shocking creation. [I did see Plisetskaya in Bejart’s Bolero, and can imagine, from that performance, what her Carmen must have looked like to a live audience.] A dancer of unmatched intensity, Plisetskaya could come across concurrently sensual and ice cold. Although Vishneva certainly can convey the requisite sensuality for a role like Carmen, I’ve never seen her come across icy in anything. She has a warm stage persona that leaps across the fourth wall and transports one to the stage to share the moment with her. Sure she can handle seduction, and she easily conquered the technical demands of the role, but – perhaps a product of my own prejudice – I couldn’t believe her as a calculating, cold-blooded bitch.

But there’s a larger problem here – and perhaps one that undermined Vishneva’s characterization: the ballet itself looks dated, and as a matter of artistic choice allows for little, if any, character development, whether by Vishneva or anyone else. 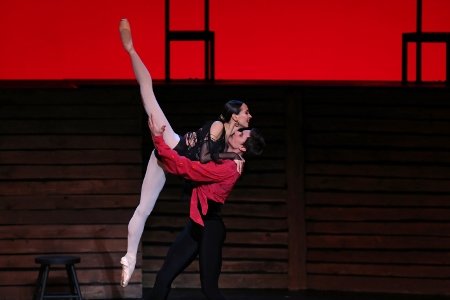 Choreographed in 1967 by Alberto Alonso to music by Rodion Shchedrin (Plisetskaya’s husband) after Georges Bizet, Carmen Suite was created for Plisetskaya. Indeed, the ballet was the product of years of Plisetskaya’s lobbying for the creation of a ballet based on Carmen, precisely because it would be a perfect role for her. But in fifty years, lots of dramatic ballet has come down the pike, and Carmen Suite’s stylized imagery and artificial theatricality now appears forced and unnatural – particularly incompatible with Vishneva, who never comes across as anything but natural.

The initial stark scene in an ersatz bullring with male mannequin-like figures gazing in unemotional contemplation at the developing inferno beneath them is quite extraordinary, but when the characters start interacting, it’s largely downhill from there. The audience presumably knows the story, but the dancers only enact bits and pieces of it with evolving characterization rendered superfluous. Allegiances and events change without apparent reason: events critical to the narrative just happen without transition. Vishneva had no alternative but to play the part without any emotional development, because the piece allows for none. There may be layers of depth to be revealed in the portrayal of a serial man-eater, but this Carmen is one-dimensional.

In 2000, Carolyn Carlson, a Californian by birth who emigrated to France in 1971 and eventually became a highly respected European-based choreographer, created a piece called Man in a Room for Tero Saarinen and his Company (performed by Saarinen himself). I’ve not seen it, but my understanding is that it’s a minimalist piece that visualizes an artist’s descent into madness. In 2013, Carlson re-imagined the piece for Vishneva as Woman in a Room. Had I known this background before I saw Saturday’s performance, it would have saved me a lot of time trying to figure out what Carlson was trying to do here, but my evaluation of the dance would have been the same.

Woman in a Room opens with Vishneva, not surprisingly, in a room. A basket of what appear to be lemons sits on the stage floor near a window with a tree visible outside, although both the window and the tree may be artificial. Toward the other side of the room is a large spare-looking rectangular table placed horizontally. Vishneva, barefoot throughout, is obviously upset about something – a family loss? a husband’s betrayal? a terminal illness? The audience isn’t told. She moves from one side of the room to the other and back, occasionally staring out the window (did her Romeo just depart?). Eventually, she removes a robe she’s wearing, revealing nondescript white ‘loungewear’ underneath – but later puts the robe back on. Neither action is taken for any apparent reason. She retrieves a silver tray from underneath the table and fills it with lemons. And then she pulls a knife out of a drawer on the upstage side of the table, slices a lemon or two – eventually all of them (aha, I thought; a theme: when life hands you lemons, you make lemonade!).

Thereafter, she goes totally bonkers, plays with the lemon halves (they’re eyes, breasts), and slices more lemons – and when she looks at that tree in the window, she suddenly sees images of herself imposed on the tree. Obviously she’s in some sort of asylum – except does an asylum allow its patients to play with knives? So it’s not an asylum, it’s a Spartan-looking kitchen. Or a studio apartment in Manhattan inhabited by a down-on-her-luck ballerina. After the piece appears to end, she picks up the lemons, walks offstage, and parades up and down two of the theater aisles handing out lemon halves to lucky audience members (who presumably use them to make lemonade of their own) – looking happy as a world-class ballerina can look who survived indignity – except it’s part of the dance. Eventually, she returns to the stage and tosses more lemons to the audience.

That Woman in a Room is a portrait of a woman’s descent into madness grows obvious as the piece proceeds, even if one doesn’t know its kinship to Man in a Room. (Or perhaps Carlson intended something particularly avant-garde, and it’s the audience that descends into madness watching it.) What it’s good for, however, is as a vehicle for Vishneva to show her undeniable strength as an actress: she found an infinite number of ways to express that she’s going out of her mind, and her facial expression literally changed from moment to moment. I can envision no other ballerina capable of pulling this off and making the audience still respect her in the morning. Watching her get through this with her artistic dignity intact is, well, mind-blowing.

On Sunday, Lopatkina put on a remarkable display of technical virtuosity, albeit in selections that allowed for little more than that. She displayed a range of characterization and emotions to be sure, but there was no opportunity for evolution or variation of character within any given selection.

Initially, Lopatkina herself assayed a selection from Carmen Suite, and her relatively cold stage persona made her character, at least as presented in this excerpt, credible. Her partner here, and in most of the other pieces in which she appeared, was the stalwart Andrey Ermakov, who did a fine job on his own, but, more importantly, consistently presented her to advantage.

Lopatkina (and Ermakov) also danced an extraordinary rendition of the pas de deux duet from Yuri Grigorovich’s The Legend of Love, perhaps not as powerfully as Plisetskaya did (seen on YouTube), but with remarkable strength and unwavering commitment to the choreographic athleticism. The pas de deux itself is relatively leaden, but the pyrotechnics were brilliantly executed, culminating in a thrilling upside-down overhead lift, from which Lopatkina spread her legs in ecstasy, her body forming a letter ‘T’ above Ermakov’s head before she fell to the floor, spent. More artistically significant, and an equally extraordinary achievement, was her rendition of Roland Petit’s La Rose Malade. And in Asaf Messerer’s Melody, Lopatkina was the epitome of liquid lyricism as she seemed to meld, under Ermakov’s control, into the ether, her pure white costume and the white scarf-like appendage that flowed from it making her appear like the figurehead of some celestial vessel.

Lopatkina also appeared in an excerpt from Act III of The Fountain of Bakhchisarai, with Maria Shirinkina and Roman Belyakov. The ballet’s climactic scene of love and death was appropriately melodramatic and flawlessly executed – but it rendered the presentation on this same program of the Maria and Vaslav adagio from earlier in the same ballet not just insignificant (which is how it impressed me), but unfortunate by comparison.

For me, Lopatkina’s most remarkable performance of the evening was in an excerpt from Alexei Ratmansky’s The Little Humpbacked Horse, in which she revealed a heretofore hidden attribute: a bubbly lightheartedness I’d not previously imagined coming from her. Her partner here was Vladimir Shklyarov, who also displayed a comic flair I’d not previously seen from him, which only enhanced his abundant technical facility, including a particularly remarkable repeated brise/jete combination.

Interspersed with the Lopatkina appearances were two sterling performances: the Act II pas de deux from Giselle, danced with Romantic ethereality by Shirinkina (albeit a bit too dour), and with power and agony by her Albrecht, Shklyarov; and the adagio from Act III of Shurale, lovingly rendered by Valeria Martinuk and Maxim Zyuzin. Considering the Yakobson revival of sorts that has recently materialized, this was a fortuitous inclusion in the program. The presentation also included the balcony pas de deux from Romeo and Juliet (the Leonid Lavrovsky version), danced by Ekaterina Osmolkina and Zyusin with appropriate (but, compared to MacMillan, somewhat muted) passion.

In a prescribed encore, Lopatkina provided an exquisite rendition of Michel Fokine’s familiar The Dying Swan, which was succeeded by a seemingly endless series of well-deserved curtain calls.