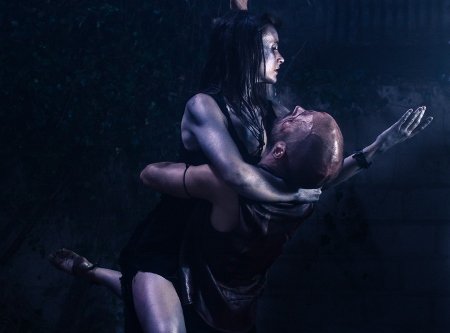 Mark Bruce Company, founded in 1991 and creating innovative narrative dance theatre, leapt to deserved prominence with their last production, Dracula. It was uniformly praised by the critics and at the 2014 National Dance Awards, won “Best independent company” with Jonathan Goddard awarded “Outstanding male performance, modern” for his eponymous lead role. It’s not easy to follow up such a resounding triumph and while The Odyssey has several strong features, not all the ideas work, undermining its overall success.

Wilton’s Music Hall is a wonder – houses from the 17th century evolved and expanded in 1860 to the present layout, with the surface of the original theatre left unrefurbished today. It forms a perfect setting for a work of fantasy. The basic structure of the set remains unchanged throughout the production but creative lighting by Guy Hoare and an intriguing, hollow, circular frame by Phil Eddolls conjure up strong visuals. The frame takes on a wide range of functions: portal, observation post, prison and then unfolded, it becomes a stylish boat and even Trojan’s Horse.

Bruce’s choreography and his dancers are also a great strength. Christopher Tandy as Odysseus imposes a powerful stage presence and his tall, lean body makes the most of Bruce’s dynamic steps. Christopher Akrill as Immortal Man stepped in after Jonathan Goddard, who created the role, was badly injured on the opening night. Akrill is a fine dancer actor and brings a menacing, playful quality to his performance. Hannah Kidd as Penelope succeeds not only as a passionate wife but expresses the loneliness and dejection of the long separation, characterised by the carving of gatepost marks on her back for each passing year. Eleanor Duvall as Immortal Woman casts a malevolent spell over all her scenes. The love duets for several of the cast with Tandy generate a sensuality I have rarely seen, making the most of Bruce’s distinctive floor movement.

In the programme notes, Bruce admits that the original story presents many problems and while he has cut back on some of the myriad episodes of the long journey home, he also felt it necessary to introduce a back story, which makes for even more scenes to cram in. Bruce also writes of, “…a world informed by the ancient, but that is of now.” Thus we see cod pop dance to cacophonous rock bands and the Cyclops as a lecherous Father Christmas. These scenes were no doubt meant to be amusing, but failed. At regular intervals we see Odysseus and others with anachronistic cigarettes, but the effect is jarring rather than revelatory.

In the second half, the narrative is more coherent, although some scenes could still be cut. The lead suitor for Penelope’s hand and the crown, Alan Vincent, makes an excellent baddie and his knife throwing scene against Wayne Parson’s Telemarchus works well as a silent movie routine. The finale with Odysseus is suitably dramatic and Penelope’s fury at her husband’s long absence, climaxing with a knife at his throat, made me catch my breath.

It has been said, “Only mediocrity is always at its best.” In Odyssey, we can see that Mark Bruce’s imagination and his choreography, particularly in duets, continues at the high standard we saw in Dracula. But the uneven aspects of this production make for a less than fully satisfying work.

Osipova and Goddard lead the way in the National Dance Awards