This year’s performance by the Mark Morris Dance Group (MMDG) at George Mason University (GMU) coincided not with snow, which has happened in past years, but with miserable cold rain. Nevertheless, my excitement wasn’t dampened. I always look forward to MMDG’s GMU performances, despite the long trek from my home in DC into the Virginia suburbs. I’m rarely disappointed. Even if every piece isn’t a hit with me, I can always find something to love about Morris’s choreography and his dancers and musicians.

For this visit, MMDG performed three works, two from 2018 — Little Britten and The Trout, and one from 2017 — Numerator, and all were new to me. I was a little concerned that I might head back to DC this year not having experienced the exultation MMDG usually offers after Little Britten, the opening work. I didn’t dislike Little Britten, but neither did it capture my soul. Lesley Garrison, Aaron Loux, and Brandon Randolph danced to Benjamin Britten’s Five Waltzes and Twelve Variations for Piano, played by Colin Fowler. Fowler and his piano sat on one side at the front of the stage. His back remained to the audience as he played, and he wore a pale sweatshirt, some kind of long, and full pants or skirt, but no shoes. The costumes for the dancers by Isaac Mizrahi had a similar casual flair. Aaron Loux sported a gray and white jail-striped unitard with a single spaghetti strap. Garrison had on a little toga over a gray t-shirt, and Randolph wore gray track shorts with loose fabric on top that draped in a long strip over one shoulder and billowed down his back like a cape, plus creamy legwarmers over his calves that almost resembled boots. The Greek costume nods reminded me of mythic heroes. 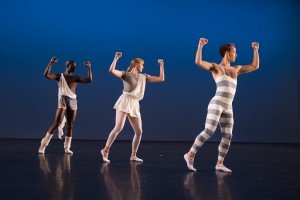 Some of the movement mimicked heroes, too. Dancers with their hands in fists, crossed at the wrists, deflected punches or asteroids hurtling toward them, and they bent their arms at a right angle, flexing their muscles. Garrison, legs spread wide apart, jostled back and forth like a football player doing warm-up drills. Was she preparing for a fight, a game, a deathmatch, or just going through the motions? Randolph kept holding his head and jaw, but this seemed less heroic and more like he was grappling with a memory.

As usual, Morris’s choreography made listening to the music pleasantly visceral. When Britten’s music showed its moods, so did the dancers, and the music jumped into my body. It’s this genius of Morris, his way of translating music into a visual and physical sensation, that’s unmatched by other choreographers today. Little Britten is one of Morris’s lighter pieces, I think. I appreciated its quirkiness, but it didn’t quite take off for me despite the fabulous performances by Fowler and the trio of dancers, particularly Randolph, whose long lines and musicality were especially satisfying. 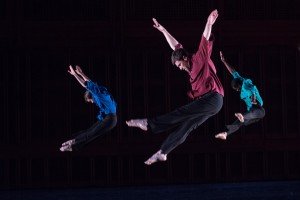 In the beginning, dancers crawled as if emerging out of a primordial soup. First, flat on the ground with the face turned, nuzzling against the floor, stretching, crawling, then eventually walking, and later gently running. They lyrically swished, changing facings. All of the swirls and waves were luscious and hypnotic, and with a little midair jump they sometimes flipped where they were going. When the movement gathered speed, my heart sped as well. The dancers’ arms curiously flung, going against forces that would propel them in the opposite direction like wayward particles battling a centrifuge. I had to stop taking notes and just revel in the intriguing loveliness. When it was over, I wanted to immediately see it again, a sure sign this is among Morris’s most best works and already among my favorites.

The Trout also turned out to be stunning and beautiful, another work in which you want to simply sit back and breathe it in, then sigh with contentment when it’s done. Franz Schubert’s “Trout” Quintet (Piano Quintet in A major, D. 667) is masterful on its own. The dancing, as I’d hoped, didn’t spoil the music, but again heightened my experience of it. The addition of choreography complemented the music, each a unique language. Here, as in Numerator, the emphasis is on gorgeous, graceful movement. Silliness is at a minimum, but the dancing is still creative and lively.

Former MMDG company member Maile Okamura contributed the costumes — vivid blue shirts and neutral colored pants for the men, coupled with full-skirted dresses for the women in various distinct colors with a sheer gauzy layer on top. Eleven dancers breezed on and off the stage, some hand in hand, some arm over shoulder, some alone. They sometimes exchanged glances. Among the lifts, spins, and pulls that developed, a dancer would leap up suddenly in front of the couple on which I’d been focused. The script-like shapes formed as dancers weaved around flowed with the music expertly played by Ramón Carrero-Martinez (viola), Wolfram Koessel (cello), Kris Saebo (double bass), Valtchev (violin), and Fowler (piano). 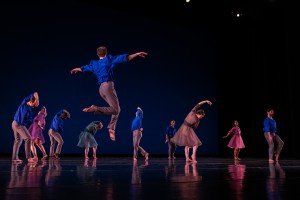 MMDG in The Trout, photo by Mat Hayward

The unspooling seemed endless, dreamy. In fast sections, dancers rapidly crisscrossed, some rushing forward toward the front of the stage. The near-misses were glorious and carefully orchestrated. Playfully, a line of dancers involved a game of leapfrog. A series of dancers, each with hand on another’s back, hopped up and away. A recurring gesture featured a lifted chest with arms extended a bit out from the hips and thighs, palms facing front. It seemed to be a sign of surrender, but a happy one. The Trout did get a little weird when dancers began to collapse, bent over, suffering, as if felled by a shared stomach bug. But it was a surprise, and it effectively broke the lingering rhythms, making one question the meaning within the work. And the dancers again became drifting propeller seeds, blowing about.

I want to close by giving a shout out to Karlie Budge, a new MMDG apprentice and an alumna of my hometown dance studio and former dance company, the Tennessee Children’s Dance Ensemble. Break a leg, Karlie! I hope to see you dancing as a full-fledged MMDG company member soon. Your passion for dance should take you far. It’s a passion I know we both had nurtured by Ms. Linn, one of our dear dance teachers. What a wonderful gift that is, whether dancing or seeing dance.