Mark Morris Dance Group’s Beatles-themed Pepperland is peppy. I almost always enjoy Morris’s choreography, and Pepperland is no exception. The music for Pepperland, however, challenges me. I’m not a huge fan of the Beatles, but I generally like the music of this iconic band. As Morris loves music and musicians, his works tend to feature live music. Indeed, along with the dancers, there’s the MMDG Music Ensemble. For Pepperland, the music is, unsurprisingly, played live. It’s also, well, not quite the Beatles. Morris and his dancers and musicians are keen on experimentation, so the fact that the music doesn’t straightforwardly reflect beloved Beatles tunes is also not surprising. I ended up feeling disappointed and puzzled by the music choices, though.

Ethan Iverson arranged several original songs of the Beatles (all from the album Sgt. Pepper’s Lonely Hearts Club Band, except “Penny Lane,” which was initially planned to be part of that album) and wove original compositions around them. I’m not a music critic, so I won’t dwell on my thoughts about the music. I’ll simply observe that I would’ve preferred more of the character and personality of the original Beatles’ songs. MMDG Music Ensemble’s Clinton Curtis is a fine vocalist, but I found listening to him sing jarring because I couldn’t help but wish to hear the voices of the actual Beatles, or something close to them. Curtis is no Beatle. Iverson’s bluesy original composition “Wilbur Scoville,” however, is great. I especially liked Sam Newsome’s soprano saxophone. Although the program notes explain that the first thing heard on the Sgt. Pepper LP is a guitar blues lick, and Wilbur Scoville was the inventor of the scale to measure heat in hot sauce, I didn’t get these connections when taking in Pepperland. Rob Schwimmer’s use of the theremin to create eerie quivering noises frequently made me cringe. In sum, I felt musically lost. 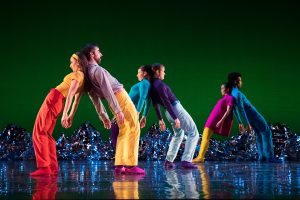 Setting aside the peculiar music, Pepperland radiates mostly warmth and fun, with some tinges of sorrow. The crisp yet fluid dancing kept me captivated throughout. Pepperland begins with a huddle of dancers that circularly unfurls. Behind them across the back of the stage are low mounds of what look like crinkled foil, which resemble rocky mountain tops or the tips of floating icebergs (set design by Johan Henckens). These background peaks morph as they turn varying rainbow hues, and the scrim in front of which they rest features changing colors, too (lighting design by Nick Kolin). The equally colorfully costumed dancers (costume design by Elizabeth Kurtzman), when leaping, fly above the landscape levitating like they’re in a dream. All of the vibrant candy colors — pink, red, yellow, turquoise, and purple, among them — set off cheery fireworks. 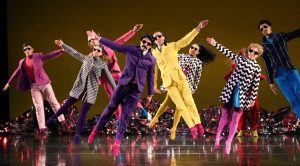 The moods and music of Pepperland take the audience on an emotional journey. Love and longing are obvious themes. There’s joy, but sadness also seeps in. Couples (both same sex and opposite sex) slow dance, hold hands, and spin one another around. In contrast to the elegant swooning, dancers, many in velvet pantsuits, exuberantly march like members of a band, knees pumping high. As well, they jump and tilt far to the side, closing their legs together, a single arm extended out from the shoulder, and this movement repeats. Another lovely series of repeating movements involves turns — first with fists parallel to front of the body, then bent over with arms extended behind the body like a downhill skier, and later with arms angled upward like goalposts.

Overall, the choreography is graceful and springy, carefully composed yet often carefree. Showing off some of Pepperland’s abundant humor, dancers take on personalities from the LP cover including Fred Astaire, Shirley Temple, and Albert Einstein. In a section to the music of “When I’m Sixty-Four,” dancers form a line that degenerates. Arms interlock, hips swivel, legs kick, but gradually the music slows, the dancers fall out of sync, and the energy purposefully and comically falters. Dancers act out the lyrics of “Penny Lane.” A barber shaves, a person drives a car, someone shields herself from the rain by lifting up her jacket. The hour-long Pepperland ends with a poignant goodbye, one that brings the dancers together, as in the beginning, in a winding swirl. 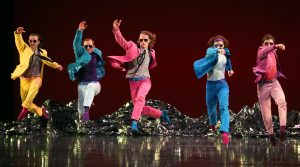 In closing, I want to give a special shout out to current MMDG apprentice Karlie Budge who shares my hometown of Knoxville, Tennessee, and also danced with my childhood dance company, the Tennessee Children’s Dance Ensemble. Karlie, may you continue to shine! I can only imagine what an honor it is to dance with such a fantastic group.