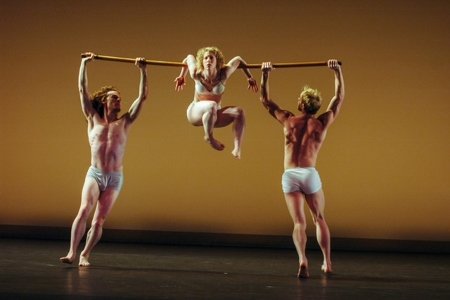 The Mark Morris Dance Group (MMDG) is often warmly welcomed in the DC area during the winter. A number of MMDG dancers have connections to the region, including the company’s newest addition, Durell R. Comedy, a native of Prince George’s County, Maryland, and a 2008 graduate of George Mason University, who joined the company as an apprentice in November 2015. Being at George Mason during an MMDG performance is sort of like being at a hometown sporting event, even though the company is based in New York, as the audience is full of hugely enthusiastic fans, many of whom are friends and family.

This year’s performance consisted of four works. First was Resurrection, a lively 2002 piece that is notable for its costumes and recorded music. The music is Richard Rodgers’ lively Slaughter on Tenth Avenue, while the costumes, whimsical black and white pajamas with varied bold prints, are by the fashion master Isaac Mizrahi. Resurrection presents a parade of amusing gestures and high kicks to Broadway fanfare. The choreography is full of humor and hijinks. There are gunshots and over-the-top collapses, plus a skittering undead figure and a triumphant ending. In all this silliness, there is a lot of enjoyment.

2005’s Cargo, inspired by South Pacific cults who believed that cargo was created for them by ancestral gods, left some of the silliness behind. Yet there is some humor in Cargo as well. The dancers are clad in basic underwear (costume design by Katherine McDowell), and the lighting design by Nicole Pearce bathes them in a dusty gold. The work begins in silence, but live music (Darius Milhaud’s La creation du monde, Op. 58) later joins. A dancer’s head tilts in wonder at a wooden pole. The dancers pass the pole around, lift it, toss it, hang from it, etc. A few more poles appear. The initial innocence displayed in the dancers’ expressions changes. As they learn to manipulate the poles, they cooperate and struggle. Sometimes a group of dancers looks shackled, like slaves on a ship. Shadows deepen, and the movement grows in intensity. Like in Resurrection, there is a death. Here, however, rather than ultimate triumph, the dancers look upon the body and run away. Is the message that outside influences are evil?

The evening’s final two works both debuted in 2015. Whelm, like Cargo, begins in silence. A dancer facing away from the audience lifts one foot up, then down, slowly, as if it’s stuck in gum. Subsequently the dancing is accompanied by gorgeous music by Claude Debussy, played expertly by pianist Colin Fowler. The costumes by Elizabeth Kurtzman and lighting design by Nick Kolin embrace darkness. Black gloves, a black hoodie, a black swim cap, are the four dancers angels of death or ghosts? There’s a dark clump that looked rather like bodies draped in black sheets on one side of the stage. The choreography, too, is dark, and also soft and plaintive and ominous. I sensed grief.  At some points the dancers seemed to sink or sway as if helplessly drifting.

Finally, there was The, to Bach’s Brandenburg Concerto No. 1 in F Major, BWV 1046 (arranged for piano four-hands by Max Reger and played by Colin Fowler and George Shevtsov). After Whelm, the bouncier attitude exhibited in The is a relief. In pastel flowy outfits by Kurtzman, an ensemble of 16 dancers weaves complex patterns that are characteristic of Morris’s strongest works. The musicality, as well, is signature Morris, with some very literal movement that matches the movement of the notes. At one point, fingers of the dancers crawl along the floor along with the fingers on the keys. Also rewarding are particular phrases that repeat. Dancers punch forward with outstretched arms. They lift an exultant fist high in the air. They frolic, hold hands, and skip happily.  In The, there is satisfying lightness and joy and hope.