To inaugurate the new year, Matthew Bourne’s New Adventures Company returned to the Kennedy Center with a new production of his popular retelling of Cinderella. Walking into the theater, patrons are greeted with signs that warn of air raid sirens. In the midst of a government shutdown, it wasn’t hard for me (a furloughed federal employee) or anyone else in DC to imagine worry and impending doom. Set during the London Blitz in 1940, the ballet has dark overtones that fit well with the Cinderella story.

The set and costumes by frequent collaborator Lez Brotherston, who won an Olivier Award for his original design in 1997, lend critical atmosphere to this tale. The darkness is quite literal. Brotherston’s set and costumes feature an extensive palette of depressing grays, like the ashes in Cinderella’s fireplace and the ashes of war, and are complemented by Neil Austin’s dusky lighting design. When the ballet’s heroine appears in a silver and white glittery gown and long white gloves, she stands out from the crowd of drab colors that surround her, bright and glowing where the others fade easily into the background. “The Angel,” a replacement for the more familiar fairy godmother, also wears silvery white that shines like the moon. His suit is reminiscent of a Las Vegas entertainer — suave and showy.

Bourne’s love of cinema is evident from the beginning. (In 2018, his company brought The Red Shoes, inspired by the Powell and Pressburger film of the same name, to the Kennedy Center). Black and white film footage (projection design by Duncan McLean) urges people not to stare at the sky in the event of an air raid, and yet the impulse to look skyward is apparently difficult to resist. 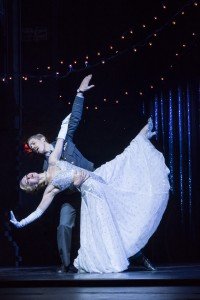 Cinderella (Cordelia Braithewaite) is a dreamer, of course. Somehow she ends up in the sky in one sequence, cavorting beside a giant crescent moon with The Angel (Paris Fitzpatrick). Having seen Fitzpatrick as The Angel, I’m convinced he’s perfect for the part. His long limbs and pert demeanor make him one worth watching. The other artist who captured my attention was Anjali Mehra as Sybil, the Stepmother. Mehra’s role is juicy, and she took full advantage of it. Her consummate acting brought much needed comic joy. Mehta’s drunken stumbles and resentful glances were top notch. Her varied expressions and emotional manipulations often moved me to smile.

I had no gripe with Braithewaite’s performance as Cinderella; however, I longed to witness more technically challenging choreography. Of the works of Bourne that I’ve seen, the choreography is in slavish service to the story, which contributes to fairly effective storytelling, but not always interesting dancing. In Bourne’s Cinderella, the movement tends to be simple, often bordering on pedestrian. The gestures are big and recognizable. For example, Cinderella and her crush Harry, the Pilot (Edwin Ray), both take a silver sequined high heeled shoe (not glass in this version) and hold it against the heart. Their hands grip the head in anguish. In another example, men mechanically tilt, arms extended straight out like airplane wings. Later these “wings” become the hands of a clock, but the form is practically identical. I’d prefer more creativity and subtlety in the characters’ expression, and more demanding choreography. Prokofiev’s impactful score exhibits a level of complexity that unfortunately overwhelms the rather lackluster dancing at times.

The most clever piece of choreography, and the most satisfying, is Cinderella’s duet with, initially, a sewing mannequin. She takes the dangling arms of a bare torso donning a jacket, and wraps them around her, coaxing the empty sleeves to lead her in a waltz. While she dreams of being in the embrace of her beloved, we see the mannequin come to life, albeit halfway. Here, Ray excelled. His doll-like jerks and overall stiffness were riotous and well executed. The duet between Cinderella and her father, Robert (Alan Vincent) didn’t live up its potential, though. Wheelchair bound, he barely squeaked along. If you’ve ever seen AXIS Dance Company, you know that that dancers in wheelchairs have a rich range of motion available to them, and this capacity wasn’t explored. 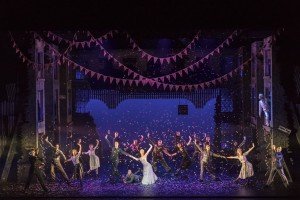 My primary gripe might be Cinderella’s transformation. She’s charming, if a bit mousy, in her eyeglasses. When she appears in a blonde wig sans glasses, she’s definitely been transformed, but the message is bothersome. Why can’t Cinderella be desirable in spectacles and without a blonde mane?

I did enjoy the addition of several family members to the traditional story. In Bourne’s Cinderella, there are three stepbrothers as well as two stepsisters. These stepbrothers are amusing, flitting around with toy airplanes and guns or worshipping Cinderella’s sparkly shoes. Their boyish buoyancy is cute. Another addition is a gay romance. Two men fall in love and reunite after the war, walking off hand in hand accompanied by a bouquet of roses. Absolutely, a fairytale romance should belong to everyone, and Bourne makes this point quite naturally and sweetly without banging it over anyone’s head. And there’s a refreshing twist about what ultimately happens to the stepmother, but I won’t give it away.

I recommend Bourne’s Cinderella as an absorbing piece of theater, bursting with poignancy and hilarity, less so as a work of dance. I’m drawn to the costumes and characters, just not the choreography, as it doesn’t deliver the kind of ballet virtuosity I so deeply appreciate.