I fell in love with the 1948 film The Red Shoes many years ago. Michael Powell and Emeric Pressburger’s cinematic masterwork, based on the Hans Christian Andersen tale, has touched the hearts of a lot of ballet lovers. In particular, I was entranced by Moira Shearer in the starring role. It’s hard to fathom anyone not being captivated by her beauty and charisma.

English choreographer Matthew Bourne is one of those the film drew in and beguiled.  It’s not surprising he’d be attracted to the idea of turning The Red Shoes into an epic ballet. Bourne is known for highly theatrical, lavishly staged productions peppered with humor that provide fresh twists on fairytale classics like Swan Lake, Cinderella, and Sleeping Beauty. His version of The Red Shoes fits into this mold. Yet it falls short in some significant ways. 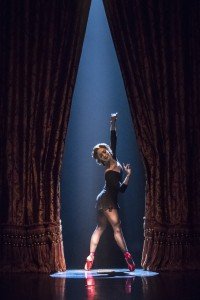 Bourne seems not be someone who subscribes to the notion that less can be more. Instead, he seems to be about more, more, more, sometimes to his detriment. His longtime collaborator, Lez Brotherston, contributed the set and costume design. The stage is full of eye-popping imagery, not even the smallest detail overlooked. The production design brings pure visual delight, but risks visual overload at times at the expense of the dancing and drama. The gorgeous period costumes and hairstyles delighted, too. The lighting design by Paule Constable capably conjured bright footlights, starry nights, and soft dark interiors. Bernard Herrmann’s music, however, did little for me, although I appreciated the fact that the tragic train accident is musically foreshadowed.

Unfortunately, on opening night in DC, there was a major technical glitch that paused the performance for nearly ten minutes, when the production had hardly begun. It appeared that the heavy rotating curtains, cleverly evoking both front and back stages and framing the dancing, got stuck on an angle mid-stage, exactly where the action was supposed to take place. When a pleasant-sounding British voice announced the interruption, I initially thought maybe the sudden break was a purposeful part of the show and was intrigued. Alas, it quickly became obvious that the wait was the result of a blunder and was not by design. 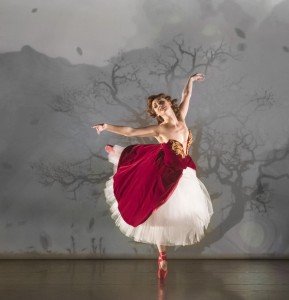 Honestly, those moving curtains seemed menacing from the beginning. The curtains of the mini-stage on the big stage glide forward to start the ballet and open to reveal a ballerina en pointe, of course wearing glossy red shoes. When the ballerina steps through the curtains again, she is with without those magical shoes, and the substance of the story takes off. We watch rising star Victoria Page (Ashley Shaw) at an elegant dinner party, vying for a chance to show off her dancing skills, hoping to impress Boris Lermontov (Sam Archer), a ballet impresario with a ballet company in his name. She does catch Lermontov’s attention with her endless spins and swooshes and lands herself among his esteemed dancers. She also catches the romantic attention of struggling composer Julian Craster (Marcelo Gomes).

It’s difficult to outshine Gomes, and no one does. He’s perfect as the handsome and tormented lover/artist. Gomes did all he could with Bourne’s largely uncomplicated choreography and made his character the most compelling of the bunch, which is a problem when the focus of the story is supposed to be the wearer of the shoes for which the ballet is named. 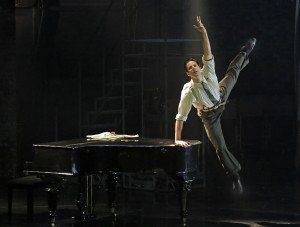 Shaw as Victoria Page was only mildly gripping. She has the red hair for the part, and oozed sweetness, but her conflicted passions didn’t come across strongly enough. Bourne’s choreography is at least somewhat responsible for this. I just didn’t feel an elevated sense of drama when Shaw was dancing. Her state of mind too often remained mysterious, making the story challenging to follow.

What made The Red Shoes entertaining and worthwhile, other than the sumptuous set and costumes, were the few scenes in which the dancing was actually enthralling. Gomes, in a highlight of the evening, threw himself into a frenzied solo that forcefully depicted his struggle between carnal desire and his desire for success as a composer. Other dancing highlights included Bourne’s New Adventures company members as members of The Ballet Lermontov warming up backstage and letting loose at an end of season party. In these scenes the dancing was lively, and one could almost get carried away by the dynamic joy.

In contrast, the ballet within the ballet, The Red Shoes, which supposedly launched Page into stardom, is overly long and absurd. The set design and costumes are striking — white and black dominate, which make the red shoes stand out. The tornadic activity, though, is odd, ineffectual, and almost laughable. On and on wind blows, rain falls, and dizzying projected leaves swirl around. This isn’t The Wizard of Oz, those are different red shoes entirely! And Bourne milked the East End music hall dancing that Page sank into once she left Lermontov for a little too long as well. I’m sure it was fun to choreograph embarrassingly bad dancing, with silly poses to cymbal crashes, but a brief taste of that was all that was required.