I came to Matthew Bourne’s Swan Lake fresh from attending a New York City performance of the Shanghai Ballet’s Grand Swan Lake, which featured 48 dancing swans. As you might imagine, the two productions were quite different from one another. Despite the overwhelming beauty of four dozen ballerinas in picture-perfect crisp white tutus, I prefer Bourne’s non-traditional version, where the swans are fifteen bare-chested males wearing shaggy fringed knee-length pants. The Chinese production, while undeniably lovely, failed to take off emotionally, but the same cannot be said for Bourne’s production. His handsome but menacing swans fill out a tragic tale that’s full of dramatic mood swings, ranging from light-hearted laughter to joy to true sadness and gut-wrenching pain. The only thing I missed was live music (the New York City Ballet Orchestra, conducted by Charles Barker from American Ballet Theatre, may have received applause equal to or greater than that of the Shanghai Ballet dancers, and the musicians heartily deserved it — there’s a warmth and vitality to live music that’s simply irreplaceable, particularly with a soaring score as beloved as Tschaikovsky’s). 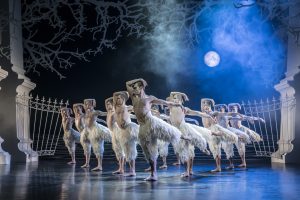 I had seen Bourne’s Swan Lake on DVD, but just as with live music, seeing it on stage is a much richer experience. Bourne is known for his very theatrical dance productions, and his Swan Lake, which premiered in 1995, helped launch his career. I’m sure it was received with greater shock then than now, but its poignancy remains powerful, and its tweaks to the story remain relevant. In fact, in light of recent events, especially Prince Harry’s announcement that he is stepping away from his royal duties, the story perhaps has even more force. Consistent with the original, The Prince is the central character in Bourne’s Swan Lake, but he takes on even greater importance and is the heart around which all of the action revolves. His loneliness and boredom, and his journey of self-discovery and search for affection, provide a coherent and moving backdrop for the introduction of the masculine and ultimately vengeful swans.

James Lovell, as The Prince, was perfect in my eyes. He is physically a bit on the small side, but that seems just right for a boyish prince beginning to blossom. Every emotion he displayed came across as genuine and heartfelt. He performed both anguish and ecstasy magnificently. The taller Max Westwell as The Swan/Stranger, appeared appropriately older and wiser, with lots to teach The Prince, and lots with which to tempt him. Westwell’s sex appeal was palpable, for sure. I always pick a favorite in the traditional Swan Lake, Odette or Odile, and here, Westwell’s The Stranger, dark and magnetic, was my winner. 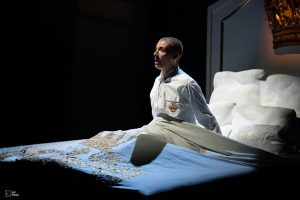 The other roles were exceptionally well cast, too. Nicole Kabrera was delightfully cold as The Queen, and Katrina Lyndon was splendidly ditzy as The Girlfriend. Also outstanding was Mari Kamata as the lead ballerina (Moth Maiden) in the hilarious ballet within a ballet. Kamata impeccably conjured a Romantic era ballerina, from her quirky movements to her comic facial expressions. The set and costumes by Lez Brotherston are amazing throughout Swan Lake, but the Moth Maiden ballet costumes are notably striking.

Much of Bourne’s Swan Lake is grandiose, including the giant scale of the set and the wonderfully lavish costumes, but small touches are critical to its success. The mechanical Corgi is uproarious, and it makes clear that the royal family in this story is British. The Girlfriend’s dropping her sparkly sequined purse over the balcony’s edge at the theater offers another fun moment, which of course could have been omitted, but it’s exactly whimsical touches like these that breathe extra life into Swan Lake and elevate the storytelling. 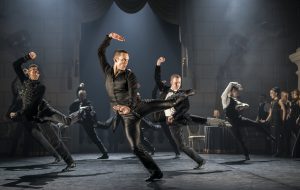 Storytelling is Bourne’s greatest strength. The choreography is generally interesting and serves the story, but as choreography goes, overall, it’s not phenomenal. I did like some of the repeated gestures — an arm draped over the head of a swan, some bird-like struts. The many stares, stomps, and hisses were effective, even when the choreography didn’t thrill. I wish that the tender duets between The Prince and The Swan were more complex and involved more intertwining and less twinning. The dancers, although undeniably talented, in this Swan Lake excel more as actors.

As a work of theater, Bourne’s Swan Lake is utterly enjoyable and impactful. As a ballet, it lacks the kind of dancing that makes a critic swoon, but the story and its telling are so engrossing that I quickly forgot I was even watching a ballet. The ending left me breathless. It’s unsettling and devastating and more potent than most I’ve seen. 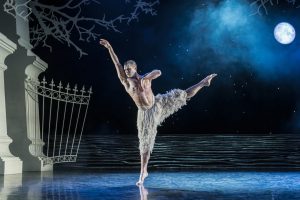