Sometimes I don’t do my homework. Sometimes I enjoy walking into a performance with no particular expectations. It’s a busy time of year, and so I didn’t do any advance reading about THE DAY. I knew who was involved in the production (cellist Maya Beiser, dancer Wendy Whelan, choreographer Lucinda Childs, and composer David Lang), and that was enough to get me in the door. I also barely glanced at the program notes before the performance began. I need new glasses, and the print was too small to bother trying to decipher it. So, I watched THE DAY with no preconceived ideas. I entirely missed that the performance was inspired by the tragedy of September 11, 2001.

As it turns out, I think it was good that I missed this rather critical piece of information. I may not have wanted to see the performance had I known this beforehand, and I would’ve had a very different reaction to THE DAY while initially watching it if I had absorbed what motivated this work. I can’t unknow what I know now, though, and so this review is tinged with observations made in hindsight, after I read the program notes at home in better light. 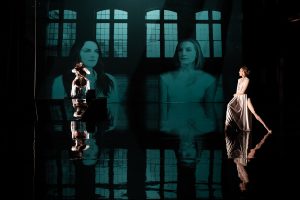 At first, I was intrigued. Beiser and her cello sat on a raised platform on one side of the stage, while Whelan, perched artistically on a stool, occupied the other half (scenic design by Sara Brown). Both performers wore white (costume design by Karen Young). Behind them were black and white projections (projection design by Joshua Higgason). Early on, one saw Beiser and Whelan, close up, speaking lines from the narrative text by Lang (the program notes explain that he crowd-sourced the text from the Internet). A dominant image was what looked to me like a large empty dance studio with high arched windows. A jumble of Polaroids and childhood photos of Whelan layered atop each other on the scrim at one point. Later, there was a scene of what I thought might be a train station lobby — people coming and going formed blurry inky brushstrokes. I didn’t catch, at the time, that this was footage from the World Trade Center. In my ignorance, I found the images lovely and less haunting than I do now looking back.

Whelan, cloaked in white, manipulated various props — elasticized ribbon, ropes, long thin sticks that resembled extra tall ski poles. The lighting design by Natasha Katz made it appear as if the stage was glossy, even wet. The floor reflected light. An expansive loop of draped fabric stretched the length of Whelan’s body, making interesting shapes, but she shed it after a while, stripping down to just shorts and a loose t-shirt. As Whelan moved, she seemed to embody the spoken words that rhythmically accompanied Beiser’s melancholic playing. The phrases were centered around the theme “I remember the day I ….”  Sometimes Childs’s choreography echoed the words too literally for my taste. When the words were “the day that darn boy punched me,” Whelan’s torso caved in. When the words mentioned running, she ran, and when the words mentioned walking, she walked (albeit backward). Beiser mostly just played her cello, but a few times Whelan approached her and they stared at each other for a moment. 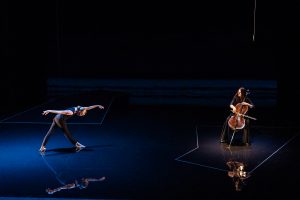 After the final words of Lang’s narrative composition, “I wrote my letter of resignation,” came noises that resembled a rumbling storm, which subsequently sounded more like something crumbling and falling apart, like maybe the destructive force of a flood (sound design by Dave Cook). Then the images dramatically changed — a shattered cello, a dark ocean and sky. From the first half of the performance, I gathered that THE DAY was about memories and the passage of time, about sadness and tension and finding ways forward. There were certainly elements that seemed eerie, ghostly. I didn’t, however, make the 9/11 connection.

When the performers re-entered the stage for the second half of THE DAY they wore black and swapped their positions on stage, with Whelan starting out on the elevated platform, and Beiser opposite her, on a stool. Here, the music included repetitive recorded loops over which Beiser played. There were some sighing vocals, too. Her playing became a little more animated, with some hair tosses and big gestures. Whelan moved differently, too. Instead of mimicking the words and slowly striking poses, she danced more straightforwardly. Here is where my attention waned (and I noticed several patrons exiting the theater). Whelan looked awkward in the basic contemporary movement she executed. Her upper body seemed stiff, her shoulders tight. I sensed no emotion. I missed having the words. 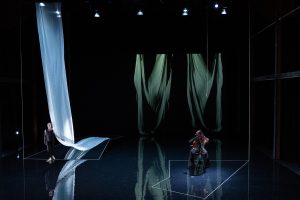 Whelan left the platform and returned a few times. She rolled down it more than once. The final time, she wrapped herself in a length of sheer white fabric, like a fly being knit into a spider’s web. Now, of course, I can see that the fabric, an elongated rectangular curtain that unfurled from the ceiling and then loosened and dropped, was one of the twin towers falling. Had I recognized this fact while watching, I may have felt moved, but probably not moved in the way the collaborators intended. In hindsight, armed with this knowledge, I feel disturbed and even irritated. Tragic events obviously aren’t off limits as inspiration, but they should be handled with great care. Unfortunately, THE DAY felt more like a piece to celebrate its performers than it did one to offer a respectful and compelling view of that devastating historic date. Not only did I not especially enjoy the performance, but upon learning about its origins, THE DAY definitely rubbed me the wrong way.