Miami City Ballet returned to New York Wednesday night for its first full-program visit in seven years, and brought with it a week of welcome Miami sunshine to finally break winter’s grip on spring.

The company also brought with it a wonderful, albeit abbreviated, program, and spectacular performances. Lourdes Lopez, MCB’s Artistic Director and former NYCB principal dancer, should be beaming. 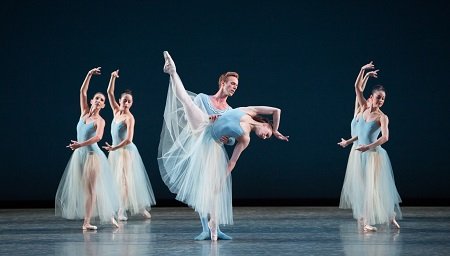 Aside from its programming choices for this run, which appear designed to show the company’s multiple facets and capabilities to the fullest extent, this is already a historic visit. The company has deep Balanchine and New York City Ballet roots, and this seven performance run is its first visit to the David H. Koch Theater, NYCB’s home, so in ways that not all of its current roster of dancers might understand, it’s a homecoming (and many NYCB dancers, past and present, were in the audience to welcome them back). And although the program as a whole features a wide range of choreographic talent, Lopez recognized its significance by opening the run with a single performance of the ballet indelibly associated with NYCB, and perhaps most endearing, and enduring, to NYCB’s audience: George Balanchine’s Serenade. This was not an ‘in-your-face’ challenge; it very clearly was an homage, and it was a moving, marvelous, and somewhat miraculous performance.

And it was so on more than one level. It also marked the triumphant return to New York of Simone Messmer, with a performance that might well be comparable to the finest in the ballet’s long history.

From its first moment, when Balanchine presents the piece’s full corps of women, their right arms upraised, this is consummate Balanchine stagecraft, as well as one of NYCB’s iconic images. But last night it was also MCB’s poignant salute to Balanchine, NYCB, and the memories, and the legacies, that permeate this theater’s walls and populate its atmosphere like beloved apparitions. And from that point on, the ballet was executed with a level of proficiency at least equal to that by NYCB. There were a few very minor timing issues hardly worth mentioning (one corps dancer’s arm was raised a bit slower than others, for example, or held at a slightly different angle), but such minor imperfections, which happen with NYCB performances as well, show only that the dancers aren’t machines. The corps handled the choreography brilliantly.

But it was the lead dancers who made this performance as memorable as it was. The two men, Rainer Krenstetter and Chase Swatosh, danced with appropriate stoicism and more than appropriate capability. Nathalia Arja, a charming firecracker of a ballerina, executed her featured role very well, and the lusciously lyrical Emily Bromberg delivered one of the most memorable interpretations of the ‘Dark Angel’ role that I’ve seen. Hers was not the usual detached presence: her Dark Angel was a rock-solid, but also a warm and sympathetic spirit.

But Simone Messmer was the performance’s soul.

Messmer has had a difficult professional time of late. A former American Ballet Theatre soloist, she relocated to San Francisco Ballet for greater role opportunities. Now, with MCB, she appears to have found a home.

The lead in Serenade is not one I would have envisioned for her. She always impressed with her strength and technical facility, but in this role I prefer seeing dancers more fragile and ethereal-looking than she is. But Messmer not only made the role her own, she transformed it. She executed Balanchine’s choreography flawlessly, but she also imbued it with remarkable emotional depth without at any point converting it into melodrama. The final image, the ‘apotheosis’ in which her character is lifted by four men and slowly proceeds to…wherever, is always moving – in part because of its mystery and what the viewer sees in it, and in part because the ballerina already appears to have lost corporeal existence as she bends backwards, as a form of supplication and submission, while she’s being escorted toward some heavenly light. Messmer didn’t just bend back gracefully; she lowered her upper body so that it went backward below her waist, narrowing the angle between her legs and her back more than I can recall seeing before. That she managed this without making the effort look in any way awkward or showy demonstrates not just remarkable flexibility and confidence, but how determined she was to make the image even more memorable than it usually is. It was a truly noteworthy performance.

Still more remarkable is that it was her role debut.

One might think that after Serenade, the second piece on the gala opening night program, Symphonic Dances (which followed a musical interlude in which the redoubtable New York City Ballet orchestra, conducted by MCB’s Principal Conductor Gary Sheldon, gave a sterling rendition of excerpts from Tchaikovsky’s Mozartiana) would have been a letdown. It was anything but. 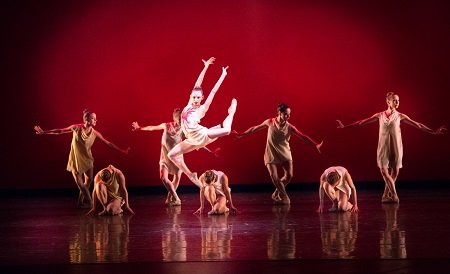 This version of Symphonic Dances, which MCB commissioned from Alexei Ratmansky, is not to be confused with the ballet created to the same composition by Sergei Rachmaninoff by Peter Martins for NYCB. It is startlingly different – to that piece and others that may utilize the same music, but also to anything else out there I’ve seen. It’s endlessly interesting and outrageous – and one of Ratmansky’s most fascinating creations. With a little bit of the gothic Romanticism of Balanchine’s La Sonnambula, it is a ballet which perhaps has a story, but in the end whatever story there may be is far exceeded by its stylistic choreographic variety and audacity. And as performed by MCB’s dancers, led at both performances by Jeanette Delgado, Arja (did I say already that she’s a little firecracker of a ballerina?), Tricia Albertson, Kleber Rebello, and Renato Penteado, the piece percolates with vivacity and mystery. Ratmansky’s choreography not only illuminates the music’s romantic and melodramatic texture, it enhances the aural perception of it as the stage action abruptly changes – which seemingly happens with every musical phrase.

I saw Symphonic Dances twice, and the second time was as impressive to me as the first. I can understand why some may consider it to be an incoherent choreographic and costumed mess. But this isn’t a failing of the ballet – it was intended to come across as it did, and there’s nothing unusual about a ballet with changes in focus and appearance between each movement, or with any meaning behind the action on stage being unclear and ambiguous (and perhaps unnecessary). That Ratmansky here does more – apparently changing choreographic styles within each movement – makes the ballet look particularly strange. Balanchine (and other choreographers) did the same thing, but it may be less startling because we’re used to seeing it. And with Ratmansky, the intellectual component of his dances, which to one extent or another are usually present, are often difficult to decipher. I know there is one to this piece, and maybe will figure it out after five or ten more viewings. But here it doesn’t matter; Symphonic Dances is a choreographic and visual feast – and its final image of Arja sailing into the arms of her partner is as remarkable, and unforgettable, as Balanchine’s final image from his Tchaikovsky Pas de Deux.

My review of MCB’s two ‘formal’ programs will follow. But I already have two regrets from this visit – that Sara Esty, whom I highlighted several times in reviews of previous MCB performances, is no longer with the company (last I heard she was performing on Broadway in An American In Paris), and that Serenade is only being performed once during this visit. Make that three regrets – that MCB’s visit is so short: I want to see more of their repertoire, and I fear that they’ll take the sun back with them to Miami when they leave.