It’s an interesting concept: a community orchestra performing onstage in semi-staged productions of well-known ballets reimagined by a contemporary choreographer.  Last year the 80-piece Cambridge Symphony Orchestra (CSO), under the direction of Cynthia Woods, performed Stravinsky’s Firebird to choreography by Gianni Di Marco.  This year the same collaborators worked together, with the CSO taking on the incidental music to Mendelssohn’s A Midsummer Night’s Dream for which Di Marco created a compelling new ballet.

Because Di Marco, formerly a Boston Ballet dancer, is now associated with the Boston Conservatory, it seemed likely that the dancers would be students.  In fact, they were professionals with considerable experience.  Highlighting the cast were Ruth Whitney, a radiant Titania; Roger Creel, a regal Oberon; Zackery Betty, a quicksilver and unabashedly funny Puck; and Di Marco himself as Bottom, a happy-go-lucky mechanical turned bewildered donkey.

When they were onstage together during the scherzo, Oberon looked a bit ponderous in contrast to the fleet and hyper-athletic Puck, with his one-handed cartwheels, splits, jumps, and spins, but that was a premature assessment.  Creel came into his own as partner to Whitney in a grand pas de deux that took place after Oberon and Titania were reconciled following their spat over the changeling child. 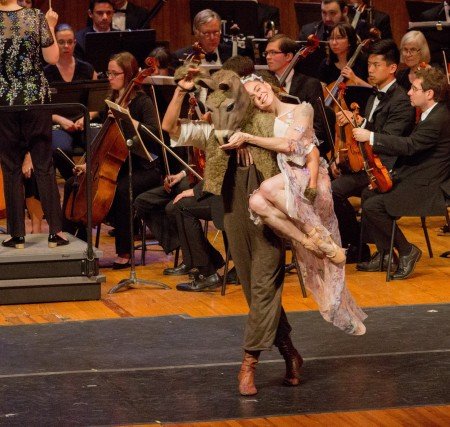 Creel turned out to be a spectacular partner.  The overhead lifts, one after another, were rock solid, and the less-airborne ascensions, as in some supported arabesques, equally so.  A promenade in which Creel had one arm around Whitney’s torso was reminiscent of a similar move in Ashton’s “The Dream,” but it improved on the original by not making Titania seem overpowered.

Whitney was a beautifully stretched-out queen of the fairies, with legato lines that made one movement blossom rapturously into the next.  In one particularly impressive lift she was in a laid- back position, arms over her head, as Creel swooped her around in a circle, with her head nearly touching the floor.  It was an object lesson in exquisite partnering, and Creel was essential in making it appear effortless and emblematic of ecstasy.  Kudos to the choreographer for envisioning how a position so fraught with peril could be turned into poetry. 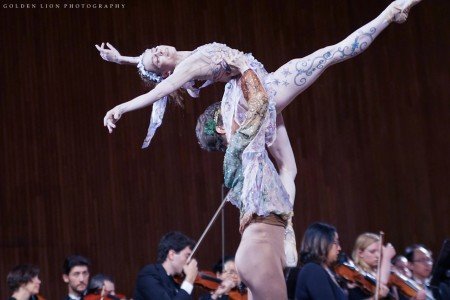 Bottom and the mismatched lovers

Bottom, played by Di Marco, is the only one of the six comic tradesmen, or “rude mechanicals,” as Puck calls them in Shakespeare’s play, included the ballet.  When he first appeared onstage with a hobo’s stick and bag over his shoulder, doing lots of skipping jumps and buck and wings, he seemed to be a man without a care in the world.  Once he became a donkey, he was transformed in more ways than one.  The choreography at that point managed to reflect the influence of both Balanchine and Ashton’s versions of the tale.  This donkey was not quite as full of pathos and confusion as Balanchine’s, but also not as assertive as Ashton’s (and not en pointe). 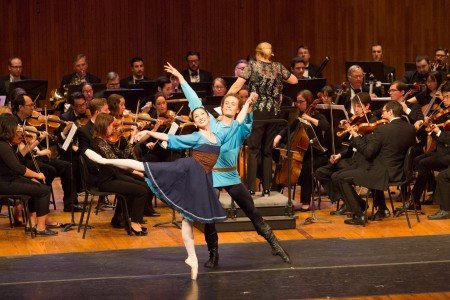 The presence of Ashton could be felt in the donkey’s reaction to Titania’s scratching his back and in his mostly upright posture.  In general, however, the impact of Balanchine was more predominant, from the focus on food – Di Marco’s donkey tried to eat the garlands the fairies placed on his head – to a couple of promenades with Titania lying back in his arms.  Also, unlike the donkey in “The Dream,” Di Marco’s hands were not encased in hooves, and that allowed for a number of partnered moves such as skipping in a circle while holding hands, promenades with Titania in arabesque en pointe, etc.  In two particularly memorable moments, Di Marco’s donkey, standing with legs flexed, beckoned to Titania, who jumped into his lap as he caught her with one arm. Then he raised the other arm to feel his long, pointy ear as if he couldn’t believe it was on his head.  The sequence nicely embodied the contrast between the donkey’s confidence and perplexity. 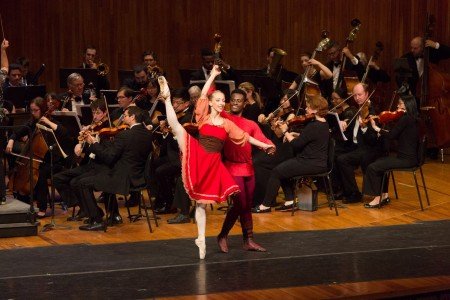 The two Athenian couples were dressed in matching colors: red and blue.  Oberon actually used the costumes to chastise Puck for putting the wrong lovers together, using a gesture that seemed to say, “See these mismatched colors, you silly fellow; you’ve got them mixed up.”  Jacob Louis Hoover as Lysander, Elizabeth Mochizuki as Hermia, Jean Robins Georges as Demetrius, and Kseniya Melyukhina as Helena were especially effective in the fighting scenes — jumping on each other’s backs,  putting up their dukes, slapping each other’s faces, and running after their disaffected paramours with unwanted kisses.

In addition to the orchestra, the two principal singers, Joanna Porackova and Vira Slywotzky, were onstage during the song “Ye Spotted Snakes” while Titania and the two fairies, Hannah Keene and Amane Takaishi, were dancing.  All this created visual conflict; one didn’t know where to look.  Also onstage, but far enough away from the dancers that they were not a distraction, was the New England Conservatory Young Women’s Chorale, which is under the direction of Jonathan Richter. 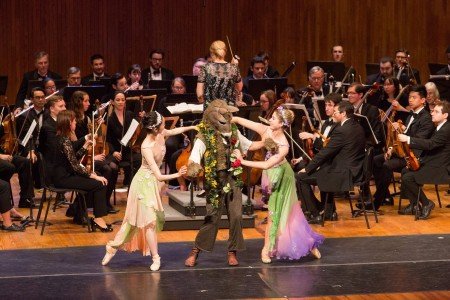 When Slywotzky returned to sing “Finale,” she did a few dance steps with the fairies, and the effect was more harmonious (pun intended) since one’s attention wasn’t divided.  In most productions the singers are offstage, but if they’re going to be visible, wouldn’t it be better to place them further away from the dancers until they actually interact with them? 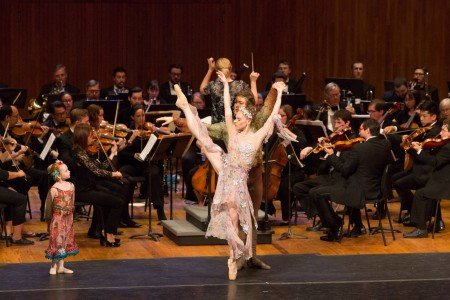 Another innovation of the production was an expanded role for the changeling child, who was played by Leah Rzepka, an incredibly self-possessed first grader.  After the nocturne pas de deux she came out accompanied by a fairy (who quickly disappeared), stood between Oberon and Titania at center stage, and put their hands together.  Then she moved to Oberon’s right, took his free hand, and walked offstage with Titania leading the way – what a charming denouement.

In a press release music director Cynthia Woods has said that “ballet companies usually situate the orchestra in the pit, relegating the music” to an accompanying role and that putting them onstage allows “for a tightly integrated … partnership between sound and movement.” The reason for placing musicians in a pit is not to relegate them to a subordinate position, but to allow the conductor to communicate with the dancers.  In this performance, however, the dancers and orchestra were in sync even though the conductor’s back was to the dancers.  I asked how this feat was accomplished, and Woods replied that she “attended many dance rehearsals … so that [she] knew exactly what was happening throughout.”  She also noted she “could actually hear [the dancers’] breathing and footwork quite well, which was very helpful for tempo issues and connecting.”  In addition she credited Di Marco with the idea of having “the orchestra recorded at several … different points throughout the cycle so the dancers could dance to [the orchestra] …. That helped the most because [we] could see when things didn’t connect plus it allowed [the dancers and musicians] more time to sort of meld together.” 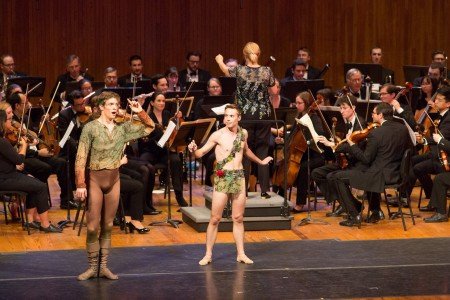 My guess is that the challenge of melding the music and dance was probably most acute during the nocturne pas de deux because that was when the dancers were most exposed and mistakes would be obvious.  In a testament to the skill of Woods and Di Marco the performance was so well coordinated that Titania and Oberon’s pas de deux positively glowed with love and abandon.