Do you believe in magic?

It may not be magic per se, but the current MOMIX program at the Joyce Theater is a magical dance / theater experience. Some may say that it’s long on theatricality, acrobatics, lighting and staging (and not a little mysticism) and short on choreography and intellectual statement – a cross between a series of circus acts and contemporary pre or post-Olympic extravaganzas – but it’s far more than that. This Joyce program (titled either MOMIX or Viva MOMIX or MOMIX Forever, depending on the information source) is one of the most beautiful and entertaining evenings of dance I can recall seeing, presented with consummate artistry by a talented and engaging cast. And it’s refreshing to emerge from a dance program thoroughly entertained, without scratching one’s head as to the meaning of it all or whether choreography was delivered as it was intended to be a century ago.

I’ve been aware of MOMIX for a very long time, but I’m almost ashamed to say that this was my first exposure to it. There was always something more important that I had to do than spend my time watching what I anticipated would be a Pilobolus clone. That mistake will not be repeated, but it enabled me to see this performance with fresh eyes, which widened in response to pure visual pleasure as the evening progressed.

Founder and Artistic Director Moses Pendleton co-created Pilobolus Dance Theater while at Dartmouth College in 1971. Pendleton eventually separated from Pilobolus and in 1980 founded MOMIX. In program notes and on the MOMIX web site, the company is described as a one of “dancer-illusionists.” That’s true, but the illusions don’t come from the dancing; they come from the way the dances are mounted, including the sets, lighting, and staging. And although the images created are startlingly visually beautiful, it is the beauty of human bodies in constant fluid motion rather than static visual images. 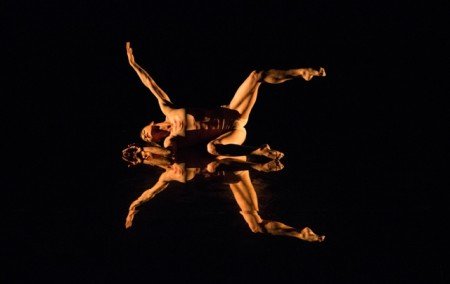 Comparing MOMIX and other forms of dance is the proverbial apples and oranges. What distinguishes MOMIX’s moving images from others is their inventiveness. Other contemporary dance and ballet companies have used visual projections, strategic use of props, and lighting effects to produce unusual imagery that either augments the choreographic concept or overwhelms it, but Pendleton and his creative associates (members of the company and staff, including Associate Director Cynthia Quinn, costume designer Phoebe Katzin, and a small army of lighting designers) at least based on this program, meld all of it together in indivisible coherence such that one component could not exist without the other. The truly extraordinary live visual moving images draw a viewer in if for no other reason (and there are lots of other reasons) than to try to figure out how Pendleton and his dancers (and his unseen technical staff) do what they do. And I won’t comment on similarities and differences between MOMIX and Pilobolus. Suffice it to say that there’s room for both – and more.

Finally, for this overview, it should be noted that this program includes nudity. But while the sensuality in these dances is almost pervasive, with or without costumes, there’s nothing gratuitous about any of it. It’s not sanitized, but it’s not salacious either. As it appears, it’s all extraordinarily beautiful. And how can you not love a company that alerts the audience to the occasional nudity via a pre-performance announcement … delivered entirely in French. 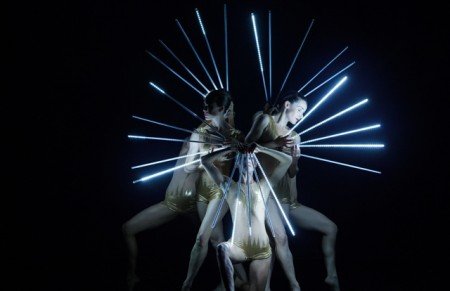 The eighteen dances on the Joyce program are taken from five themed MOMIX programs – MOMIX in Orbit, Botanica, Opus Cactus, ReMIX, Lunar Sea – plus several pieces described as Classics and three that were created for its 35th Anniversary Season three years ago (each of which was celebrating its New York premiere during this engagement). There is another themed program that apparently is represented in some of these combined programs – Alchemia – but it’s not included, at least not by name, in this Joyce set.

Describing each of these dances cannot adequately replicate the visual presentation (and, to the contrary, may make them sound sterile) so in many cases I’ll skim them, focusing on those I particularly liked. The program ranges from the opening piece, Pleiades (from MOMIX in Orbit), in which three women – Simona di Tucci, Heather Magee, and Jennifer Chicheportiche – manipulate props that look like long sticks (batons), one in each hand, and then whirl the batons around and whirl themselves around the stage changing the position of the batons in the process, such that the batons transform into seemingly solid objects, eventually morphing into orbital rings surrounding the dancers’ celestial bodies (backed by the appropriately titled The Mystik Dance by El Hadra), to the closing piece, If You Need Some Body (ReMIX), which I’ll elaborate upon below. 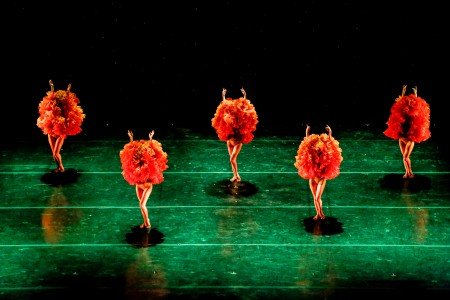 In between are a variety of dances, with “variety” being the operable word. Tuu (Classical) is a complex pas de deux with emotional gloss that seems to explore a relationship, but in which the two dancers – Sarah Nachbauer and Jonathan Eden – executed complex weight shifting and counterbalancing in the course of a highly intimate display of body control. [TUU is the name of the group whose music (One Thousand Years) provides the dance’s musical accompaniment.] One of my favorite dances was Marigolds (Botanica), in which Magee, Nachbauer, and Jocelyn Wallace slowly emerge from orangeish fuzzball flowers (which at times also resembled slowly-opening fuzzy orange clam shells) and transition into dancers in fuzzy orange tutus and then into characteristic Spanish Flamenco / Argentine Tango dancers who transition back into … fuzzy orange flowers. Pole Dance (Opus Cactus) followed, in which three men each skillfully manipulate pole-vault-like poles against which they pushed off and upon which they balance themselves and each other, backed by vaguely Native American tribal-themed music.

Baths of Caracalla (ReMIX), in which the five women already identified dance with white fabric-like props (at first, waist to toe white skirts, which convert into oversized bath towels and then into oversized flags) such that the sensuality of the women’s body movement was enhanced by the sensuality of the prop manipulation (or vice versa), was succeeded by Daddy Long Legs, a piece for Eden, Jacob Stainback, and Jason Williams, has the three men in pseudo-American Western (or Argentine gaucho) outfits dance with one leg extended by a stilt-like object hidden within the pants. The dance required unquestionable skill, but was one of the few on the program that didn’t appeal to me. The other two 35th Anniversary Creations, Light Reigns and Paper Trails, did.

Light Reigns has the five women carrying and manipulating wands of sparkling, moving “crystals” of white light. On the darkened stage, the props looked like a cross between light sabers (Star Wars) and an illuminated Excalibur (King Arthur), except the combination of the stage movement and the manipulation, coupled with the lighting effects and the music (Alchemy, by Deuter) created a gorgeous image of a regal quasi-religious ceremony. 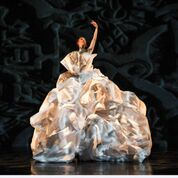 But for me, Paper Trails was the evening’s highlight, and an unquestionable masterpiece – not because of the tastefully displayed nudity, but because to my eyes it was a work of contemporary moving visual art that was intoxicating and audience-manipulative, but in a creative and non-exploitative way. To a musical background that Pendleton assembled from several sources, the dancers (the entire cast) move within and without, and emerge in whole or in part from, costumes that appear to be created from white paper, all against a background of dim light and shadow and projected moving vertical segments of multidimensional tan/yellowish coloration. The distance separating the audience from the stage that Pendleton and his staff create here through the intermittent visual camouflage doesn’t disconnect the audience from the action; rather, it invites the audience to try to figure out how all of it is put together. More intriguingly, the dance, which is beautifully structured and executed even apart from its visual context, makes the dancers appear as mesmerizingly moving human calligraphy on an equally animated parchment canvas. 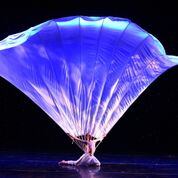 Following intermission, Echoes of Narcissus (Botanica) was another highlight. Originally created for Diana Vishneva, the solo exploits (in a positive way) Nachbauer’s incredible physicality and sensuality. The piece appears to present two dancers moving sensually in sync (I suspect it’s intended to look that way – it fooled me) but it’s really Nachbauer positioning herself on a mirrored platform dancing a sensual duet with her reflected image (the piece isn’t called Echoes of Narcissus for nothing) until she dissolves into her reflection. The piece, and particularly Nachbauer’s execution of it, is breathtaking.

Snow Geese (Lunar Sea) has the five women in the cast illuminated against a black-lit background such that only their arms and shoulders are visible, creating the image of flying birds. The shapes morph into other shapes as the dance progresses (serpents; body parts) creating an eerie, other-worldly ambiance. In Dream Catcher (Opus Cactus), Magee and Williams manipulate a strangely shaped object (think highly polished monkey bars melted and reshaped into something vaguely resembling a Native American dreamcatcher). Pushing and balancing themselves against and upon the object was sufficiently interesting, but more gasp-inducing was how each dancer somehow was able to push this multidimensional irregularly shaped object across stage so that it lands in perfect position to be caught in the arms of (or to pass over the body of) the other dancer. Not only were the dancers caught in the same dream, they were catching each other’s dream. 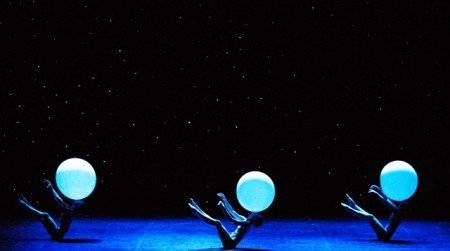 Following Brainwave (Classic), a duet for Eden and Williams, Spawning (Classics), in which four women manipulate and balance balloons as if they were gradually maturing oversized fish eggs (and that doesn’t describe the half of it), Man Fan (Botanica) in which Eden manipulates a gigantic floor to ceiling cape (think topsail or spinnaker), created by Michael Curry, culminating in a slow, purposeful, mystical offstage transit (think Solar’s exit early in La Bayadere’s dream scene as he follows the image of Nikiya offstage right), and Table Talk (Classics), in which Williams displays the strength and grace of an Olympic gymnast as he navigates over and around an elevated “table” platform (and eventually lifts and dances with it offstage), Aqua Flora (Botanica) resumed the Indian / mystical motif as Chicheportiche manipulated a combination veil and dress seemingly made of strings of pearl-like glass and air (again, the prop was created by Curry) in an ever-expanding display of control and sensuality. Aqua Flora is an example of how a seemingly simple sequence of steps and movement can be transformed into a stunningly mesmerizing lyrically balletic dance experience (this piece too was originally created for Vishneva). 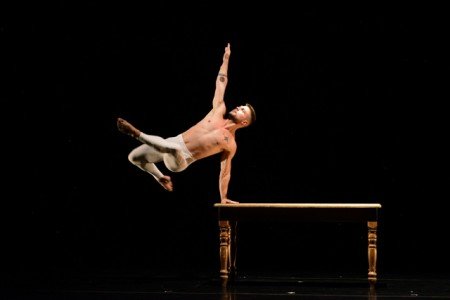 The evening concluded with a second masterwork. If You Need Some Body is a comic dance, but it’s far more than that. Choreographed to J.S. Bach’s Brandenburg Concerto No. 2 in F Major (Allegro), If You Need Some Body creates a sense of abnormal reality as the dancers skillfully manipulate and dance with life-size dummy/puppets such that it becomes increasingly difficult to distinguish between the living and the artificial bodies. The piece bears a surface resemblance to Paul Taylor’s masterpiece Esplanade, even to the point of participants (some of the dummies) (I think) being tossed into the air as the dance grows from sequential seamless focal points to controlled frenzy, but here the emphasis, as usual, is on illusion – created without the assistance of lighting or projection effects. If You Need Some Body is a hoot, and maybe – as a commentary on the nature and appearance of reality – the most cerebral piece on the program.

As might be by now obvious, this MOMIX program is one of the highlights of the 2018 dance year. And don’t let anyone suggest that it’s all visual fluff: it may not be intellectually stimulating, dramatic, or avant-garde, but it’s an entertaining, magical dance theater experience. The program will be at the Joyce until August 12 (family programs are offered on weekend matinees). Miss it at your peril. See it and you’ll believe in magic too.