Monica Bill Barnes & Company’s Happy Hour is a huge success. The free food is nice (including perennial favorites cheese puffs, Goldfish crackers, M&Ms, and Twizzlers), but the dancing is what truly hits the spot. The Happy Hour I attended at MilkBoy ArtHouse, a community performance venue, restaurant and bar adjacent to the University of Maryland campus, was part of the Clarice Smith Center for the Performing Arts’ Visiting Artist Series. To begin at the end, Happy Hour ended with happy people. Not all happy hours can boast that! What made the audience happy was the thoroughly entertaining performance.

By chance, I had just come from a reception at my office, and was wearing a suit, so I had been primed already for the scene that unfolded. Upon entering the upstairs bar area, I encountered a space decorated for a party (streamers, balloons, tables covered in plastic tablecloths, cluttered with food and drink), and a chatty emcee, Robbie Saenz de Viteri. He warmed up the evening’s guests by asking questions, engaging in playful banter, and handing out party favors. His brief appearance, although it didn’t involve dance, definitely was an important piece of the show. Saenz de Viteri established a friendly rapport with the audience and set the stage for what came next.

And what came next was Monica Bill Barnes and Elisa Clark, two female dancers, dressed as men in suits and hats. They’re frenemies, the sleazy uncool kind who hang out at the periphery of a forced social gathering like an office happy hour and jointly plot to hit on women. These men are stuck in a different era (the music, along with the dancing, has many echoes of the past). They’re also fundamentally lonely. While one might not naturally feel sorry for them at first, the power of the performers was such that the characters did elicit some sympathy. Indeed, it’s a tribute to the dancers that the vulnerability of the rather loathsome men they portrayed comes across so well. 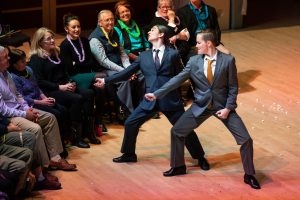 Instead of wanting to cross a room to avoid the awkward pair, the audience was riveted by their every move. And what moves! In many more theatrical dance performances, dancing is given short shrift, but not so here. Or at least I didn’t feel that way. To the contrary, I felt that the choreography was brilliant and the dancing was superb. I was especially impressed by Clark (a native of the Washington, DC area, formerly of the Mark Morris Dance Group and the Alvin Ailey American Dance Theater, among others) because although she didn’t originate the role (her part initially belonged to Anna Bass), she seemed so perfectly in tune with Barnes. In fact, I couldn’t imagine anyone else performing the part so adeptly and convincingly. Together, Barnes and Clark make a perfect comedic duo, and they’re amazingly skilled at hoofing, too.

Much of the dancing is tapping, minus the taps. Vaudeville frequently comes to mind. The faces of Barnes and Clark alone are worth the price of admission. Dancers often ignore facial expressions, but in Happy Hour, the faces are crucial to the story, and they’re pure gold. Yet of course it’s not just their faces, their whole bodies relate their predicament — a downward gaze, slumped shoulders, physical hesitation. These “men” feel beaten down, and they yearn to break free of whatever is holding them back. They do break free occasionally, dancing their hearts out and singing their hearts out in a memorable final poignant and oddly triumphant karaoke duet. 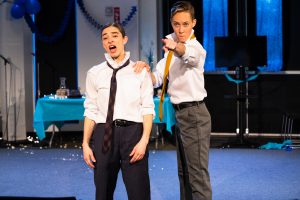 The pair of suited guys are rivals when it comes to romantic pursuits. They compete with each other, singing and sliding across the floor, with their eyes on a female prize. Someone (Clark) emerges victorious, walking away with an audience member who was patiently wooed by them both. Their behavior is unbecoming, particularly in light of #MeToo, but the bumbling buddies are nonetheless fairly likable. The audience recognizes their flaws and their desperation, and our hearts soften somewhat in response. We root for them, literally cheering at some points, even as we sort of despise them, too.

Barnes and Clark feed off the audience’s moments of delight, and the audience, in turn, becomes more and more enamored as the Happy Hour goes on. Barnes said in a post-show Q&A session that she believes many people find it easier to laugh at men than women. In any case, there were plenty of laughs, in addition to complex, challenging movement, and it all added up to the happiest happy hour I’ve attended in a long time. I wasn’t ready for it to end! This is a unique performance/party you won’t want to miss.