Peeping Tom, set up in 2000 in Flanders by Gabriela Carrizo and Franck Chartier, straddles the line between the ordinary and the extraordinary charting the peculiarities of human behaviour. In Mother (Moeder) the characters take on the big issues: namely birth and death, in a setting that switches from the real and tangible to the stuff of dreams in the blink of an eye.

It opens with death, a time of tense uncertainty as relatives eyeball the red light that signals the mother’s tenuous hold on life. The departed is shunted away and, in the natural order of things, it’s followed by a birth, a raucous event taking place in the same neat back parlour. And in the final moments, a body in mortuary style drawer appears and disappears as an endnote. 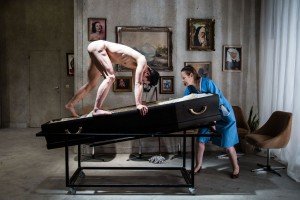 Centre stage is the art gallery, designed by Amber Vandenhoeck, the playground for myriad happenings, from the loving cleaning of the almost naked, living statue to falling in love with the coffee machine – a love of sufficient passion to blow a fuse. All the while in a cool detached voice the young man announces when the art gallery is open or closing, notes pilfering visitors and shifting canvases.

The small cast is brilliant in effecting transformations and appearing in multiple guises, that it is sometimes difficult to keep track of who is who, but the level of physical skill is uniformly phenomenal. A woman, cradling her baby, makes a flip to land with a crash on her back and is, in the next moment, on her feet – baby intact. You think you imagined it when she does it again, and again. The woman in high heels rolls dangerously over on her ankle in moves that would have mere mortals like us in A&E, but this is just one of a series of liquid moves. Words are sparingly used but the bodies speak for themselves in eloquent moves. 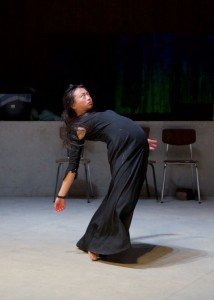 The sound score interspersed with snippets of classical music is effectively devised, especially the clever idea of imagined water used early on to initiate the audience into expecting the unexpected. The stage is dry, but each step or touch of the hand brings the swoosh of water. Welcome to the unstable imagined world of Mother: familiar enough to connect with and magical enough to enthral.