From 1977 to 1980, Mummenschanz, the Swiss theatrical company co-founded in 1972 by Bernie Schurch, Andres Bossard, and Floriana Frassetto, had a landmark New York residence in Greenwich Village, wowing audiences with its unique form of silent ingenuity. The company has now returned to New York for the first time in four years for a two-week run (plus a week of previews) at the Gerald W. Lynch Theater – which is within shouting distance of Lincoln Center, should anyone feel the need to make a sound. 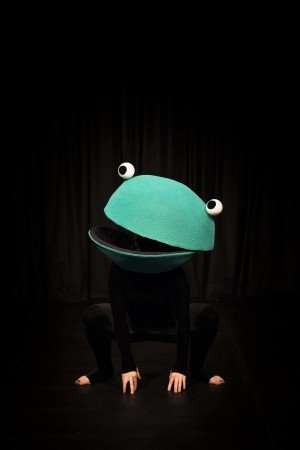 Frog, from the Mummenschanz program
“you and me”
Photo by Marco Hartmann

The derivation of the company’s name is not indicated in the program notes, but it appears, from various online sources, to be a combination of the German for “mummery” (loosely, mime artists) and “schanz” (equally loosely, a defensive barricade). Combined, these words accurately describe the group of six mime performers who are “protected,” and confined within, an outward shell. The company’s initial name was Mummenschanz Mask Theater, and the word “mask” further qualifies, and in an expansive sense, defines it. Essentially, the six Mummenschanz performers (including Frassetto, the sole surviving founder) are encased within shapes of flexible coverings that resemble recognizable objects – most of the time. 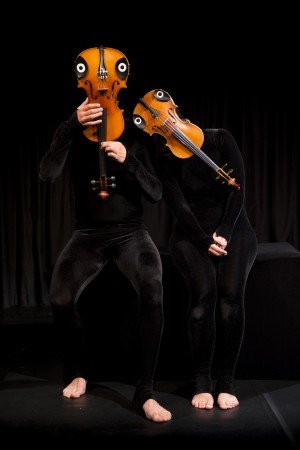 Violins, from the Mummenschanz program
“you and me”
Photo Marco Hartmann

But Mummenschanz’s theatrical significance is far deeper than simple word definitions might convey. These silent actors use movement (more limited than “choreography” in the usual dance sense), ingenuity and incomparable skill to animate seemingly inanimate objects: they create characters from blobs of shapes, with discernible personalities (happy, sad) and objectives. Balloon-like “hands” become forms for communication, for example, and playful looking but undefined spherical globs of nothing, when pinched and pulled and otherwise manipulated from within, become faces that make faces, that bounce other balls (sometimes into the audience), that interact with each other and the audience, and that dance their own kind of dance and make their own kind of music.

Reviewing Mummenschanz is a bit difficult. The show, titled you and me, is a collection of representative skits (Mummenschanz’s Greatest Hits, if you will), as well as some new ones. But the skits aren’t titled – at least none are conveyed to the audience – and describing them in detail is necessarily limited to a gross overview. 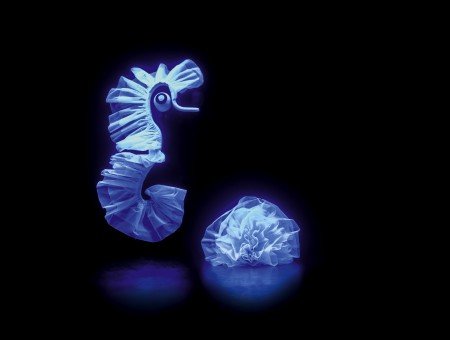 you and me, from the Mummenschanz program
“you and me”
Photo by Marco Hartmann

The show opens with a projected hand drawing what appear to be doodles on a blank piece of paper. [The “owner” of the disembodied hand, and the projector that transmits the forms he or she creates, is hidden (not very well) behind a curtain barricade in the stage right wings.] These doodles become recognizable shapes and forms, and this humorous prologue of hands and the forms segues seamlessly into the live performance, which, not surprisingly, features an initial skit that involves, to paraphrase Neil Diamond, hands, touching hands, reaching out, touching you, touching me. 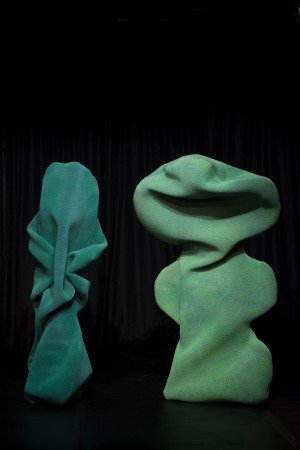 Leaves, from the Mummenschanz program “you and me”
Photo by Marco Hartmann

Of all the skits, my favorite is the one that required the least physically extensive “mask”: two actors with their upper bodies encased in violin-shaped string instruments (the skit is called “Violins”), playing to, and eventually with, each other (including a curiously exhilarating one bow duet). But there are many “favorite” skits to choose from, including a nondescript form that shape-shifted into a seahorse, accompanied by what might be a clam shell (and identified as “you and me.”

One caveat: Mummenschanz appeals to children and adults of all ages and backgrounds, but its pace is somewhat like an elephant walk. With changing into and manipulating those oversized forms (think a dozen or so costume changes over the 90 minute presentation, including into and out of forms the size of small blimps), that shouldn’t be unexpected, and under the circumstances, the show moves from skit to skit almost imperceptivity and seamlessly. Indeed, the sole opportunity for the actors to take a break – usually an intermission – here is covered by one performer silently interacting with two young audience members brought onto the stage in front of the closed curtain, providing their parents with a treasured photo op in the process.

With that minor caveat, you and me is great fun for you and me and anyone in the vicinity with an imagination and a sense of humor. It’s not mime, it’s not dance, it’s not theater, it’s not comedy, it’s not tragedy, it’s all that and more. It’s Mummenschanz. And it’s in residence at the Gerald W. Lynch Theater until July 22.