Zhang Yimou’s acclaimed 1991 movie Raise the Red Lantern is in large part responsible for my love of Asian cinema. I can still recall scene after scene of the film’s stunning visual imagery. Beyond the film’s beauty, and beyond the emotional anguish so well portrayed, I sensed subversiveness and defiance. When I learned about a ballet of the same name adapted and directed a decade later by none other than Zhang himself, my first thought was why would China want to support such an endeavor? The film came across to me as pointing a critical finger at Chinese society and politics, and it must have struck Chinese censors the same way because it was banned in China for a period of time. I found it confusing that the National Ballet of China would embrace the controversial story, based on Su Tong’s novel Wives and Concubines, and even more confusing that the company would choose this ballet to tour internationally (Raise the Red Lantern was last at the Kennedy Center in 2005).

Having seen the ballet, however, I understand. The ballet’s plot is not nearly as complex as that of the film, and the story has been significantly tweaked. Not surprisingly, there’s little to condemn China in the ballet version of Raise the Red Lantern. One can easily chalk up the miserable lives of the sexually enslaved concubines to China’s past and see the ballet instead as offering, in contrast, praise of current Chinese leadership and the much more liberated position of women today. Also celebrated at the forefront of the ballet is Peking Opera, something that the Chinese can proudly claim as part of their cultural heritage. Opening night, following on the heels of the Lunar New Year, featured introductory remarks by the Kennedy Center’s President Deborah F. Rutter and the Ambassador of the People’s Republic of China, Cui Tiankai. 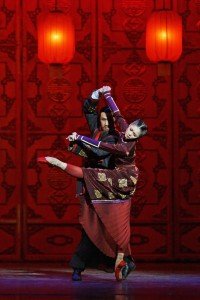 Although the content is watered down, the ballet isn’t exactly tame. As in the film, there’s a thoroughly tragic ending. Yet it’s a tragedy of the sort Western ballet audiences know well. Raise the Lantern focuses on love and betrayal, themes classical ballet has long addressed. The National Ballet of China’s Raise the Red Lantern is a ballet with a distinct Chinese flavor, but it’s also one audiences outside of China can easily relate to and enjoy.

Predictably, given Zhang’s eye for detail, Raise the Red Lantern delivers incredible visual richness. The ballet pops with color and bold design. The stage design (by Zeng Li) and costumes (by Jérôme Kaplan) are especially captivating. Zhang designed the lighting, and it’s lovely. Of course red lanterns dominate the stage. Also wonderful was the performance by guest Peking Opera actress Jia Tingxin. Was the ballet an excuse to incorporate traditional Chinese opera into the mix? Probably so, and the ballet is better for it. 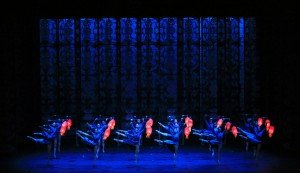 What Raise the Red Lantern lacks, unfortunately, is strong choreography by Xinpeng Wang (original) and Wang Yuanyuan. The choreography keeps the story flowing, but overall, save a few nice moments of partnering, it doesn’t thrill. The dancers are accomplished, to be sure, but other than executing great leg extensions, it’s difficult to discern the extent of their technical skills. As for their acting, the dancers were fine, but few showed a level of passion that that grabbed me. In fact, if I were to pinpoint what I felt I missed most in this production, it would be letting loose. The dancers remained extraordinarily composed, almost mechanical. Ballet seemed to be a mere tool for telling the story, rather than something absolutely alive within the dancers.

Raise the Lantern, nonetheless, did occasionally pierce my heart. It’s in its most tragic moments that the ballet succeeds. The end of Act II and Epilogue both leave the audience reeling. Just prior to intermission, there’s a rape scene, tough to watch and heartbreaking. When the young concubine, after a brave struggle, crawls from underneath a huge silky red piece of fabric and draws it around her shoulders, the audience shares her sense of shock. Likewise, the ballet’s final scene hits hard. As an ill-fated trio fatally collapses, a stream of male dancers strike a white scrim with huge sticks and cover it in red marks, symbolizing blood. They loudly smack the backdrop, effectively mimicking the actual violence that kills the three victims and leaves them in a pitiful heap onto which glittering snow falls. 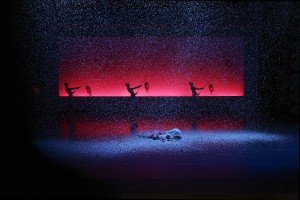 See the National Ballet of China’s Raise the Red Lantern for its glimpses into Chinese culture, but see the Zhang Yimou’s movie for its superior artistry and biting message.