Although it doesn’t seem possible, the April 4, 2018 performance of Nederlands Dans Theater (NDT) marked the company’s Kennedy Center debut. NDT was founded in 1959, so next year will be the renowned dance company’s 60th anniversary. I don’t know why it’s taken nearly 60 years for NDT, which tours widely around the world, to make it to the Kennedy Center, but I’m glad the company finally arrived. NDT’s performance, as I had hoped, given the company’s stellar, cutting-edge reputation, was riveting.

I was a little surprised, though, that after waiting so long to see NDT in DC, the company did not choose to perform any of its older, incredibly famous pieces, particularly those by Jiří Kylián. Instead, the program consisted of two works by Sol León and Paul Lightfoot, both former NDT company members who began creating works together for NDT nearly 30 years ago and are now the Artistic Advisor and Artistic Director, respectively, and serve as NDT’s house choreographers, and a piece by Canadian Crystal Pite, who has been an associate choreographer with NDT since 2008. The works were engaging. Still, I longed to see the exceedingly lovely NDT dancers, who hail from a host of countries, perform some of the Kylián works so strongly identified with NDT. 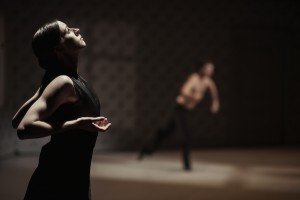 Shoot the Moon won the top Dutch prize for dance production when it debuted, and I understand why. It’s a work that’s full of creativity and emotion. Philip Glass’s music (Movement II from Tirol Concerto for piano and orchestra) is unmistakably Glass, and it’s haunting. Shoot the Moon incorporates live video, which is interesting, but the work would have succeeded without it. To me what’s key about Shoot the Moon is the intimate relationships depicted. Couples have a simmering tension underneath their more composed exteriors. 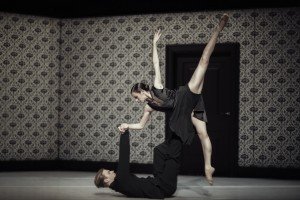 A rotating set turns showing off three pie-piece rooms. The rooms have black and white damask wallpaper, plus a door and in some cases a window. In each room, couples communicate their hearts cautiously, and then incautiously with mouths exaggeratedly agape. The world is domestic but not tranquil. Internal chaos bubbles forth and manifests itself in movement. Pale dancers move stiffly like mechanical dolls, and then in the next second they lean far back in liquid Matrix-like poses. Frequently matchstick legs are kicked up to the ears or to the back in a high arabesque. Sometimes dancers literally climb the walls. One man’s feet travel upward while he balances on a single arm. When the cameras zoom in, they project close-ups on two large screens above the rooms, providing a changed perspective. The audience sees an eyeball spying through a doorway crack, a spooky face, an elegant duet.

Shoot the Moon is mercurial, dramatic, and totally captivating. Toward the end, a dancer walks backward into the arms of another as if pulled by a magnetic force. I was left breathless at the beauty and depth of this work, and throughout, I found myself unconsciously nodding, connecting to the stories. 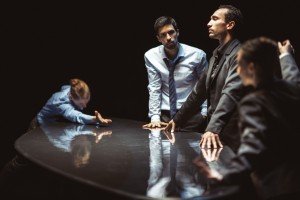 Pite’s work, The Statement, quickly grabbed me as well. Like with Shoot the Moon, I’d never seen anything quite like it. The music, by Owen Belton, sounds spacey, and a large dark shape that reminded me of an oversized range hood presses down from the ceiling and hovers above a long dark conference table (decor by Jay Gower Taylor). The dancers wear business attire — button-down shirts and pants. Suddenly a voice booms: “Oh God, oh God, oh God.” Around the table dancers gesture to weighty but witty dialogue by playwright Jonathon Young. They cartoonishly lean forward and back against the table, place hands in pockets, arch fingertips on the table’s surface, sharply turn heads, roll shoulders across the table’s edge, and the effect is hilarious. 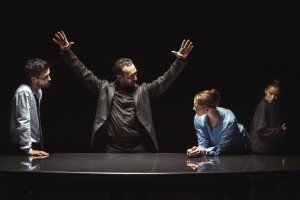 One of the dancers reveals that he was sent from “upstairs.” “I report on you,” a dancer later says to the guy from upstairs. The gestures become larger. Dancers stand on the table and appear to float above it, throw their bodies across it like a slide, and huddle under it. The situation escalates. For me, when the voices disappeared, I was surprised that I missed them. Somehow, the dancing started to make me weary. The Statement, as it progresses, doesn’t carry the same level of engrossment as its wildly funny and provocative beginning, but even so, the work is commendable. Although there’s some sort of business crisis afoot, which seems to demand immoral actions, I couldn’t help but think the work symbolizes more than questionable business practices. Is The Statement about war and humankind?

The last work on NDT’s program, Singulière Odyssée, was the most recent. The work is set in a train station waiting room that according to the program notes is based on Basel’s Art Deco Central Station. Max Richter was specially commissioned to provide the music, an eerie repetitive piece called Exiles. The setting evokes travelers, of course, and a good amount of nostalgia. And there are bittersweet goodbyes. Singulière Odyssée seems to be a meditation on memory and community.

A woman sits on a wooden bench, her back to the audience. The costumes (by Joke Visser and Hermien Hollander), long coat-like dresses for the women, conjure past decades. The movement style in Singulière Odyssée mirrors that of Shoot the Moon — elongated extensions, open mouths, puppet-like mechanics, and backward steps. A set of legs even crawls up a wall again. For some reason, the emotions here are harder to identify and feel less genuine than in Shoot the Moon.

When small colored leaves blow in through a set of doors and then fall from the roof inside the station, it’s not only lovely, you can almost smell the mustiness of the dying foliage. Dancers move under the leafy confetti, eventually joining in unison, shuffling over the fall carpet. A dancer’s hand flicks onto the wrist, as if tapping an invisible watch. Maybe because the choreography struck me as so similar to Shoot the Moon, or maybe simply because it was the end of the evening, my attention waned to a degree. In closing, the woman from the start of Singulière Odyssée mysteriously disappears and then reappears, waiting and watching with her back to us.

I was thankful to have finally seen NDT in person in DC, and I certainly hope they’ll return soon. I suspect that NDT’s visit inspired many local dancers and choreographers. The company was very warmly received, and it would be rewarding for the company’s American dancers (there are several) to have another happy homecoming. It’s also important for the DC dance community to be exposed to NDT’s unique artistry.