Matthew Bourne is a unique voice in the dance world: creating emotionally charged, accessible works which combine serious themes with humour. In Lord of the Flies, Bourne and his long time collaborator, the late lamented Scott Ambler, selected that story in order to excite and challenge a generation of young dancers around the UK. To take this approach to the next stage, Bourne selected Romeo and Juliet, the classic story of young love. He used the younger professional dancers in his company, New Adventures, brought in young artistic associates to help stage the work and introduced sets of young dancers, generally still in dance training, from each of the performance cities. So, definitely a worthy project, but the really good news is that this is a fine addition to the Bourne portfolio.

Apart from the central love story, Bourne retains several of the major characters familiar to us, but drops the Montague / Capulet conflict for the confrontation between the inmates and staff of an institute for detained young people. A single set by Lez Brotherston, with a raised walkway and separate cell areas for Girls and Boys with an open space for the action, provides a stark background to the drama. Prokoviev’s score has been reordered and arranged by Terry Davies for an orchestra of 15 using acoustic instruments, heavily amplified and works effectively. Nevertheless, I missed the rich orchestral variety of the original setting. 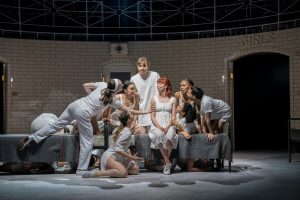 The opening sees the young inmates energetically moving to the Knight’s march, from the opening of the traditional ball scene, and it certainly grabs our attention with powerful gestures and spins in tight ensemble work, evoking desperate frustration at their incarceration. Early on we meet Juliet, Cordelia Braithwaite, and Tybalt, Dan Wright, cast here as a heartless guard, richly deserving his boos at the curtain call for his powerful portrayal. The frequently dark nature of this version is emphasised early on as Tybalt separates Juliet from the other inmates and takes her off-stage to abuse her with the Institute’s medical staff turning a blind eye. 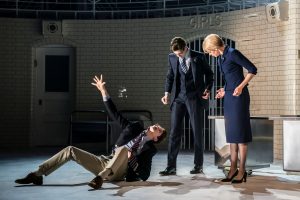 Senator and Mrs Montague, here painted as the most unsympathetic parents in any R&J production, take time off from waving to the crowds to bring their son, Romeo, to the Institute. Paris Fitzpatrick plays him as an awkward soul with odd, compulsive movements. His introduction to the Institute involves him being stripped to his pants by Mercutio, Balthazar his boyfriend and Benvolio, all to the music for our introduction to Juliet in the ballet version. At the end of this sequence, Bourne plays joking homage to the MacMillan version: where Juliet discovers her breasts, Bourne has Romeo covering his naughty bits. 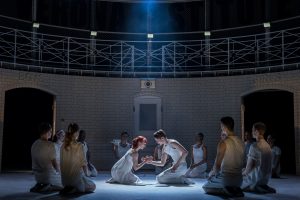 Father Lawrence is transformed into a well meaning woman priest, Bernadette, the only sympathetic adult on show. She organises a party, joking with Mercutio his friends as they set things up. The inmates now in their finery meet and dance in a stately fashion until an exhausted Bernadette makes her escape and then the dance become seriously raunchy, until a guard comes when there is an amusing instantaneous return to the stately style. In the midst of this Romeo and Juliet meet and time freezes. After the inmates are locked up again, the two lovers meet again and Romeo’s awkwardness and Juliet’s justifiable fear of men are cast aside in a passionate contemporary dance duet. Bourne’s kiss goes on and on and on including a sequence where they roll over and over. 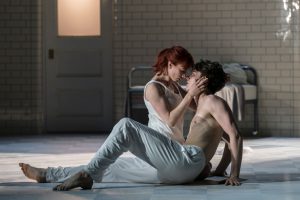 I won’t reveal too much of Bourne’s ingenious reworking of the latter stages of the plot. The death of Tybalt leads to the final tragedy with a most touching duet with the two lovers locked together on the ground. Cordelia Braithwaite is exceptional throughout and with Paris Fitzpatrick creates an emotional charge that had many in tears. All the young dancers seized the opportunity and impressed.

To add to the drama of the evening, the production was suspended after twenty minutes when Mercutio, played by Reece Causton, was injured. After an urgent call to Ben Brown, who plays the role in another cast, the production resumed after a mere 15 minutes. Brown performed the edgy role admirably and was rewarded by loud applause at the end.