I’ve only become acquainted with New Chamber Ballet for less than a year, but it’s been in existence far longer. Last month, the company, under the leadership of Artistic Director and choreographer Milo Magloire, celebrated its 15th Anniversary with two performances at its frequent venue, City Center’s Studio 5. While the program included two world premieres, the thrust of the evening was celebratory – of both the company’s strength and the departure of two of its long-affiliated dancers. 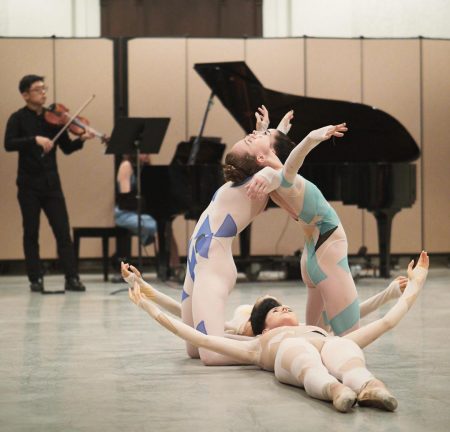 For me, aside from the obvious emotional outpouring with respect to the two dancers, Sarah Atkins and Elizabeth Brown, the evening’s highlight was an excerpt from a piece I saw at its world premiere, The Night. While I enjoyed The Night as a whole when I viewed it in September, this segment, titled Phantom, encapsulates the best of the larger piece, and on its own, separated from what I described as awkward moments of female / female partnering, is even more of a revelation, and even more of a stunning achievement. It was also an apt recognition, given the evening’s overall focus, of the bonding that has occurred among the company’s dancers. The cast (here limited to four of the five dancers who comprise the entire piece) – Amber Neff, Rachele Perla, Megan Foley, and Anabel Alpert – equaled the high caliber of their performances two months earlier. As at the premiere, company veterans Melody Faber on piano and Doori Na on violin provided the live musical accompaniment.

Klavierstuck (piano piece) premiered in 2008, and according to the program note, is considered NCB’s signature piece. It doesn’t rank with the best of those NCB dances I’ve seen, but I can understand why it’s remembered fondly, and why it was scheduled for this celebratory program: it featured the two dancers leaving the company. And unlike prior performances, this time it was danced in the round (or, more appropriately, in the diamond – the performing space that NCB has carved out of the stage area). Even though I’ve not seen the original version, I suspect that this iteration, with its closer physical connection with the audience, enhanced the presentation.

Choreographed by Magloire to Klavierstuck  IX by Karlheinz Stockhausen, it has, in an understated way, the sense of the classical combined with the sense of the experimental that is still evident in the company today. The choreography is simply movement to music (though it doesn’t mimic the composition), without any narrative, and the dance explores the connection between music and movement, which is nothing unusual. But Klavierstuck also explores the differences between music and movement, which to a large extent is.

The ballet begins with Atkins and Brown flanking Faber at the piano. Soon after Faber begins to hammer the keyboard (almost literally), Brown falls to the floor. After a round of soft music, Faber again bangs the piano keys, and Brown moves under the piano (I suppose either to find the source of the sound, or to take cover). Atkins joins her, they have a “Michaelangelo moment,” and then separate. Soon thereafter, both dancers hold onto the piano, put their heads against it, or cover their ears (or one covers another’s ears). Later in the piece, both put their heads under the piano.

There’s much more to the dance than these poses, but they are what make Klavierstuck different – even at times a little strange. And it’s not meant for comedic effect (a la Jerome Robbins’s The Concert). This is meant to be taken seriously. The program note states that the dance is “about listening” – and on an elementary level the exhibition of dancers holding their ears to the piano, or covering their ears, can certainly be seen as that. It may also be a commentary on Stockhausen’s composition (the program note also states that the piece is an “homage to the piano”), but to me the music is a convenient frame within which Magloire makes his point (though, as the note indicates, and as the choreographer’s welcoming remarks reinforce, the composer suggested this composition as a vehicle for the young choreographer). But I see it as more than that. It’s also a commentary on the nature and sources of inspiration, the dependence on or independence of one art form from another.

As for the bulk of the ballet, when they’re not looking for the origins of inspiration – or whether there’s inspiration at all, the movement is filled with independent, separate dance combinations by Brown and Atkins, including times when they seem to mirror, or, alternatively, compliment, each other – just as Stockhausen’s music does. The best parts of this aspect of the dance, however, is the gradually reinforced observation that dance may be seen as an encounter between dance and music in which there is an effort both to follow the music, and to distance itself from it.

The balance of the evening was celebratory, and included the two world premieres. The first, following Klavierstuck, was the premiere of a piece that Magloire created for Atkins, a 10-year company veteran who is leaving the area. Titled For Another Day, and choreographed to Schubert’s Moment Musical No. 6, For Another Day is lovely, lilting, and lyrical, with gentle circles and spins. Enhanced by a soft purple costume designed by Sarah Thea, Atkins circles the stage area as if visiting each edge of the diamond and dancing a farewell to the audience members sitting in each section. The dance culminates with Atkins center stage, descending to the stage floor, swan-like, and gradually morphing into a form that is both reverential and celebratory. It was an ideal way for both the audience and the dancer to say goodbye. 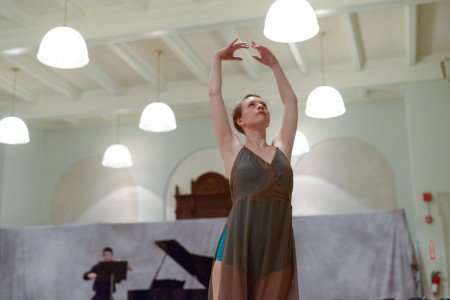 Following Phantom, Brown danced Magloire’s Morning Song, which I reviewed previously. Crafted to John Cage’s Cheap Imitations for Violin, on this occasion the piece was as much a valedictory as it was a thankful, ritual-like prayer, which is how I previously described it. As she did at the performance I saw last Spring, Brown at times looked like a supplicant, and at other times like a bird in flight. In this context, it was an appropriate way for this founding member of the company, and for the audience, to say goodbye to each other.

With the evening’s final piece, the premiere of As One, it was the company’s turn to say goodbye. To Dvorak’s Romance in F Minor, Op. 11, for violin and piano, the piece is perfectly described by Magloire in the program note as a celebration of “two dancers who have spent years of their lives shaping the identity, esthetic, and culture of the company, and who now hand it over to the next generation.” That it is, with the evening’s dancers circling each other, culminating with all six center stage, the four continuing members backing away and then kneeling to salute the two departing veterans. While that description may make the dance seem overly sentimental, that emotion goes with the territory. What came across was not so much sappy as heartfelt, with an abundance of mutually congratulatory hugs. Even for one relatively new to the company’s performances, it was an emotional experience to witness.

New Chamber Ballet: Worth the Effort