Any evening that ends with Balanchine’s Vienna Waltzes is bound to be a home run. In the final movement of this piece, the stage is awash with swirling white satin as courtiers dressed in black tails gallantly escort their partners around a glittering ballroom to the dreamy but lively music of Richard Strauss. Against the dazzling set by Rouben Ter-Arutunian, the dance is captured as a mirrored tableau and the black and white attire, the last costumes created by the legendary Karinska, fade into infinity. This five-movement work with its various incarnations of the waltz, resonates with the blush of courtship and youth. The lyrical music and magical, evolving sets transport the audience into another world of beauty and promise where dance is at the epicenter of society and romance. 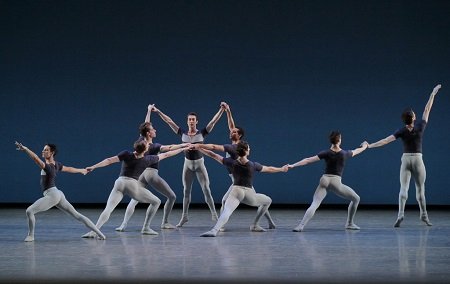 In this evening of All Balanchine, covering three works choreographed by the master between 1977 and 1978, Balanchine’s prolific range is on display. Two of the ballets sport classical themes but Kammermusik No. 2, set to the complex music of Paul Hindemith (brilliantly executed by pianist Cameron Grant) strikes one as refreshingly modern even in the year 2016. That work, expertly danced by Sara Mearns, Jared Angle, Teresa Reichlen and Amar Ramasar features an all-male ensemble whose counterpoint movements form a geometric backdrop of human structures and moving vehicles to the edgy, precise dancing of the principals.

The corps de ballet in Ballo della Regina performs an equally important role in the first ballet on the program, where twelve female dancers often combine with four soloists in admirably synchronized dancing. This classically-structured ballet, set to the music of Giuseppe Verdi, features principal dancers Megan Fairchild and Anthony Huxley at their best. Huxley’s compact speed and height is captivating but his partnering of Megan Fairchild is equally notable.

There has been much talk of the new generation of female principal dancers at City Ballet in recent years but it is veteran principal dancers Megan Fairchild, Sterling Hyltin and Maria Kowroski who truly shine in this all-Balanchine evening. Their dancing is poised, effortless and mature. With her quiet upper body and perfectly orchestrated gaze, Megan Fairchild has an uncanny ability to make it appear that she is watching herself dance. Sterling Hyltin is similarly weightless and engaging. Her solo in Vienna Waltzes is like a sprinkling of fairy dust on an already magical scene. Georgina Pazcoguin, Taylor Stanley, Lauren Lovette and Chase Finlay play wonderful character roles in the ballet with winsome expertise but when Maria Kowroski emerges, she is strikingly elegant. Like fine wine, these three veteran dancers have a purity of moment and a seasoned musicality and grace that comes with age and experience. It is thrilling to behold. Their partners, Anthony Huxley, Gonzalo Garcia, and Amar Ramasar, allow them to shine without stealing their spotlight.

The enchantment of live music by the New York City Ballet Orchestra, expertly conducted by Andrews Sills this particular evening, is the icing on the cake of a program that uplifts and transports.