New York City Ballet’s Fall 2016 season segued from a gala that emphasized its future to a series of programs honoring, and highlighting, some of Balanchine’s Greatest Hits – the operative word being “some”: a comprehensive presentation would require more weeks than there are in any given season. I caught up with three of these programs, as well as a repeat of one of them that included significant role debuts, over the past two weeks. One program featured ballets representative of the celebrated Balanchine/Stravinsky collaboration (“Balanchine Black & White: All Stravinsky”); another included pieces reflecting Balanchine’s visualization of music by Viennese composers (“Balanchine x Vienna”), and the third – Balanchine’s incomparable Jewels.

What does one say about ballet gems that are fairly well known to anyone anywhere in the world with more than a passing knowledge of ballet? Lots, as it turns out. Like the best ballets by any choreographer, a ballet will reveal secrets with each new viewing. But that’s not what I mean. In these programs, and with most of these ballets, Balanchine demonstrates what a ballet masterpiece means.

I’ve observed previously that one mark of a great ballet is that it enhances, rather than reflects, the music to which it’s choreographed. That is, it’s not just a matter of “seeing” the music, but envisioning it in an unanticipated and enlightening way. Stravinsky Violin Concerto, Duo Concertant, and Symphony in Three Movements exemplify this. In each of these ballets, Balanchine finds ways to see the music that would never occur to the average listener, or the average choreographer.

Stravinsky Violin Concerto was composed in 1931. To my musically unsophisticated ear, it’s somewhat of a transitional piece between early and late Stravinsky – less accessible than some, more than others. It’s been labelled neo-classical (of course, a term used to describe Balanchine’s style as well), and it’s certainly different from, say, the sound of music from the Classical or Romantic periods. But even assuming its relationship to music of the Classical period, it doesn’t sound that way – it sounds like…Stravinsky. Pulsing; angular; linear. 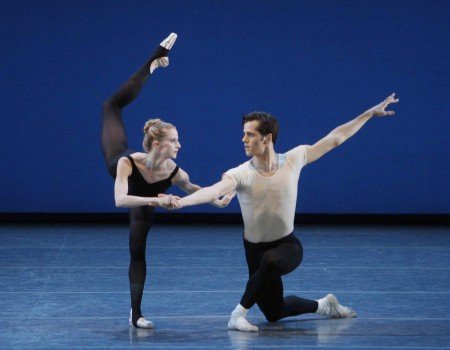 In his ballet, Balanchine shows that Stravinsky’s composition isn’t just that. Balanchine found the symmetry in the composition that may be difficult for the ordinary non-musicologists to hear; pulled it out; and emphasized it in his choreography. The ballet is a model of balance; in a sense, he benevolently imposes symmetry on music where symmetry doesn’t appear to exist.

Even more remarkable as a ballet – as well as a theatrical spectacle – is Symphony in Three Movements. It’s a ballet to get excited about no matter how many times it’s seen. Here, Balanchine doesn’t so much impose symmetry (though it’s there, just not as apparent) as he changes the anticipated appearance of the music – it doesn’t look like it sounds; it looks better. 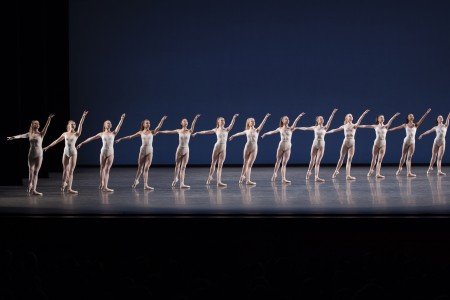 Stravinsky composed Symphony in Three Movements between 1943 and 1945, and it premiered in 1946. It has similar pulsing, angular, and linear qualities, to which he adds drama and a sense of cataclysm (Stravinsky reportedly referred to it as his “war symphony”). But there’s also a futuristic aspect to it (from the point of view of the 1940s); the dawning of a new age of impassively violent conflict, and a different kind of sociological – and musical – resolution.

Again, in his vision of Symphony in Three Movements, Balanchine enhances the music, weaving Stravinsky’s turbulent sounds into an extraordinary futuristic tapestry. And the piece is a monument (I’ve described it previously a Chrysler Building of a ballet) not only to 20th Century cutting-edge choreography, but to his genius.

Balanchine does the same thing – yet again – with Duo Concertant. Not only do his dancers emotionally (and physically) personify the musical instruments, they provide a minimal, but undeniable, narrative framework. There is no way that anyone could listen to Stravinsky’s composition and imagine what Balanchine imagined – and it’s now difficult to envision Stravinsky’s score differently.

Each of these pieces received superlative performances. On Saturday afternoon, Sterling Hyltin, Rebecca Krohn, Robert Fairchild (back full time – albeit temporarily – from Broadway’s An American in Paris), and Amar Ramasar led with their usual unusual competence and flair – which at this point is easy to take for granted. Last Thursday, Lauren Lovette, Chase Finlay, Sara Mearns, and Adrian Danchig-Waring assumed the lead roles (all but Danchig-Waring were role debuts). Lovette and Finlay performed magnificently – debuts or not. They’re a striking stage pair. Though she executed impeccably, Mearns had a more difficult time with it, making the choreography look clunky – and her curious, chalky make-up didn’t help.

Symphony in Three Movements is one of Hyltin’s finest roles, and she repeated her brilliant execution on Thursday – but the real story of that performance was Aaron Sanz’s role debut as Hyltin’s partner. Sanz delivered a memorable, near-flawless performance – and he and Hyltin looked like a natural pairing despite their height difference.

In Duo Concertant, Megan Fairchild (dancing wonderfully, again, this season) and Anthony Huxley paired well on Thursday, as did Ashley Bouder (in fine form in her first appearance following maternity leave) and Robert Fairchild on Saturday – with Fairchild taking the role to new heights of liquid expression. 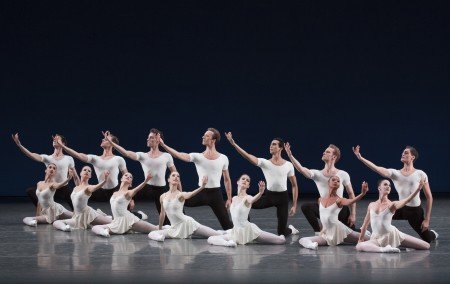 The other two pieces on the all-Stravinsky program – Monumentum pro Gesualdo and Movements for Piano and Orchestra, while no less choreographically ingenious – are more straightforward in terms of their visualization of the compositions. Perhaps that’s why I don’t consider either in the same league as the other three. Teresa Reichlen and Ask la Cour led the paired pieces on Thursday; Krohn and Russell Janzen (in another remarkable role debut) on Saturday. All did superlative work. 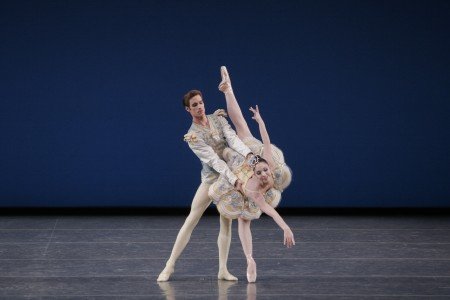 The “Balanchine x Vienna” program, though less spectacular to me, was no less brilliant choreographically. Finding symmetry and balance in a Stravinsky composition may be a tougher road to hoe than in one by Mozart, but reflecting Divertimento No. 15’s inherent balance and symmetry and visualizing it as Balanchine does is a singular accomplishment. In the opening movement, Balanchine provides a movement kaleidoscope of invention and intricacy. But to me, his six Variations, and the duets in the Andante movement, take the ballet to a higher level. As Mozart creates themes and variations on them, Balanchine does the same choreographically. Nothing new there. But the six variations, for example, don’t just reflect the theme’s evolution – they compel the viewer to see the music in an unanticipated way. That they also are early examples of Balanchine’s wicked neo-classical electric-charged footwork (the ballet was choreographed in 1956) is a bonus. Each of the variations was danced with marvelous flair by Lauren King (First), Hyltin (Second), Ana Sophia Scheller (Third), Abi Stafford (Fourth), Andrew Veyette (Fifth), and with particular abandon and impossible phrasing, Tiler Peck (Sixth). Daniel Applebaum and Andrew Scordato completed the lead cast. 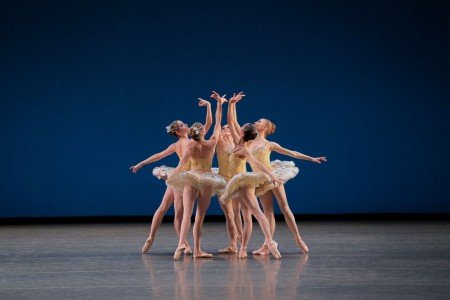 Episodes, choreographed to excerpts from orchestral works by Anton von Webern, is a more difficult ballet to appreciate because of the nature of Webern’s music, which reflects the influence of Arnold Schoenberg and Alban Berg, among others. The music sounds even more ascetic than it might otherwise when it immediately follows Mozart. Balanchine’s almost painful-looking choreography follows the Webern painful-sounding musical episodes, and it too, is somewhat more difficult to take by the average member of the audience looking to be entertained. Nevertheless, the leads (Megan LeCrone and Zachary Catazaro, Claire Kretzschmar and la Cour, Ashly Isaacs and Taylor Stanley, and Krohn and Danchig-Waring) were painless to watch – and Kretzschmar always manages to light up the stage with a ready, magnetic smile regardless of the rigors of the choreography.

The challenge of Episodes perhaps impelled the audience to be particularly receptive to Vienna Waltzes, Balanchine’s grand salute to the waltz – and to the fin de siècle Viennese society in which it flourished. Abetted by the magnificent evolving sets by Rouben Ter-Arutunian, and Karinska’s sensuous period costumes, the piece is a delectable sacher torte of a ballet –rich, sweet, a little decadent, and breathtaking to visually ingest – and the audience gave the dancers an uncharacteristic (for NYCB) standing ovation at its conclusion. Although the entire cast excelled, I was particularly impressed by Reichlen’s “black widow” in the Gold und Silber Walzer. I’d not seen her in this role previously, and she delivered a portrayal steeped in mystery and layered with fire and ice.

Jewels will celebrate its 50th Anniversary next year, and I anticipate that it will be commemorated then with festivities and gala performances appropriate for the occasion. I’m sure I’ll have more to say about Balanchine’s ground-breaking ballet – the first evening-length plotless ballet – at that time. For now, suffice it to say that although it doesn’t have a describable narrative, Jewels tells a relatively distinctive though non-specific story. Three of them. As Balanchine explores the sense of each jewel, and follows the direction of the accompanying music, he leads the audience into three distinct visual and emotional worlds, each spectacularly visualized.

It would be difficult, regardless of the star power of dancers who will doubtlessly help celebrate next year’s milestone, for any cast to exceed the brilliance of Sunday afternoon’s cast.  Peck and Ramasar, and Krohn and la Cour, led Emeralds. Krohn melted though the choreography with a combination of aquatic fluidity and tensile strength. Nothing unusual for Krohn, one of NYCB’s more underrated principals, who quietly excels in every outing. Peck, who debuted in her role a few days earlier, took her portrayal to a remarkable level with her usual flair and always exceptional phrasing. Erica Pereira, Indiana Woodward, and Antonio Carmena were featured as well, and all delivered exemplary performances.

In Rubies, the story wasn’t so much the leads (Bouder and Veyette) – both of whom danced to their usual high level (with more of a sense of mutual teasing than on the choreography’s inherent sensuality), but Reichlen’s performance. Reichlen stole the piece, if not the evening as a whole, attracting her adoring supplicants with benevolent, but incontrovertible, dominance; the sun to their planets. Her performance was extraordinary. What a season Reichlen is having! 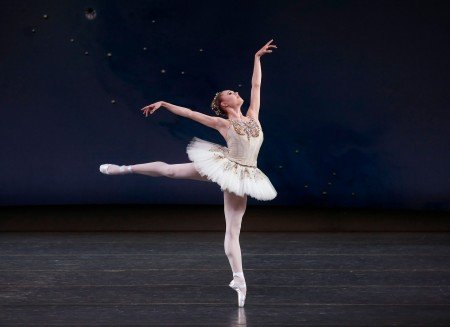 And then there was Diamonds, Balanchine’s paean to Russian classical ballet (which includes nods to his Theme and Variations – if you’re going to steal from someone, might as well steal from the best – himself). I’ve been critical of Mearns’s performances in Diamonds previously as being too full of pathos, too much the mournful, mannered Odette where regality is what’s called for. But on Saturday (and ably partnered, as ever, by Tyler Angle), Mearns delivered a stunning performance, exemplary and memorable in every way.

Finally, a word about NYCB’s corps, and the company’s astounding embarrassment of riches. In every piece I’ve discussed, the corps as a whole performed at an exceptional level. That’s nothing new. But it’s gotten to the point that every time I attend a NYCB performance I see another dancer with obvious potential beyond corps level who I’d not previously seen – including several apprentices not yet members of the company (the Emeralds corps included four apprentices, as well as dancers new to the corps within the past year – several of whom are too “new” to have photos on the NYCB web site). I’m sure I’ll be focusing on them in detail in reviews to come.