Composer’s Holiday
Kammermusik No. 2
Opus 19/The Dreamer
Symphony in C

The New York City Ballet (NYCB) has been coming to the Kennedy Center in Washington, DC, for over four decades. It was great to welcome the company again this spring, when the cherry blossoms were at their peak. The company performed two diverse programs of short ballets, both of which were enjoyable, but Program B, which is the subject of a separate review, came out ahead in my view.

Program A’s first two works, although reasonably strong, didn’t particularly appeal to me. That doesn’t mean, however, that the dancing or the choreography was substandard. The opening work, Composer’s Holiday, choreographed by Gianna Reisen, a 2017 graduate of the School of American Ballet, now just 19 years old, is pleasant. Reisen is the youngest choreographer to create a ballet for NYCB, and it’s also her first ballet for a professional company. That’s an impressive accomplishment, and one that I applaud. The ballet world could use more female choreographers, and I hope Reisen continues to generate new work. 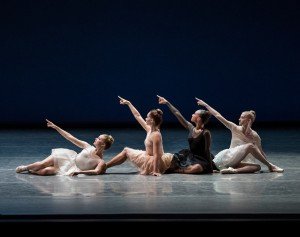 Composer’s Holiday is a very fine first ballet, and there’s no doubt Reisen is talented. The ballet, featuring handsome short billowy dresses by Virgil Abloh of Off-White and music by Lukas Foss (Three American Pieces for Violin and Piano), is fast moving and zingy. Although youthful, it doesn’t feel childish. There are many cheerleading-like elements — a group holding a single dancer aloft, then tosses and catches her (accompanied by an audience gasp); women with knees tucked to their chests are grasped snugly by male partners who merely look as if they caught the women after they’d fallen from some height, dancers fly in peppy bent-legged jumps. The pointing and pushing sort of eluded me, though. The meaning of these gestures, if there was one, wasn’t apparent to me. 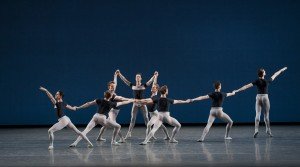 Kammermusik No. 2, choreographed by George Balanchine to loud clashing music by Paul Hindemith, followed. It’s also zingy, and not terribly exciting to me, either. Two ballerinas in pale blue (Abi Stafford and Teresa Reichlen) take charge. A line of male dancers with conjoined arms form a kind of baseline against which the pair and their partners move. Of the two female leads, Reichlen displayed more energy and stole my attention. Dancers use flexed feet fairly frequently, even spinning on the back of their heels. The men hop about with arms stretched out like airplane wings. 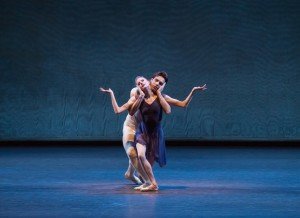 After the first intermission was Jerome Robbins’ Opus 19/The Dreamer, beautifully danced by Sterling Hyltin and Gonzalo Garcia in the lead roles. They both expertly conveyed emotion (longing and tenderness) and executed with crisp technique. Hyltin’s pointed feet were daggers. The shrieking strings of Sergei Prokofiev’s music (Violin Concerto No. 1 in D major) were piercing, too (violin solo by Kurt Nikkanen). Hyltin’s impossibly silky smooth extensions made her a believable illusion. 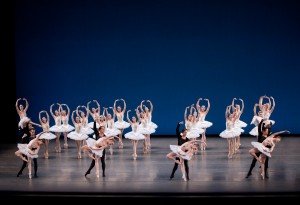 Balanchine’s Symphony in C, to George Bizet’s glorious Symphony in C Major, is what the ballet patrons were waiting for, though. When the curtain rose after the final intermission, the audience audibly “oohed.” New costumes by Marc Happel include Swarovski crystal crowns, headpieces, and earrings, and they sparkle along with bright white fluffy tutus. This is a resplendent ballet, and one simply melts into its staggering loveliness. It also shows off NYCB’s depth as more and more dancers enter the stage. The power of unison among so many dancers is astounding. There’s nothing like a dizzying sea of arms of legs and legs reaching together in sublime harmony. 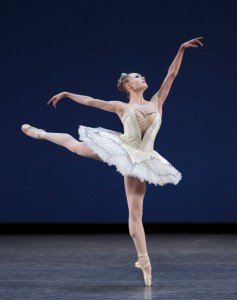 Of the four movements, my favorite by a mile on opening night was the Second Movement: Adagio splendidly danced by Sara Mearns and Jared Angle. Mearns gave me goosebumps. She was so calm and commanding, lithe yet strong, and seemingly flawless, that I was glued to her. I also was thoroughly drawn in by the First Movement: Allegro Vivo, nicely danced by Ashley Bouder and Tyler Angle. The fact that two dancers toppled (one female dancer from the corps somehow slipped and landed on her rear, a male principal dancer faltered while landing in a kneeling position and set a hand down on the floor) didn’t mar the overall magnificence of the performance.