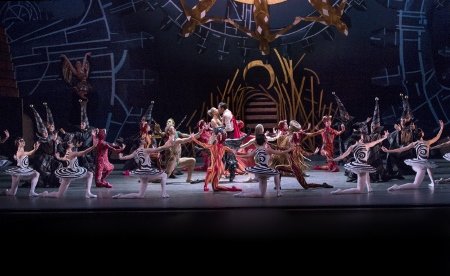 Ash
After the Rain (excerpt)
The Infernal Machine
Tschaikovsky Piano Concerto No. 2
The Most Incredible Thing

Coming on the heels of the Mariinsky Ballet, the New York City Ballet (NYCB) had a tough act to follow. That I walked away disappointed from NYCB’s mixed program is perhaps due to the proximity of the performances. My disappointment was also due, I’m sure, to the fact that young choreographic star Justin Peck’s first narrative ballet, The Most Incredible Thing, was making its Washington, DC debut, and it fell flat for me. I have no superlatives to give it, unfortunately. The only things I liked about The Most Incredible Thing, were Bryce Dessner’s magical music and the costumes for the Nine O’Clock Muses – mesmerizing black and white swirled tutus. The rest of the costumes, by Marcel Dzama, although inventive, were so cartoonish that they detracted from the dancing and actually disguised a lot of the movement. Tiler Peck’s spunky Cuckoo, who popped out and flittered around at both one and ten o’clock, flapped her arms but with the draped fabric wings, it was hard to make out exactly what she doing other than merely flapping. I have no blame for the dancers. Mr. Peck’s choreography neither effectively told a story nor included inspirational dancing. I felt like I was watching a circus from bygone days with outlandishly dressed dancers doing banal tricks. It was colorful, but ultimately uninteresting, and the overall composition made little sense. For all the money purportedly spent on it, it looked juvenile, and I was glad when it was over. I wouldn’t care to see it again. However, I send my sincere encouragement to Peck for his future endeavors.

The first part of the program fared little better. The best thing about the program’s opening work, Ash, choreographed by Peter Martins, was Taylor Stanley, who alone kept my rapt attention with his solid and strong performance. In Ash there are a lot of swinging arms and high kicks. The attitude is light. Yet like a dish with too many spices, the flavor is muddled. With all the skips and flourishes and fast movement, the dancing appeared hurried at times, even sloppy. 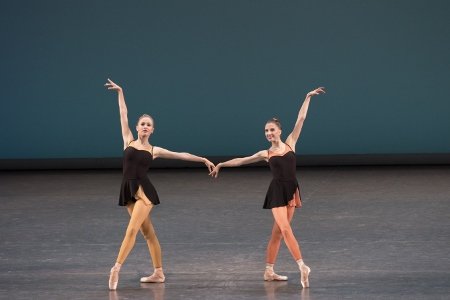 I’ve said before that I’m sick of seeing dances set to music by Arvo Part. I like Part’s music, but in my opinion, there are simply too many works out there using it. So, I was predisposed to dislike the excerpt from Christopher Wheeldon’s 2005 work After the Rain, because there it was again, music by Arvo Part, the ubiquitous Spiegel im Spiegel. Tiler Peck, with her hair down, and Jared Angle, in their duet, didn’t generate any particular passion. They titled back and forth, leaned on each other, and shared a lot of intimate skin on skin contact, but alas, they were unconvincing as lovers. I appreciated a few small moments, like a lift in which Peck switched the position of her leg, moving it in front and then behind Angle’s arm, and at the end, when Angle picked up Peck, who remained in a backbend, placed her again on the floor, and slid underneath her.

In another duet, The Infernal Machine, by Martins, to music of the same name by Christopher Rouse, Ashley Laracey and Amar Ramasar looked like they were lost in space as they executed some odd lifts. The pair wore dark costumes with odd rips, unflattering bulges, and the illusion of boots (costumes by Catherine Barinas). The challenging music, full of screeches and clomps, was more intriguing than the dancing.

What worked on the program was Balanchine’s Tschaikovsky Piano Concerto No. 2. I think it worked because of Balanchine’s enduring genius. But then, I’m a sucker for anything Balanchine, and I generally adore pastels and tiaras. The musicality of the choreography is delightful. And, the dancers here looked confident and refined. The bourrees were breathtaking, the side arches of the upper bodies were divine. I enjoyed Ana Sophia Scheller, especially, as her long limbs make long lines that are beautiful to behold, but her face never quite expressed the joy inherent in the work.